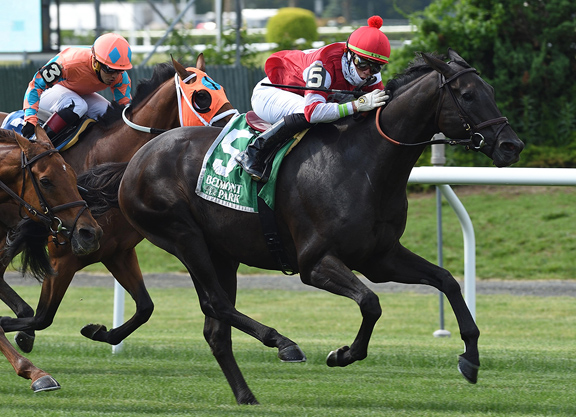 Rare is the high-caliber turf contest in New York that doesn't go through Chad Brown and the GI Manhattan S. is no exception. The reigning four-time Eclipse winner as outstanding trainer has the favorite, multiple graded stakes-winning Instilled Regard (Arch). Last seen getting a 102 Beyer when winning Belmont's June 6 GII Fort Marcy S. at a furlong shorter, Instilled Regard has won graded stakes three years running and looks to remedy the lack of a Grade I victory on his resume here.

Instilled Regard's reopposing stablemate Devamani (Fr) (Dubawi {Ire}) was a neck behind in the Fort Marcy, also notching a 102 Beyer, and a nose away from the win in his other 2020 start, the Feb. 8 GIII Tampa Bay S. He looks to be an improving sort who has a previous win over this distance at Belmont. The third of the Brown entries, Rockemperor (Ire) (Holy Roman Emperor {Ire}), placed in last year's GI Belmont Derby at this distance in his first U.S. start and was last seen a nose behind United (Giant's Causeway) in the May 23 GII Charles Whittingham S. at 10 furlongs, although he was disqualified to third. He's looking for his first Stateside win in four starts, but has three graded placings in that time.

The Brown trio may be favored, but they'll have to get by Grade I veterans Sadler's Joy (Kitten's Joy) and Channel Maker (English Channel) first. The 7-year-old Sadler's Joy, a Tom Albertrani trainee, placed in two previous editions of the Manhattan and has won over this distance at Belmont, but generally prefers a little longer, as seen in his four graded wins which include the 12-furlong GI Sword Dancer S. He and the Bill Mott-trained Channel Maker both used the ungraded Tiller S. over 1 3/8 miles at Belmont June 4 as their wake-up call after brief freshenings with neither proving a threat that day. Channel Maker hasn't won in 13 months since taking the GI Man O' War S., but has a mountain of back class.