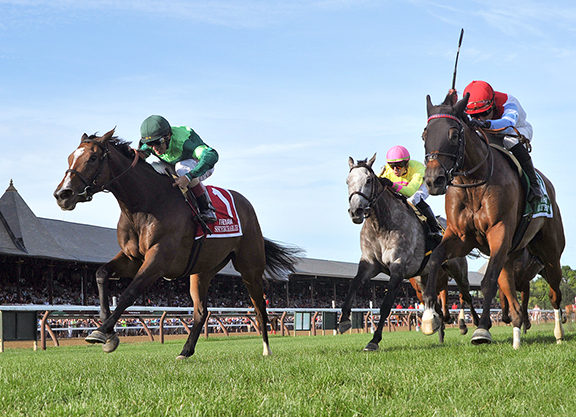 If the three-pronged Brown entry might have to play second fiddle in the Million, that will most certainly not be the case in Saturday’s GI Beverly D. S., as the conditioner shoots for a fourth straight success in the race and fifth overall since 2011. And a 1-2-3 finish isn’t entirely inconceivable.

Peter Brant’s Sistercharlie (Ire) (Myboycharlie {Ire}) looks the pick of the lot as she goes in search of a third Grade I since her transfer to the U.S. Runner-up to the late Senga (Blame) in the 2017 G1 Prix de Diane, she was the meat of a Brown sweep in the GI Belmont Oaks before taking ill and missing a large chunk of time. She nevertheless led home a stable triple in the GI Jenny Wiley S. first-up for nine months, missed by a head to Fourstar Crook (Freud) in an oddly run GII New York S. June 8 and overcame a wide run on the second turn to take Saratoga’s GI Diana S. by a nose July 21. Inflexibility (Scat Daddy) is still in search of a first graded win and was most recently second after leading late in the GII Dance Smartly S. at Woodbine June 30. Thais (Fr) (Rio de la Plata), co-owned by Brant, would do well to hit the board.

Euro Charline (GB) (Myboycharlie {Ire}) is the lone sophomore filly to win the Beverly D. and Athena (Ire) (Camelot {Ire}) will be well supported to join her. The well-traveled bay needed seven tries to graduate, but has been on the improve since. Fourth against her peers in the G2 Ribblesdale S. at Royal Ascot June 21, she was third against elders in the G1 Pretty Polly S. at The Curragh July 1 and backed up on six days’ rest to upset the GI Belmont Oaks at 10-1.

Daddys Lil Darling (Scat Daddy) merits a chance if she can work out a trip from the inside draw. Last year’s GI American Oaks victress made up the better part of 30 lengths to finish third, beaten 1 1/4 lengths in the New York, but managed to secure a handy position from the 12 hole in the course-and-distance GIII Modesty H. July 7 and was ridden out to take it by 2 1/4 very easy lengths. The waters are clearly much deeper here, but there are worse price plays than her.