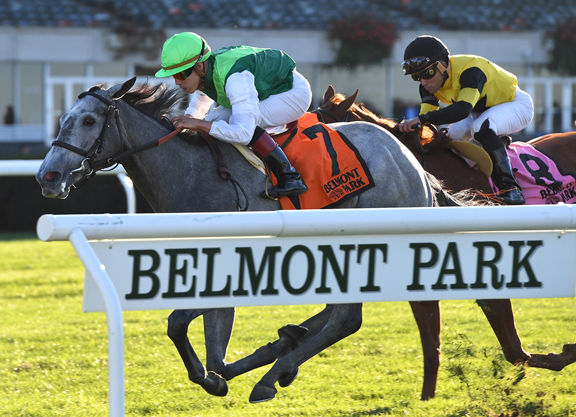 With four talented members of his star-studded stable signed on for this test, the main question facing Chad Brown Saturday seems to be not if he will win Belmont's GIII Intercontinental S., but which of his fillies he will win it with. Favoritism is likely to go to Significant Form (Creative Cause), who won this test last year. The gray also captured the GII Ballston Spa S. in August and the GIII Noble Damsel S. in September. She was seventh to Got Stormy (Get Stormy) when last seen in the GI Matriarch S. at Del Mar Dec. 1.

Newspaperofrecord (Ire) (Lope de Vega {Ire}) was perfect as a juvenile with three sensational victories capped off by a tour de force in the GI Breeders' Cup Juvenile Fillies Turf in 2018. She was unable to find the winner's circle in her three starts last term, finishing second in both the GIII Edgewood S. and the GIII Wonder Again S. The 'TDN Rising Star' was last seen finishing ninth in the GI Belmont Oaks Invitational S. in July and looks to get back on track in this return after 11 months on the sidelines.

“She's been training really well,” Brown told the NYRA notes team. “It's a good distance to start her back, we'll look at stretching her out to a mile and not go past that distance.”

The one Brown runner who is somewhat of a question mark is Viadera (GB) (Bated Breath {GB}), who makes her U.S. debut in this test. Previously trained by G. M. Lyons, the Juddmonte homebred won three times in Ireland, including the Cairn Rose S. in July. She was ninth in her final European venture in the Sovereign Path H. in September and receives Lasix for the first time here.