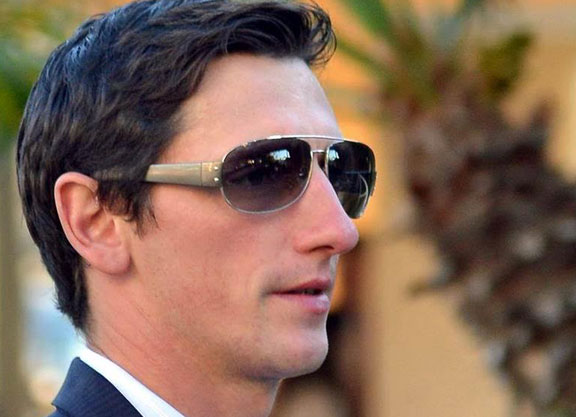 It is nearly always trite to elaborate on the benefits of hard work as it relates to success in any line of work, but it is worth being a bit banal in the Thoroughbred world; a sphere with interconnected pieces that rely on such basic diligence to spin from generation to generation, journeymen to apprentices and trainers to assistants who succeed them. One is never completely guaranteed prosperity when they ascend–no matter the legacy they may or may not come from–and fully realizing potential is nearly always born from understanding the symbiotic marriage of labor and luck.

Rodolphe Brisset has a crisp comprehension of this. A top assistant to Hall of Fame trainer Bill Mott for the better part of a decade and to two-time Prix de l'Arc de Triomphe winner Patrick Biancone for two years prior to that, the 33-year-old native of Tours, France, is venturing out on his own Apr. 1.

Brisset looks forward to the challenges ahead with the kind of initiative-enveloped optimism-meets-humility so often seen in the very best of his profession. An infectious personality–accent aside–with a naturally discerning disposition when it comes to horseflesh, he appears to have many of the tools required for a first-class conditioning career.

“Everything the last six years has been building toward this and I feel like I have a great foundation,” Brisset explained. “I have been lucky enough to travel with excellent horses and build connections and relationships with racetracks and the press and I had a great teacher in Mr. Mott. It's a big advantage when you have that much behind you and it's been a goal for me for a long time. It just took a little longer than I thought it would. I could have gone out on my own a few years ago, but I do not believe in doing it poorly. I wanted to mature and build this into the best opportunity for myself.

“At the end of the day, it may be actually easier to train on my own than leaving the team,” he continued. “It was very difficult and emotional to tell them I am leaving. We all work together and they are all great people; like family. At the same time, you have to think about what you want to do in the future. Everything fell into place, I met (fiance) Brooke, who has been very supportive, and I feel very comfortable.”

Brisset is in the process of developing his clientele and will be active at the upcoming Florida sales, starting with the Fasig-Tipton's Gulfstream Park sale Mar. 1 and then the OBS March sale two weeks later. As a head trainer, he will join an honor roll of ex-Mott assistants, including Ralph Nicks, Tom Albertrani and Seth Benzel.

“Mr. Mott has so much class and has been very supportive of me,” Brisset said of the three-time Eclipse Award-winning conditioner. “He said 'go for it' and he's happy for me. When you teach people and get them under your wing, you see them grow like I have for him and he wants me to succeed. When you're by yourself in a foreign country, you have to attach yourself to something and I attached myself to this team and learning how to be a good horseman and trainer.”

A former jockey and alumnus of renowned French academy AFASEC who became too heavy to ride before heading to the United States to fulfill his racing industry dreams, Brisset has been astride many top Mott horses and thus been integral to the development of some of the best American horses of the last decade. Apart from recently deceased Royal Delta, whom he considers his favorite, he also exercised such standouts as Tourist, To Honor and Serve, Emollient, Drosselmeyer, Close Hatches, Flat Out, Lea and Unrivaled Belle.

“I was very lucky to be able to work with such great horses and have a real sense for what a good horse feels like and how to develop them individually,” Brisset explained. “My approach can be a little different because I have done a lot of different things in racing, from being a jockey in Europe to training in America, as well as other things. I have tried to learn from and apply what I know as a rider to what I've learned from a master like Mr. Mott. If you can do that, you have a great combination.

“I learned from the boss that it is very important to have the right people behind me,” he continued. “I don't expect to have a huge stable immediately and even if April is a little slow, I think it will pick up. You don't want to go too quickly and get out of control, but I'm not afraid of being successful, either. I want to build from a really good base of clients and horses and have all the right working pieces–from grooms to paperwork and bookkeeping. I can grow from there.”

Brisset's launch will take place at Keeneland's spring meet and he hopes to set up shop in said establishment's Rice Road barn area. Such a location allows him to train in Lexington throughout the summer and remain central to an array of tracks, including Churchill Downs, Arlington, Kentucky Downs, Indiana Grand and Ellis Park. He also plans to be active at the claiming box to build his enterprise. After Kentucky, he will move his operation in South Florida for the winter.

Best and possible: two adjectives that when overlapped could sum up what the future may hold for Brisset and others who, at a relatively young age, seem to have figured out how to steady the scale between their actuality and ambition on the road to success. After all, luck–as the old hackneyed Branch Rickey phrase goes–is the product of design. Brisset is part of the next generation of racing and it will be exciting to see if the deck he stacks falls his way.

“My family doesn't come from racing, but I have been very lucky,” he concluded. “The good thing about America is that it doesn't matter what your name is or where you come from, it's about what you can do–and I really want to make sure I do it right.”