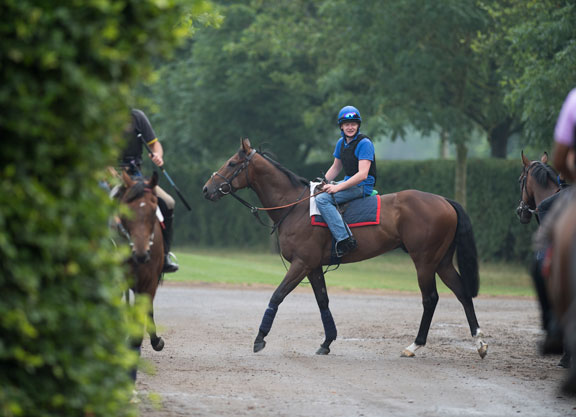 Friday of the Qatar Goodwood festival can mean only one thing. Shadwell's flying machine Battaash (Ire) (Dark Angel {Ire}) bids to follow where Tuesday's star Stradivarius (Ire) (Sea the Stars {Ire}) led by landing a third edition of one of the meeting's major prizes, this time the G2 King George Qatar S. over the furiously fast five furlongs he adores. In the form of his life this term, he took the G2 Temple S. at Haydock on May 25 before meeting his nemesis Blue Point (Ire) (Shamardal) in the G1 King's Stand S. at Royal Ascot on June 18. His two victories in this were achieved with a cumulative margin of 6 1/4 lengths and it is difficult to envisage anything other than another procession. “It would be an achievement and to get the record would be great,” trainer Charlie Hills said. “I can't see why it shouldn't happen.”

“Last year we were never 100% happy with Battaash–he took a long time to come in his coat and he was always a little a bit on edge in his training,” Hills added. “Ever since he has been back in training this year, he has been a different horse, a pleasure to train and to be around. I am not sure why, but Battaash does seem to love Goodwood and in his two previous runs there he has behaved very well. He is a tremendously fast horse–I think at Ascot he clocked 47 miles per hour between the three-furlong and two-furlong markers–and if we get fractions right, he will be a hard horse to beat. He does really come alive at Goodwood. He is quite small, quite nimble and maybe he does just handle the track better than some of those bigger sprinters.”

Away from the shadow that Battaash casts over the contest, there is a fascinating runner in Kin Hung Kei and Qatar Racing's 3-year-old Big Brothers Pride (Fr) (Invincible Spirit {Ire}), who issued his own bulletin to the sprinting world when scoring by four lengths in Chantilly's G3 Prix Sigy over 5 1/2 furlongs on Apr. 13. More international flavour is added by the ex-Toby Edmonds-trained Australian import Houtzen (Aus) (I Am Invincible {Aus}), who stumbled coming out of the gates when eighth behind Blue Point and Battaash at Ascot. “Sometimes these top sprinters can be difficult to handle, especially when they've travelled around the world, but she seems to have settled in really well,” her new trainer Martyn Meade said. “Her work has been very good and the Aquis [Farm Pty Ltd] boys are coming over, so we're all pretty excited. It's obviously a tough race, but if she can get a place we'll be delighted.”

The action starts with the G3 Theo Fennell Oak Tree S., with 'TDN Rising Star' Jubiloso (GB) (Shamardal) looking to build on her latest third in the G1 Coronation S. at Royal Ascot on June 21. Taxed by the mile there, Juddmonte's relative of Frankel (GB) is back at a more suitable seven furlongs on another day when the breeding operation could shine. “She's been working well at home,” Teddy Grimthorpe commented. “She ran really well at Ascot, but she was probably a little bit inexperienced there. She got a good run through and she came through travelling really well into the race, then just flattened out in the last part of it. She should have enough zip for seven furlongs and this race should suit her.”

Later in the afternoon, Juddmonte has the hot favourite for the G3 L'Ormarins Queen's Plate Glorious S. in Mirage Dancer (GB), the son of Frankel who was so impressive in this last year. “He really enjoys Goodwood and has come out of the Princess of Wales's S., where he put in another solid run, really well,” Grimthorpe added. “The great saying 'horses for courses' really applies to him here.”

Khalid Abdullah could also be celebrating after the G3 Bonhams Thoroughbred S. with the June 20 Britannia H. winner Biometric (GB) (Bated Breath {GB}), the half-brother to the high-class Phoenix Tower (Chester House) out of Bionic (GB) (Zafonic), whose only race came at this meeting. “Ralph [Beckett] has given him some time off after Ascot, because he had quite a hard race that day,” Teddy Grimthorpe said of the homebred. “He is stepping up to pattern company for the first time and it will be different to running in handicaps. He has been a bit of a dark horse, but he keeps on doing it in his race.”

Biometric renews rivalry with 'TDN Rising Star' Turgenev (GB) (Dubawi {Ire}), who he so memorably denied in the Britannia, wrecking Frankie Dettori's attempt to go through the card as a result. Godolphin's Art du Val (GB) (No Nay Never) is another intriguing contender coming off a win in the Listed Prix de Saint-Patrick at Saint-Cloud on June 30 and trainer Charlie Appleby commented, “Art Du Val has progressed with each run and goes into this race on the back of a nice win in France. This is a step up in quality, but he has done little wrong so far and deserves a crack at a group race.”