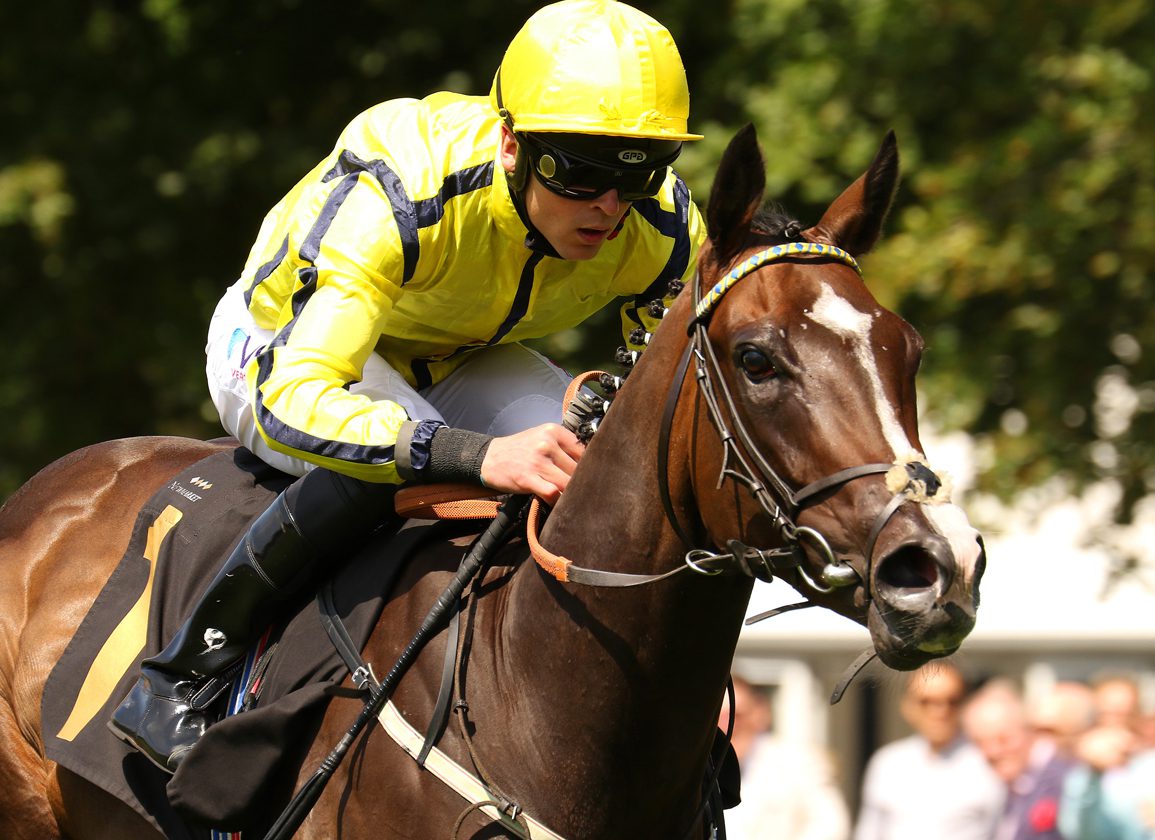 It's that time of year where initial promise either fizzles out or becomes the preface to something greater and early on Saturday we get to find out what 'TDN Rising Star' Bright Diamond (Ire) (El Kabeir) is made of in Goodwood's G3 William Hill Prestige Fillies' S. This is not generally one of the big 1000 Guineas pointers, but Billesdon Brook (GB) (Champs Elysees {GB}), Nannina (GB) (Medicean {GB}) and Gossamer (GB) (Sadler's Wells) won it this century en route to their respective tilts at the stars and there was a high-calibre feel to the debut performance of the latest Karl Burke juvenile special.

Off the mark by nine lengths over this seven-furlong trip at Newmarket Aug. 6, Sheikh Rashid Dalmook Al Maktoum's bay recorded a rapid penultimate furlong split on that occasion and provided the slightly easier ground doesn't compromise her she could start the day with a bang for her on-fire stable.

“We're on a mission to find out how good she is at Goodwood,” he said of the relative of the triple Group 3 winner Realtra (Ire) (Dark Angel {Ire}) whose rivals include Amo Racing's fellow 'Rising Star' and July 8 G3 Duchess of Cambridge S. third Queen Olly (Ire) (No Nay Never). “Obviously she was very impressive at Newmarket. We don't really know how good those were behind her, but you can't do any more than win like she did. I went up to see her and she is very very laid-back and relaxed at home, she doesn't sparkle anyway, she is just so laid-back. Everyone is guessing and I don't think Karl really has a clue.”

Five minutes after the Prestige, some choice Irish juvenile fillies are on display in The Curragh's G3 Newtownanner Stud Irish EBF S. with yet another of the No Nay Never crew carrying great expectations in Marc Detampel and Michael Buckley's Caroline Street.

Already successful over this mile trip at Leopardstown July 14, the Joseph O'Brien trainee had Ballydoyle's Library (Ire) (Galileo {Ire}) well-beaten in third and that peer boosted the form by winning impressively at Tipperary on Friday evening. Also in the mix for this race known as the Flame of Tara which was won last year by the eventual Irish Oaks heroine Magical Lagoon (Ire) (Galileo {Ire}) is the Rosegreen representative Maybe Just Maybe (Jpn) (Lord Kanaloa {Jpn}), who also beat Library at Leopardstown Aug. 11 and who is back just a week after finishing fourth to Meditate (Ire) (No Nay Never) in the G2 Debutante S. here.

In the proceeding G3 Heider Family Stables Round Tower S., another Aidan O'Brien-trained filly backs up quickly in Sunday's Naas maiden winner Dower House (Ire) (Galileo {Ire}), with the full-sister to Churchill (Ire) and Clemmie (Ire) up against Juddmonte's 'Rising Star' Apricot Twist (Ire) (Expert Eye {GB}) who has to prove her disappointing effort in Naas's Irish EBF Ballyhane S. at the start of the month all wrong.

Small field sizes are firmly established at every level in Britain now and Goodwood's other two black-type races, the G2 William Hill Celebration Mile and G3 William Hill March S., have attracted a disappointing nine runners between them and not much in the way of excitement. Best of them is the Derby runner-up Hoo Ya Mal (GB) (Territories {Ire}), who looks to book his St Leger ticket in the March, while the Celebration Mile, which can be a stallion-maker, has only one who can fit that bill in Shadwell's nearly-horse Mutasaabeq (GB) (Invincible Spirit {Ire}). It is a measure of the renewal's quality that the son of Ghanaati (Giant's Causeway) may not even have to improve on his narrow defeat by Chindit (Ire) (Wootton Bassett {GB}) in Ascot's G2 Summer Mile to take this race which badly needs another Poet's Voice (GB) or Raven's Pass but isn't going to get one this year.