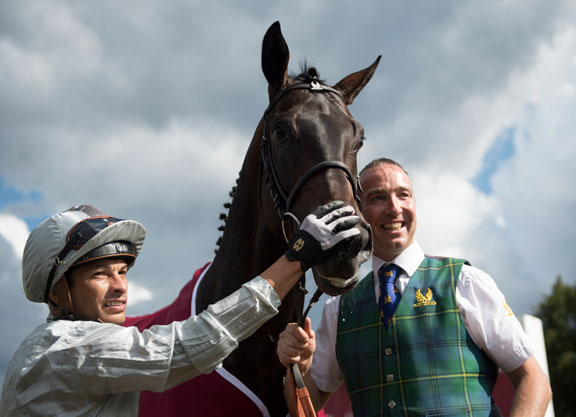 G3 Matchbook Brigadier Gerard S. on Thursday, with Sheikh Hamdan bin Mohammed Al Maktoum’s Matterhorn (Ire) (Raven’s Pass) looking to confirm his aptitude for grass after a fine second in the May 10 G2 Huxley S. Soft ground at Chester took the shine off the impressive Apr. 19 Easter Classic winner on his switch from the all-weather on which he has thrived and connections will get a much truer gauge as to his level on this surface after this test.

“You would expect the testing conditions at Chester not to play to his strengths, so back on a quicker surface will be a help,” trainer Mark Johnston’s son and assistant Charlie said. “I know we are biased, but we felt if you ran the race again at Chester things would have panned out differently and he quite possibly could have won. He was just in the wrong place as the race was developing. Forest Ranger got first run on him and he was making ground all the way to the line. It was a good run and a nice run, in that it confirmed the horse is a group-class horse on turf as well as on the all-weather.”

“He will be racing for new connections–it’s very exciting,” his trainer said. “The horse is in very good form and I thought he did something very special at Maisons-Laffitte. He won his race over about 50 yards and I know Mr Fabre really fancied the second, so that looked a very good race. We’ve always thought a lot of this horse and he has been training well since.”

The card’s G3 Matchbook VIP Henry II S. for the stayers features another Hamdan bin Mohammed-Mark Johnston project in Dee Ex Bee (GB) (Farhh {GB}) who proved so dynamic in the G3 Sagaro S. at Ascot last time on May 1. Last year’s G1 Epsom Derby runner-up has a penalty as he is joined by the stable’s Chester Cup hero Making Miracles (Pivotal {GB}), but if he is to challenge Stradivarius (Ire) (Sea the Stars {Ire}) in the June 20 G1 Gold Cup he will need to defy it with comfort.

“We were very pleased with him at Ascot and there was a case for going straight to the Gold Cup on the back of that,” Charlie Johnston commented. “He’s a horse that took his racing well last year and we felt going the best part of seven weeks between the Sagaro and the Gold Cup wouldn’t be an ideal preparation and another race would benefit him. All of dad’s three Gold Cup winners ran in this race on the way there. That was probably a determining factor in the back of his mind.”

‘TDN Rising Star’ Sangarius (GB) (Kingman {GB}) reappears in the Listed Matchbook Low Commission Exchange Heron S. with expectations high that he can make a splash this term. Having beaten the subsequent G3 Sandown Classic Trial winner Bangkok (Ire) (Australia {GB}) on debut at Newmarket in August, Juddmonte’s grandson of Banks Hill (GB) (Danehill) took the Listed Flying Scotsman S. at Doncaster in September before running fourth in the G1 Dewhurst S. on the Rowley Mile back in Newmarket in October. Stacked full of promise as usual, this “prep” for the G1 St James’s Palace S. also features another ‘TDN Rising Star’ in Lady Bamford’s King of Comedy (Ire) (Kingman {GB}), who scored on his 3-year-old bow at Yarmouth Apr. 23.

Andrew Balding’s Kingsclere establishment could not be in better form and they are represented by another son of Kingman in Fitri Hay’s surprise seven-furlong Newmarket novice debut scorer Bell Rock (GB). “We are really looking forward to this horse coming back,” Balding said. “He is a horse that I think is still very smart. He did have a setback and had to miss a chunk of work. We have to start him off somewhere and this will give us an idea of where we can go with him in the future. His work has been to a good level and the mile should be no problem for him.”

Two-year-olds get the chance to shine in the Listed Matchbook Betting Podcast National S., where Kingman is again making his considerable presence felt via his son Full Authority (Ire), who spreadeagled his peers at Chester May 9. Sheikh Abdullah Almalek Alsabah’s sharp bay meets another Mark Johnston rival in Jm Jackson (Ire) (No Nay Never) who was runner-up to the subsequent Ascot scorer Ventura Rebel (Ire) (Pastoral Pursuits {GB}) in a Thirsk maiden Apr. 13.

“She’s always been a filly we’ve held in high regard and at the time we left Thirsk quite disappointed she hadn’t made a winning debut,” Charlie Johnston explained. “But obviously the subsequent form of the winner means there are plenty of positives to take out of that. The draw [in seven] is not ideal on the straight course at Sandown.”

Earlier in the day, Goodwood starts its old Derby and Oaks trial meeting which used to have late preps for those Classics in the Lupe and Predominate but which is now more a pointer to Royal Ascot. The Listed Height of Fashion S., which has taken over from the Lupe, sees the Duke of Devonshire and Duke of Roxburghe’s Shambolic (GB) (Shamardal) provide a clue as to the merit of Shadwell’s Maqsad (Fr) (Siyouni {Fr}), who beat her five lengths in the Listed Pretty Polly S. at Newmarket May 5. Trainer John Gosden also saddles 5 Hertford Street Racing Club’s Muchly (GB) (Iffraaj {GB}), who beat the subsequent Listed Newbury Fillies’ Trial S. scorer Queen Power (Ire) (Shamardal) in a mile conditions race at Ascot May 1.

“Frankie Dettori rode a marvellous race at Ascot and it was the plan to go for this race, to step her up in trip and see where we are at,” the syndicate’s racing manager Harry Herbert said of the latter. “Goodwood is very different to Ascot, but hopefully she will be fine. She has always been held in some regard by John and it will be very interesting to see if the step up in trip takes her to the next level.”

Kirsten Rausing’s May 3 10-furlong Chepstow novice winner Aloe Vera (GB) (Invincible Spirit {Ire}) takes aim in the Height of Fashion from the Ralph Beckett yard and she hails from the same remarkable family of the owner-breeder’s top-class acts of recent years. “I’m not going to say she surprised us winning first time out at Chepstow, but she surprised us in the manner she did it, having to come from so far back, as it was not really the plan to be that far back,” her trainer said. “This is a big step up, but she has worked well since Chepstow and I think she is worth rolling the dice with in a race like this. She was just very immature last year and she had a few issues and I was not able to train her in quite the manner I would have liked to. Her sister Alyssa (GB) (Sir Percy {GB}) took time to get there, but she ended up winning a Park Hill for us.”