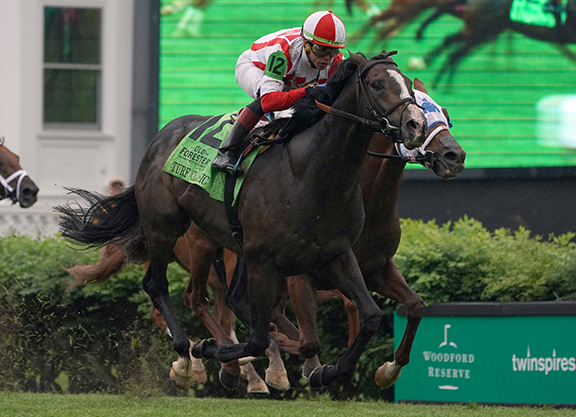 Bricks and Mortar makes it four wins in a row since returning from a 14-month layoff in December with a late-flying victory in the GI Old Forester Turf Classic S. beneath the Twin Spires Saturday. Running off the hedge, the even-money favorite was back off the pace as Markitoff (Giant's Causeway) clocked an opening quarter in :24.33 and a half in :50.10. Five wide turning for home, Bricks and Mortar began a steady advance in the lane and kicked it into high gear late to deny Qurbaan at the wire. Clyde's Image held on for third. It was third win of the day for jockey Irad Ortiz, who also piloted GII Churchill Downs Distaff Turf Mile winner Beau Recall (Ire) (Sir Prancealot {Ire}) and GII American Turf S. victor Digital Age (Ire) (Invincible Spirit {Ire}), who also sported the Klaravich colors for trainer Chad Brown.

Opening his account with four straight wins in 2017, including the GII Hall of Fame S. at Saratoga, Bricks and Mortar tasted defeat for the first time at the hooves of eventual Grade I winner Voodoo Song (English Channel) in that venue's 2017 GIII Saranac S. Third behind another future top-level scorer in Yoshida (Heart's Cry {Jpn}) in that term's GIII Hill Prince S., the dark bay was subsequently sidelined for 14 months and returned a winner in a one-mile optional claimer at Gulfstream Dec. 22. Brown was confident enough in his charge to take him to the nation's richest turf race off that comeback and he proved his trainer right with a 2 1/2-length score in the GI Pegasus World Cup Invitational Turf S. in Hallandale Jan. 26 over a yielding course. Bricks and Mortar bested the re-opposing Markitoff and Synchrony (Tapit) by a nose last time in the GII Mervin Muniz Memorial H. at the Fair Grounds Mar. 23.

Bricks and Mortar is out of French stakes winner Beyond the Waves, who is graded/group stakes-placed in both France and America. She also produced MSW Beyond Smart (Smart Strike), GSW Emerald Beech (Maria's Mon), GSP Sir Ector (Dynaformer) and SP Water View (Petionville). Beyond the Waves is a half-sister to the dam of GISW Bordonaro (Memo {Chi}) and MSW & GISP Miss Empire (Empire Maker). The 22-year-old mare has a 3-year-old filly named Davida (Animal Kingdom) and failed to get in foal to Quality Road for both 2017 and 2018, but produced a Runhappy colt Apr. 24 of this year.