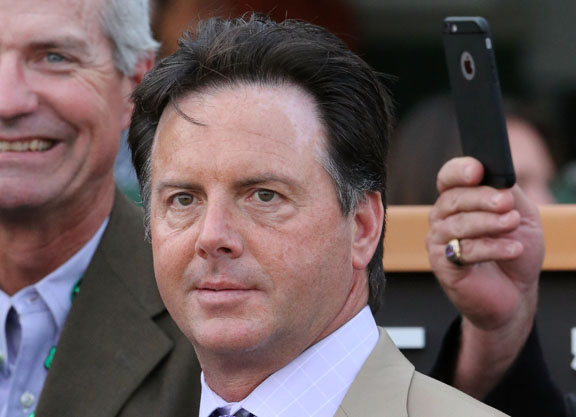 On the heels of a breakout performance from his juvenile filly Hidden Connection (Connect) in Saturday's GIII Pocahontas S. at Churchill, trainer Bret Calhoun joined the TDN Writers' Room presented by Keeneland Wednesday morning to talk about his new barn star, upcoming career milestones, the closure of his old home track Arlington Park this weekend and more.

Calling in via Zoom as the Green Group Guest of the Week, Calhoun was asked about how Hidden Connection's 9 1/4-length tour de force beneath the Twin Spires compared to his expectations for the filly.

“Trainers have got a million excuses, we're always nervous. We don't have quite what we want. Nothing rarely goes perfect,” Calhoun said. “But this filly showed a lot of talent early on. She breaks her maiden impressively, very easily. But we've got basically 30 days from a 5 1/2[-furlong] maiden race at Colonial to come to the Pocahontas at a mile and a 16th. So there wasn't a lot of time to prepare like I wanted. She always looked like she wanted to go two turns in the morning, but until you do it, it's a

lot to ask. With that being said, I did have a lot of confidence in her going in and I really felt like she would run really, really well that night. I thought she would get a good position on the first turn,and we really thought she wanted to go on. But like I said, until they prove it, you're not for sure.”

Calhoun has accomplished a lot since taking out his trainer's license in 1994, and currently has 3,308 wins to go along with over $92 million in earnings. He expressed gratitude and said he's far from done when asked to reflect on those numbers.

“It's been an unbelievable run. I'm hoping to reach 4,000 wins and $100 million in earnings. I love the sport. I love the horses. And it's provided a good living for me. I can't say enough about the business and what it's done for me. A lot of people have to go to job every day that they can't stand. I go to a job every day that I love.”

Elsewhere on the show, which is also sponsored by Spendthrift Farm, West Point Thoroughbreds and Legacy Bloodstock, the writers returned to the studio to discuss trainer Charlie Appleby's dominance in America, Tomas Mejia's 10-year suspension for using a buzzer, Bob Baffert's scratch of Medina Spirit (Protonico) from the GI Pennsylvania Derby and more. Click here to watch the podcast; click here for the audio-only version or find it on Apple Podcasts or Spotify.