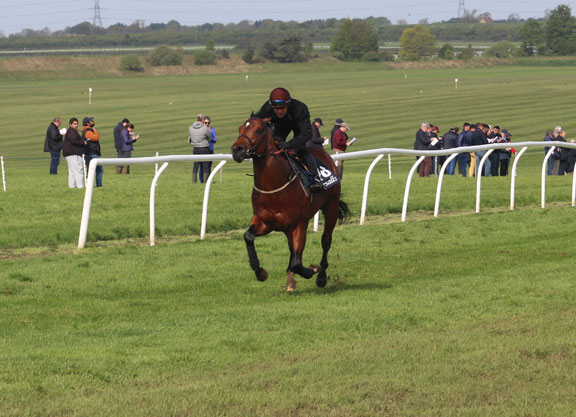 The European breeze-up calendar rolls into its second half on Friday with the single-session Tattersalls Guineas Breeze Up & Horses In Training Sale, and while the market at the first four sales of this sector staged this season has been undoubtedly selective, buyers can perhaps take heart in the fact that quality continues to emanate from this sale, its flagbearer last year being Daban (Ire) (Acclamation {GB}), sold here two years ago by Derryconnor Stud to Blandford Bloodstock for 260,000gns. The top filly of that sale proceeded to win the G3 Nell Gwyn S. and to make the frame, this weekend a year ago, in the Qipco 1,000 Guineas.

The clearance rate at this season's earlier sales has been the main figure to suffer, and so the question, today, is whether another expanded catalogue-up to 234 lots, before withdrawals, from 214 last year and just 172 in 2016-will be able to buck the trends. It would do well to match last year's sale, which rode the Doncaster-Craven wave for an excellent clearance of 86% (154 sold of 179 offered) at a median of 25,000gns. The two previous years, moreover, also managed to outstrip the sector's performance to that point, the clearance holding steady at just over 78% (at medians of 20,000gns and 23,500gns respectively).

Growing catalogues across the sector are one point of blame for market polarization and to a degree, as such, the breeze-up sector has been a victim of its own success. Indeed, a total of 627 2-year-olds were catalogued for the first four European sales: Ascot, Doncaster, the Craven and La Teste. (There are another 650 to follow at Goresbridge, Arqana and in the Guineas Sale today.) Last year, the same four sales had listed 489 lots. Withdrawals sieved these aggregates down to 523 and 404 respectively, meaning that the number of lots to have entered the ring this time round has soared by 29%. Little wonder, then, if the clearance rate has suffered-even if taken at face value. The 337 lots sold to date represent 64.4% of those offered, compared with 301 sold at 74.5% last year.

But a year-on-year comparison is two-dimensional at best. Both the Tattersalls Craven Sale and the Goffs UK Sale proved exceptionally strong in 2017, posting records in turnover, average and median. That doubtless stimulated the numbers eager to take a chance with unsold yearlings.

Norman Williamson of Oak Tree Farm said he predicts the tough going in 2-year-old market will trickle down to the yearling sales later this year.

“There doesn't seem to be a middle market,” he said. “It's probably easier to get big money for a horse than it is to just sell him. The breeze-up people and pinhookers are a huge help to the yearling market. Forget about what they buy, look at their underbidding too. They hold up the middle market. So the way this is going, I'd be slightly worried if I were selling yearlings. I know it'll sort itself out but a lot of these guys won't be able to plough back in.”

Con Marnane, who has sold 96 black-type winners through Bansha House Stud, isn't afraid to take a 2-year-old home if it doesn't meet its value in the sales ring-in fact, I'm The Man (Ire) (Dandy Man {Ire}), who failed to illicit a bid at Doncaster, won first out at Chantilly on Wednesday in the colours of Marnane's wife Theresa. Marnane echoed Williamson's sentiments regarding the yearling sales.

“The breeze-up guys spent £25 million on yearlings last year. That won't happen this year,” he said. “It's a complete buyers' market out there.”