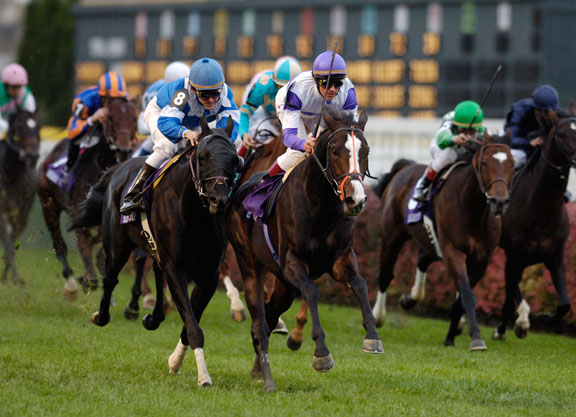 Red Rocks (Ire) (Galileo {Ire}-Pharmacist {Ire}, by Machiavellian), one of four Group 1 winners from his sire's first crop and the first of Galileo's four winners of the GI Breeders' Cup Turf, died in September at Calumet Farm in Kentucky, Racing Post reports.

Winner of the 2006 Listed Fairway S. at three for owner Paul Reddam, Red Rocks was then runner-up consecutively in the G2 King Edward VII S. at Royal Ascot, the G1 Grand Prix de Paris and the G2 Great Voltigeur S. before finishing third behind fellow first-crop Galileo colts Sixties Icon (GB) and The Last Drop (Ire) in the G1 St Leger. He gave trainer Brian Meehan his first Breeders' Cup win next out in the GI Turf. Red Rocks finished third behind English Channel in the same race the following year before going on to beat Curlin and Better Talk Now in the GI Man O'War S. in 2008. Red Rocks started out at stud in Italy at Centro Equino Arcadia in 2010, and after five years crossed the Atlantic to stand at Calumet. A five-year stint there was broken by one more year back in Italy in 2017. He has thus far sired three stakes winners from seven crops of racing age.