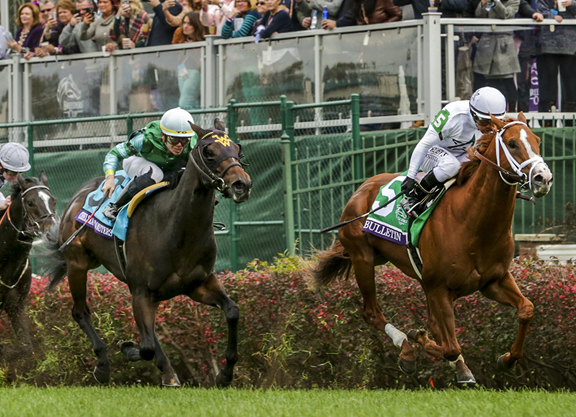 Bulletin (City Zip), who took the inaugural running of the Breeders' Cup Juvenile Turf Sprint at Churchill Downs in 2018, makes his Australian debut for trainers Gai Waterhouse and Adrian Bott in Saturday's A$125,000 Sky Racing Active H. over 1100 meters at Rosehill Gardens in Sydney. He was scratched from a similar spot last weekend at Randwick.

Bred in Kentucky by CresRan and sold for $250,000 as a Keeneland September yearling, Bulletin first raced for the partnership of WinStar Farm, China Horse Club and SF Racing and was trained by Todd Pletcher to a debut victory in the Hollywood Beach S. ahead of a 2 3/4-length tally in the Juvenile Turf Sprint, contested in testing underfoot conditions. Winner of the Palisades Turf Sprint in five starts at three, Bulletin made a pair of starts under the care of Steve Asmussen last season, including a runner-up effort in a turf sprint allowance at Churchill when last seen in June.

Now racing for a conglomerate headed up by Australia's Newgate Stud Farm and China Horse Club, the son of GSW Sue's Good News (Woodman) will break from gate four in a field of seven. Newgate also campaigned multiple Group 1 winner Con Te Partiro with Waterhouse and Bott, and the horsewoman is expecting a positive result.

“Like a lot of horses I have got from overseas, it has taken a little time for him to acclimatise, but he will give a great show on Saturday. Small fish are sweet to start with,” Waterhouse recently told the Sydney Morning Herald. “He is more like a gelding, he has a lovely attitude. He is a very kind sort of horse, a very nice horse.”

“He is worth a go down here,” Newgate's Henry Field told the Morning Herald. “We were involved with him as a very good 2-year-old on turf in the States, but most of their big races over there are on dirt and he just didn't handle it. After Con Te Partiro, we know if you find the right horse for Gai and her team, it can work. He is a Breeders' Cup winner and is still an entire, so if he can work on the track he would have a future as a stallion.”