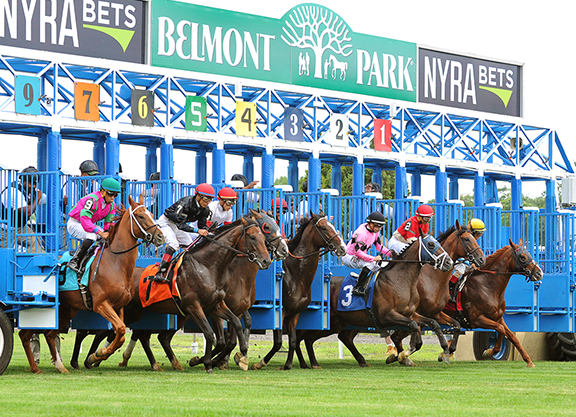 The New York Racing Association's autumn schedule will feature six Breeders' Cup “Win and You're In” qualifying races held over two weekends at Belmont Park, as well as the GI Cigar Mile H. at Aqueduct Dec. 2, it was announced Thursday. The Belmont Fall Championship season will feature a total of 42 stakes worth more than $10.1 million during the meet, which runs from Sept. 8 through Oct. 29.

A pair of “Win and You're In” races will anchor the stakes-filled Sept. 30 card in the GI Joe Hirsch Turf Classic and the GI Vosburgh S. The following weekend, the Oct. 7 GI Jockey Club Gold Cup and the GI Champagne S. and the Oct. 8 GI Flower Bowl S. and GI Frizette S. round out the Breeders' Cup qualifying events.

Racing shifts to Aqueduct Nov. 3 for their fall meet, which is anchored by the Cigar Mile on a card that features three other graded stakes. Typically contested on the Saturday following Thanksgiving, the Cigar Mile will be run one weekend later–presumably allowing it to attract more horses who have competed in the Breeders' Cup in the first weekend in November. Also added to Aqueduct's fall schedule are a pair of $125,000 stakes events at six furlongs on the turf–a course and distance that has not been used in previous years.