Home » Archive » Shared News » 'Brandi' Has It All

'Brandi' Has It All 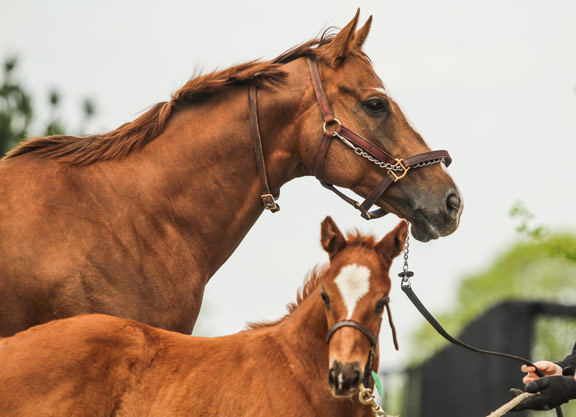 LEXINGTON, K.Y.–Take Charge Brandi (Giant's Causeway) has all the qualities a breeder could ever hope for in a broodmare. The D. Wayne Lukas pupil was an Eclipse award winner, Breeders' Cup victress and earner of just under $1.7 million on the racetrack. Additionally, she was a $6-million Keeneland November Sale topper, is by a top broodmare sire in Giant's Causeway and has a pedigree most could only dream of, being out of a daughter of blue-hen Take Charge Lady.

While Take Charge Brandi's first offspring just turned two this year and has yet to hit the racetrack, she has already proven her worth in the breeding shed, producing three exceptional colts, one by Curlin and two by Tapit.

“This mare, you know, she was a tough racemare as well,” said Hill 'n' Dale Farm manager John Rasmussen, standing beside the paddock that housed the chestnut mare and colt. “She has done everything right as far as being a broodmare here. The third foal is a really strong, powerful horse we have here. The first foal was a good Curlin and he sold well, but this foal here and the one she had last year, they seem to have a lot more leg and a lot more scope. We are really pleased.”

“We're, I wouldn't say complaining, because we've had great foals out of the mare, but we've had three colts in a row, so let's hope that we have a filly,” said Hill 'n' Dale President John Sikura. “She is in foal to Justify, so that is a great bit of news.”

“It is a fantastic pedigree, adding even more currency with Omaha Beach being one of the leading 3-year-olds this year,” Sikura said. “I think Charming is probably the early favorite for broodmare of the year this year with a champion and a Grade I winner. Her dam, Take Charge Lady, was a broodmare of the year, so that is about as good of a bloodline as you can find in North America, extremely influential. She produces sires. It has been a great family.”

Take Charge Brandi looks to continue that family legacy with her colts. Her aforementioned juvenile, named Take Charge Curlin (Curlin), summoned $850,000 from John Oxley at last term's Keeneland September Sale and is currently in training with two-time Classic winner Mark Casse. Sikura said both the 2018 and 2019 Tapit colts would be sold as well.

“He will be sold, this Tapit colt as well as her yearling, but we're undecided how and when we will sell the horse,” Sikura said. “As we evolve and develop in our business, some opportunities to retain interest in a colt of syndicate colt are things we are open to. Stallion prospects are very expensive, very illusive and hard to get your hands on. A big part of our business if certainly standing stallions, so if they could be created from within and you're involved from the beginning, that is a good opportunity as well.”

Rasmussen has raised all three colts and said he sees some similarities between them.

“They tend to look a bit like her and they have the fire in the belly, just like she did when she was a racehorse,” said Rasmussen. “They are very athletic-looking horses. They are strong and powerful and they have the drive to go places and be competitive. I think those are traits that you have to have to have a successful racehorse.”