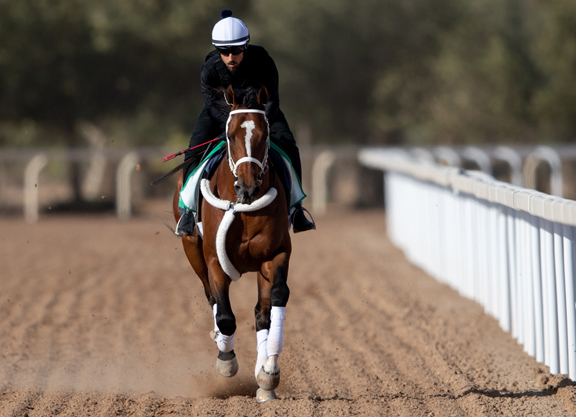 Owner Gary West released a report Saturday from Dr. Larry Bramlage, whom he commissioned to examine Maximum Security (New Year's Day) “from hoof to tail.” Bramlage did not find any major problems with the horse but did recommend that he be given a break from training to overcome some problems he was having with minor bruising and inflammation in all four limbs.

West called on Bramlage to examine last year's 3-year-old male champion after his trainer, Jason Servis, was among 27 individuals indicted after an FBI investigation into horse doping. Bramlage's findings indicate that if in fact Maximum Security had been doped during his career the drugs did not have a lasting negative impact on him from a physical standpoint.

Bramlage's report did not delve into whether or not he had ever raced on performance-enhancing drugs. Servis was accused of using the illegal drug SGF-1000 on not only Maximum Security, but on virtually every horse in his stable. In a group email to those he sent Bramlage's report to, West touched on what steps were being taken to try to determine whether or not Maximum Security had received any illegal drugs in his races.

“Since Maximum Security raced in several jurisdictions, it was requested that the laboratory responsible for testing samples in each jurisdiction conduct the blood testing to determine the presence of any prohibited medications to include SGF-1000 during any of Maximum Security's previous races,” he wrote. “Additionally, all other horses previously in the care of Jason Servis either have already had samples drawn in the jurisdictions where they are located or will be tested by the Kentucky State veterinarian on Monday and all official results will be released when they are available.”

Considering that U.S. labs have not been able to test for SGF-1000, it is unlikely that any further tests on Maximum Security will reveal anything.

Bramlage's examination found that “both hocks and both stifles show minor bruising on the distal cannon bones of all four limbs,” but concluded “all of the other radiographs are normal.”

In a section of his report labeled prognosis, Bramlage wrote, “I can find nothing seriously wrong with him.

“The planned break from continuous training is a good plan to let him reverse the accumulating inflammation before he trains on,” he added.

Maximum Security has been turned over to trainer Bob Baffert.