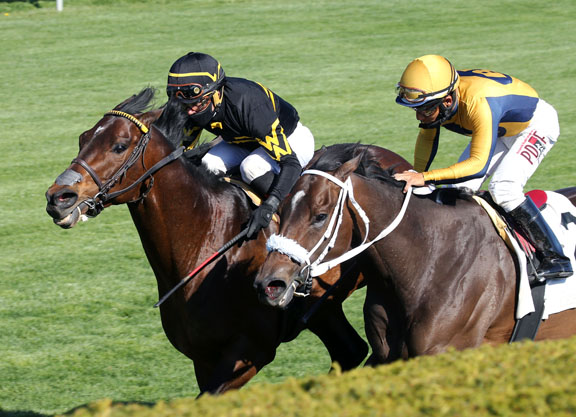 Hard-knocking turf sprint specialist Bound For Nowhere (The Factor) seeks Grade I glory Saturday in the GI Jackpot Jaipur S. at Belmont, a “Win and You're In” for the GI Breeders' Cup Turf Sprint S. Missing by a head in the GIII San Simeon S. at Santa Anita in March of 2020, the 7-year-old was a close third after leading the way in Keeneland's GII Shakertown S. that July. Benched following that effort, the bay resurfaced in the Shakertown, which returned to its usual spot on the calendar in early April.

“He's had a lot of minor issues along the way that's taken a lot of time to get to the races, which is why he's only had 15 total starts in his career, but this year he really turned the corner,” said conditioner Wesley Ward. “Each and every work is better than I've ever seen. He's always been the type of horse that wouldn't put much effort into his works. He's not letting anyone outwork him when he's in company. His times are significantly better than in the past. As you go into these big races, you're always dealing with issues. This time we're dealing with zero issues.”

Got Stormy (Get Stormy) has defeated males before and she takes them on again in this spot. Winner of the 2019 GI Fourstardave H., the chestnut was second in last year's renewal before winning the GIII Kentucky Downs Ladies Sprint S. in September and the GIII Buffalo Trace Franklin County S. in October. Off the board in the GI Breeders' Cup Turf Sprint S. Nov. 7 at Keeneland, the 6-year-old opened 2021 with a win in the GIII Honey Fox S. Feb. 27 and was fifth last time in the GII Churchill Distaff Turf Mile S. May 1.

“She likes to have a target,” said trainer Mark Casse. “A lot of times in these mile races, the pace isn't fast enough for her to have a target and we're hoping that won't be the case going three quarters.”

Fast Boat (City Zip) looks to make it three in a row Saturday as he takes on Grade I company for the first time. Capturing the Pulse Power Turf Sprint S. at Sam Houston Jan. 31, the gelding rallied to victory in the GII Twin Spires Turf Sprint S. Apr. 30.

This story was posted in Shared News and tagged Belmont, Bound For Nowhere, Fast Boat, Got Stormy, Jaipur Stakes.