Boughey Full Steam Ahead For Ascot 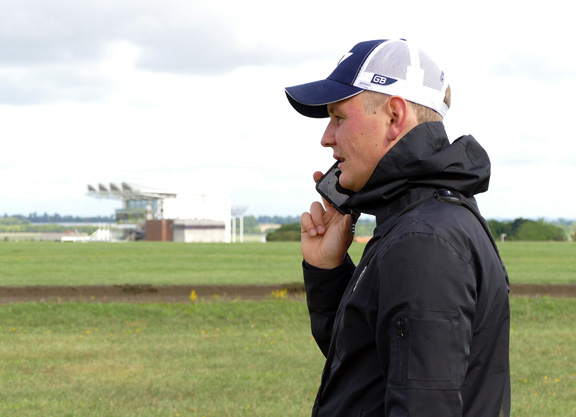 It is hard to ignore George Boughey at the moment. In only his second full season with a training licence, the 29-year-old is seventh in the British trainers' list by number of winners on 44 for the season. Most impressive of all is his strike-rate of 28%. Of trainers to have had more than 100 runners, only Charlie Appleby ranks higher on 30%, for his 36 winners.

But Boughey's most pleasing moment of the season so far came not from a winner but through the superbly gritty run of his stable star, Mystery Angel (Ire) (Kodi Bear {Ire}), who was second in the Cazoo Oaks having made most of the running. If the trainer and the owners in the Nick Bradley Racing syndicate were already on a high from the victory of Oscula (Ire) (Galileo Gold {Ire}) in the Woodcote S., the opening race of the Epsom meeting, then they were positively floating by the time Mystery Angel crossed the line in the Oaks.

“It was a great day and she has come out of the race incredibly well. She hasn't been ridden yet [since Epsom] as we haven't really got any immediate plans for her so she is just having an easy time, but she is sound and she's eating well,” reports Boughey of the filly who won the listed Pretty Polly S. on the Rowley Mile, just across from where she is trained, before running fourth in the G3 Musidora S. Prior to that, however, she had been well seasoned.

Mystery Angel graduated from the Craven Breeze-up Sale for what now looks like a bargain price of 22,000gns–almost exactly the amount it cost to supplement her for the Oaks. She ran six times as a 2-year-old, her two victories backed up by three important pieces of black type. The hunt for a stakes win continued through March of this year, when Mystery Angel made two trips to France and finished second in the listed Prix Rose de Mai.

The trainer continues, “She's maturing into the filly that I hoped she'd be. She was a very late withdrawal from the mares' sale last year and a lot of people were wondering why as she isn't really bred to do what she's doing, but she is doing it. There are some nice decisions to make.”

The diminutive daughter of Kodi Bear may not look like an obvious middle-distance type, either physically or on paper, but she apparently has both the heart and mind for the job.

Boughey says, “She's very tough. I was outlining to anyone I spoke to before the Oaks that the thing about her is she has such a good mind. I know it still wasn't really busy at Epsom but she walked into the paddock for the Oaks and it was certainly the biggest day that she has ever seen and she was so relaxed. She lobbed to post and she settled in the race. The plan was to go forward and Ben [Curtis] and I were very confident that she would stay. I know it does't look it to the eye but Nick Bradley sent me the sectionals and she ran the quickest final furlong. Okay, so Frankie [Dettori] was easing up late on on the winner, but she stays a mile and a half well seemingly, and what a fun filly we've got.”

Mystery Angel is by no means the only fun filly in Boughey's Saffron House Stables. He has been winning 2-year-old races at a phenomenal rate this season, and the Woodcote winner Oscula is one who will form part of a formidable juvenile team for next week's Royal Meeting, along with recent impressive Newmarket winner Cachet (Ire) (Aclaim {Ire}) for Highclere Thoroughbred Racing, and dual novice winner Beautiful Sunshine (GB) (Ardad {Ire}). The latter is one of a number of smart juveniles the trainer has for Kia Joorabchian's Amo Racing, many of whose horses receive their early grounding in Ireland by crack breeze-up consignor Robson Aguiar.

Superior Force (GB) (Ardad {Ire}) is another in that category and could be one of the colts to be Ascot-bound, along with fellow Amo colour-bearer Thunder Love (GB) (Profitable {Ire}) and the treble winner and listed-placed Navello (Ire) (Ivawood {GB}), who races for Fiona Carmichael and Evelyn Yates.

“I'd be lying if I said I wasn't pinching myself,” says Boughey of his season to date. “It's extraordinary what's going on at the moment. We had a team of horses and you kind of evaluate them in late February when the 2-year-olds start doing a bit more. It was a direct ploy from us to keep buying older horses, and we won a couple of races with unexposed 3-year-olds or 4-year-olds who could be a lot of fun. I think to train a lot of winners you need to keep buying tried horses and that's what we were initially successful with and we won't change the motive there. But, yes, to have had 14 2-year-old winners already–I think it's the most in Europe and I certainly didn't expect that.”

Oscula went straight to Epsom having won well first time out on the similar rolling downland course of Brighton, which was a deliberate test on her trainer's behalf to see if she would be up to the Woodcote challenge.

“It's not an exact science but it's a pretty similar track and to be able to go down the hill and quicken again was useful,” he says. “I didn't expect her to win so cosily but she looks like she's creeping up the ranks. She will more than likely go to the Albany now and she goes there with a single-figure price chance.”

“Beautiful Sunshine was a bit lazy on debut, and she and Superior Force are both by Ardad and they are quite similar in that they have taken a bit of racing to get them going, but Beautiful Sunshine has taken a step forward and she will go to the Queen Mary with a pretty live chance,” says Boughey. “Her work has been good and she has a great mind for it. The 2-year-olds that we are taking to Ascot this year have been pretty professional on debut. They have run professionally, and they have behaved, and I think that's a huge asset to take to Ascot. We had our first Ascot runner last year, Astimegoesby (Ire), and he was a bit of a hooligan in his race before and I slightly feared that might happen. But these ones have very straight minds on them and that's key for a big day like that.”

Navello will arrive at Ascot more seasoned than most of his contemporaries. The colt has had five runs already, starting out at Bath in early April, which turned out to be a good sighter for his subsequent hat-trick at Wolverhampton, Brighton and Chester. Most recently he was third behind the Hugo Palmer-trained Ebro River (Ire) (Galileo Gold {Ire}) in the listed National S. at Sandown.

His trainer notes, “Hugo's horse was obviously very impressive and that goes to the Coventry now so we won't have to take him on, and Navello's speed was slightly blunted by the very soft ground that was drying. I was in more of a sweat than the horse was because it was a very warm evening and it was drying out. Although he won on very soft ground at Chester, I think he kind of won by default because it was very wet ground and he got through it.

“Navello worked the other morning on quicker ground and he worked very nicely. If we do get quicker ground at Ascot we'll probably see a different horse again. I think the plan at the moment is to go for the Norfolk.”

Navello has been ridden in all his starts by Nicola Currie, who has been determinedly clawing her way back into the limelight after injury derailed her season last year. She has formed a fruitful partnership with Boughey, who also regularly uses apprentice Mark Crehan and the currently injured Rossa Ryan.

“Nicola has been riding out a couple of times a week and driving the long hours at 4am to come and ride for us so it's nice to be able to give her a chance,” Boughey explains. “At the moment she will ride Cachet in the Albany and I would go so far as to say she'll be the top of the pile for my fillies for Ascot. She was very impressive at Newmarket on debut. I don't see why Nicola won't keep the ride–she's ridden her in all her work at home, and she will ride Cachet and Navello which are two quite nice Ascot rides for her.”

He adds, “Rossa was in on Saturday to watch work and he's trying to make it back for Ascot, but even if he doesn't he knows the nice horses are there for him to come back to.”

Ryan is the retained rider for Amo Racing, which has become an increasingly dominant force this season and is currently fifth in the owners' table behind Godolphin, Shadwell, the Coolmore partners and King Power Racing. As Nick Bradley runs his partnerships under different numbers, it is harder to quantify the operation's success in the formal table, but it has already been represented by eight winners this year, as well as two Classic-placed fillies, with the G2 Prix du Calvados winner Fev Rover (Ire) (Gutaifan {Ire}), who is trained by Richard Fahey, having finished third in the 1000 Guineas. Bradley is now a staunch supporter of the Boughey yard with 12 horses in training there.

“Nick and I speak every day and I think he said in an interview last year that he almost sees himself as an aid to his trainers,” Boughey says. “I know the programme book inside out but I speak to a lot of people about my horses and bouncing ideas off each other can only be beneficial. Nick's great. He's a very bright man and we work pretty closely. He and Amo Racing and my biggest supporters.”

While Mystery Angel will not be among the team for Royal Ascot, there are plans being formulated for her to tackle further big prizes this season, including the G1 Qatar Nassau S. at Glorious Goodwood.

Boughey says of his first Classic runner, “She's very cool and a joy to train. She gets up, eats, sleeps and trains. If we had another one or two like her life would be very easy.”