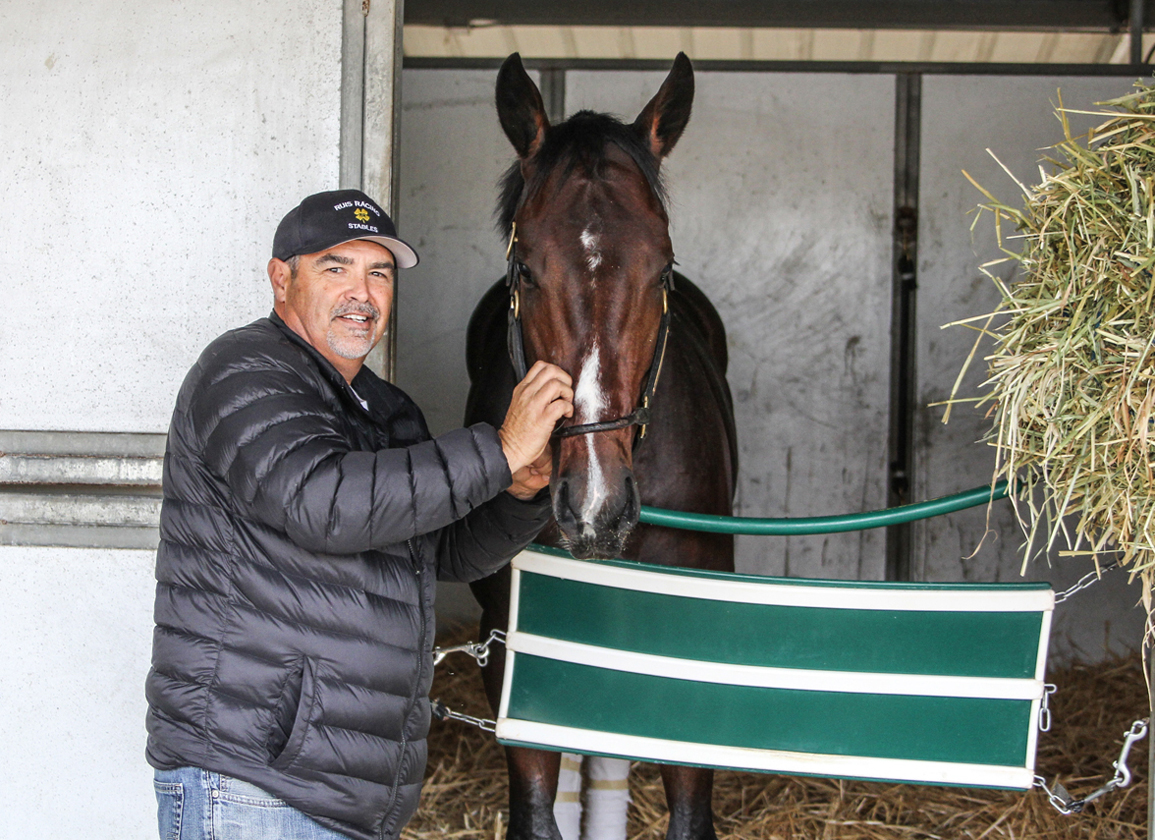 Three years ago, Mick Ruis purchased the 330-acre former Woodford Thoroughbreds outside Lexington and revamped his entire broodmare band with the sole focus on supporting his recently retired multiple Grade I winner Bolt d'Oro. With the stallion's first yearlings hitting the sales ring this summer to wide appeal, the decision is paying off in spades. Ruis was rewarded by two yearlings at the Fasig-Tipton Saratoga Sale and will offer a filly by Bolt d'Oro during the first session of the Keeneland September Yearling Sale Monday.

“I would say 100% of my decision to sell the smaller farm, Chestnut Hill in Versailles, and to get Woodford Thoroughbreds had to do with Bolt,” Ruis said. “We have six barns, 90 stalls, 330 acres, 11 miles of fences and three miles of paved roads. It was so that, when I started breeding, we could raise a good horse. I bred 20 mares to Bolt myself.”

Ruis and his wife Wendy purchased Bolt d'Oro, a son of Medaglia d'Oro out of Globe Trot (A.P. Indy), for $630,000 at the 2016 Fasig-Tipton Saratoga sale. The handsome bay opened his career with three straight wins, sweeping both the GI Del Mar Futurity and GI FrontRunner S. before finishing third in the GI Breeders' Cup Juvenile. He inherited the win via disqualification in the 2018 GII San Felipe S. and was second behind subsequent Triple Crown winner Justify in a controversial edition of the GI Santa Anita Derby.

“Everything he did was natural and I knew he was going to pass his genes on,” Ruis said of his confidence in the young stallion, who is a half-brother to Grade I winner Global Campaign (Curlin) and stakes winner and multiple graded placed Sonic Mule (Distorted Humor). “He was so wonderful with all his natural speed, and the bloodlines–by Medaglia d'Oro out of a female family that was incredible.”

Bolt d'Oro retired to Spendthrift Farm in 2019 and began his stud career at a fee of $25,000. Ruis retained a 50% interest in the stallion and began planning his new breeding program.

“I think I had five mares [before Bolt d'Oro retired],” Ruis said. “Now we have 40 broodmares. I spent over $5.5 million in two years upgrading my broodmare band. That's just for broodmares. And then I got some younger, 2 and 3-year-old fillies that I spent good money on at auction for the bloodlines when they got done racing to go to Bolt.”

Ruis plans on sending his entire foal crop through the sales ring.

“I am going to sell because I don't want people to say we only keep the good ones and sell the other ones,” he explained.

“They got a lot of looks and people loved them,” Ruis said of his Saratoga offerings. “And I thought, 'Wow, they should come see the ones that I have at the farm. I have 18 Bolts. I took two to Saratoga and I have 16 left. The people were teasing me, they were calling me Pappa Bolt. But me breeding 20 and I think there were 198 registered foals in his first crop, so it's not like I'm the only guy who bred to Bolt.”

“I spent about half an hour just looking at him and saying, 'What a gorgeous creature,'” Ruis said of the seven-figure yearling.

Of the colt's headline-garnering result, Ruis added, “It was very gratifying to know that we went in the right direction. I feel like I got the right partners when I went with Spendthrift and Mr. [B. Wayne] Hughes. Over the last four years, I had, not only a business partnership, but a friendship with Mr. Hughes and I learned a lot of business values and integrity from him. That man did things his way. I remember when I was being courted by every farm to try to buy Bolt as a stallion and someone said, 'Why are you going to Walmart?' And now I'm saying, 'Walmart is kicking everybody's butt.' I know I picked the right partners, they are like family, it's easy.”

Ruis will offer his third yearling by Bolt d'Oro when South Point Sales Agency sends a daughter of Teroda (Limehouse) (hip 194) through the ring at Keeneland Monday.

Ruis purchased Teroda, with the filly in utero, for $275,000 at the 2019 Fasig-Tipton November sale. The 13-year-old mare is the dam of multiple graded stakes winner Sombeyay (Into Mischief) and graded stakes winner Domain Expertise (Kitten's Joy). Her 4-year-old daughter Bruja Escarlata (Street Boss) opened her career with three straight wins for Hronis Racing and trainer John Sadler before suffering her first loss when sixth in the Daisycutter S. at Del Mar in July.

“That mare has two stakes winners out of three babies and John Sadler thinks Bruja Escarlata will be a stakes winner after her next race,” Ruis said. “If you look at what I paid for her, what a steal that ended up being. Sometimes you get those good stories.”

Of similarities he sees in Bolt d'Oro's first crop of yearlings, Ruis said, “He is really stamping them with that big square front end and nice-boned babies with big shoulders. I am not a professional in breeding, but everyone said, 'Wow, Bolt is just stamping his babies.' They all look alike and all look good.”

After the Bolt d'Oro hype builds through the yearling sales, Ruis said he plans on offering weanlings by the sire this fall.

“I have some drop-dead gorgeous weanlings by him,” Ruis said. “So I'll probably put a few weanlings in the [November] sale also. People can get an idea now that this is what they look like as a yearling, so when they are buying these weanlings, it isn't so much of a guessing game. I'll probably sell five or six weanlings in November.”

The Keeneland September sale begins Monday with the first of two Book 1 sessions commencing at 1 p.m. Book 2 sessions Wednesday and Thursday begin at 11 a.m. Following a dark day Friday, the auction continues through Sept. 24 with sessions beginning daily at 10 a.m.