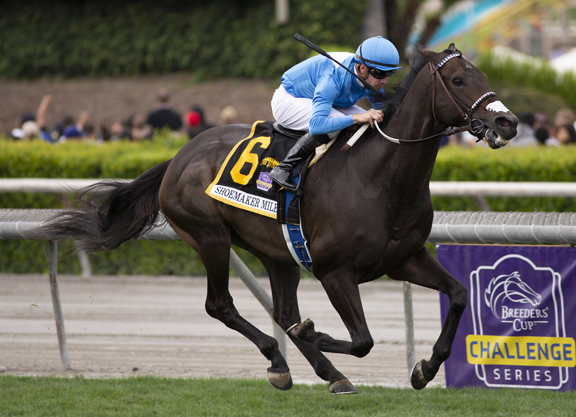 Golden Pegasus Racing's Bolo (Temple City), missing in action for nearly two years, returned to the winner's circle with a 30-1 upset victory in the GI Shoemaker Mile S. at Santa Anita Monday. The win earned the 7-year-old gelding an automatic berth to the GI Breeders' Cup Mile. Hustled out to the early lead, Bolo was in control through fractions of :23.51 and :46.95. With the field closing in, the 7-year-old was asked for more entering the stretch and he skipped away again to win with authority.

Bolo earned his way into the field for the 2015 GI Kentucky Derby with third-place efforts in the GII San Felipe S. and GI Santa Anita Derby, but switched to the turf after a 12th-place finish behind American Pharoah (Pioneerof the Nile) in Louisville. He won the first graded race of his career in the 2016 GII Arcadia S. and returned to win that race again in 2017, but went missing following a sixth-place effort in that year's GI Shoemaker Mile. He resurfaced in a nine-furlong optional claimer over the Santa Anita lawn Apr. 28 and set the pace before tiring to fifth.

Wayne Hughes purchased Bolo's dam Aspen Mountain for $210,000 as a Fasig-Tipton July yearling in 2003. She is a half-sister to the dam of GI Kentucky Derby winner Mine That Bird (Birdstone) and multiple Grade I winner Dullahan (Even the Score).