Bolger Achievement Generations In The Making 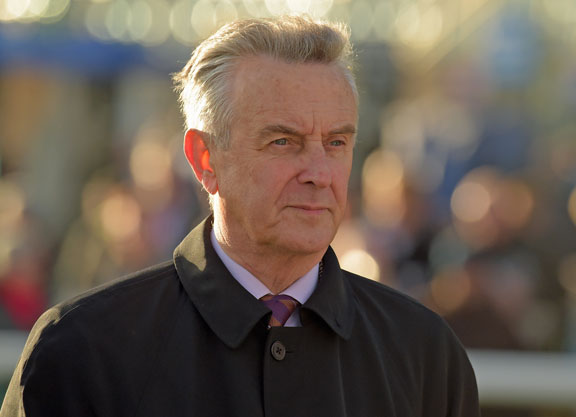 Jim Bolger bred four 2-year-old group winners within a week, and trains and owns three of them | racingfotos.com

To breed four 2-year-old stakes winners within a week would be a landmark accomplishment for anyone. For Jim Bolger, however, it merely scratches the surface of what he accomplished the past two Saturdays as a breeder, owner and trainer.

Poetic Flare (Ire) (Dawn Approach {Ire}) got things going on Oct. 17 at Leopardstown with a win in the G3 Killavullan S. Bolger bred not only Poetic Flare but his first two dams and his sire, and raced them all in the white and purple silks of his wife Jackie Bolger, with Dawn Approach having eventually been sold to race in the Godolphin blue.

G1 Vertem Futurity Trophy winner Mac Swiney (Ire) (New Approach {Ire}) was the highlight of a memorable day on Oct. 24 for the Bolger program, he being another third generation homebred trained by his breeder and by a sire trained and originally owned by Bolger. Mac Swiney, in fact, is a blend of Bolger's two most successful colts, being by New Approach (who he bought as a yearling) out of a mare by Teofilo (a second-generation homebred).

Mac Swiney's win followed five minutes on from Gear Up (Ire)'s victory in the G1 Criterium de Saint-Cloud. That Bolger-bred, who is by Teofilo, was sold as a yearling to trainer Mark Johnston for €52,000. A memorable Saturday was capped by homebred Flying Visit (Ire) (Pride Of Dubai {Aus}) winning the G3 Eyrefield S. at Leopardstown. He is out of another Bolger homebred Teofilo mare.

It is a rare feat indeed for one person to enjoy such continuous success across two professions as notoriously difficult as breeding and training racehorses, but Bolger has done just that over the past 20 years in particular. Teofilo and Soldier of Fortune (Ire) (Galileo {Ire}) were both from Galileo's second crop and raised in the same paddock at Bolger's Redmondstown Stud. G1 2000 Guineas winner Dawn Approach was from the first crop of Bolger's Derby winner New Approach and provided the trainer with his fifth Dewhurst in seven years, all homebreds aside from New Approach, while Trading Leather (Ire) was a Bolger-bred Classic winner by Teofilo. And the program at Redmondstown has turned out plenty of top-class fillies, too, like Pleascach (Ire) (Teofilo {Ire}), who won the G1 Irish 1000 Guineas in the Bolger colours and the G1 Yorkshire Oaks in the Godolphin blue.

“One of the reasons I have to breed horses is that it's the best way to get them to train, and when you get a good one you know it isn't going to be taken away from you,” Bolger explained on Monday shortly after sending out yet another 2-year-old winner, French Fusion (Ire) (Harzand {Ire}), at Galway in his wife's colours. “There's great peace of mind with owning them as well because if you do mess one up you don't have to explain it to anybody. Except my principal owner–but she's very forgiving.”

Bolger took out his trainers license in the late 1970s, and while simultaneously training a few fillies that went on to be influential broodmares for other owners-the likes of Give Thanks, Flame of Tara and Park Appeal-began building his own broodmare band. One of his early acquisitions was the Northfields mare Amoura, who went through the ring nearly unnoticed at Keeneland November in 1994 and was scooped up by Bolger for $5,000. Eleven years old at the time and in the care of Juddmonte, the unplaced Amoura had had seven foals at the time, five of racing age and one winner.

“I had a very close association with Northfields when I started out,” Bolger said. “I always liked Northfields and his broodmares. This one [Amoura] had a very good tail female line of the Aga Khan's. Even though she was older at the time I said 'sure, if I get a couple of foals out of her I might get the makings of a good broodmare.' Quest For Fame was standing out there [in Kentucky] at the time and I would have known all about him being a Derby winner. It was fortuitous for me that he was standing in America because I wasn't going to bring Amoura home.”

Mac Swiney was making his sixth start in the Vertem Futurity Trophy, having beaten the useful Ballydoyle yardstick Wembley (Ire) (Galileo {Ire}) when breaking his maiden at second asking and Jessica Harrington's Cadillac (Ire) (Lope De Vega {Ire}) in the G2 Futurity S. on Aug. 22 at The Curragh. The heavy going and mile trip at Doncaster proved no problem for the chestnut, and Bolger described him as a horse for next year.

“We always felt that he'd improve a nice bit as a 3-year-old because he'll be able to stretch out further as well,” he said. “I think he'll stay a mile and a half but we'll probably start off in one of the Guineas and go from there.”

All going well it would be no surprise to see Mac Swiney line up in a Derby alongside his former studmate Gear Up, who took his record to three from four for Mark Johnston over the heavy Saint-Cloud ground in the mile and a quarter Criterium de Saint-Cloud.

“I was thrilled for Mark Johnston because he has campaigned the horse very well and it was lovely to see him win his Group 1,” Bolger said.

As with Amoura, Gear Up's dam Gearanai was sourced from Keeneland for $40,000 as a short yearling at the January sale in 2008. She is a granddaughter of the four-time Grade I and Classic winner Dispute (Danzig), and this is a family that has been very good to Bolger in particular this year; Maoineach (Congaree), a great-granddaughter of Dispute from a different branch of the family, provided Bolger with yet another group-winning 2-year-old in August in the form of the G3 Round Tower S. scorer New Treasure (Ire) (New Approach {Ire}). Gearanai supplied the G3 Eyrefield S. winner Guaranteed (Ire) (Teofilo {Ire}) two years ago and her Teofilo yearling colt topped last month's Tattersalls Ireland September Yearling Sale when bought by the Hong Kong Jockey Club for £325,000. He was consigned by Bolger's granddaughter Clare Manning's Boherguy Stud, as was the sale's second-top lot, a New Approach colt out of Maoineach. Gearanai has a colt foal by Parish Hall (Ire), who Bolger retained after his racing career to cover some of his own mares. Parish Hall, who has his first 2-year-olds this year, won't have huge numbers to represent him, but it is worth noting what Bolger has done with Vocalised, who he liked enough to use as a private stallion. Parish Hall has 22 foals in his first crop and from three runners has had a winner and one placed.

“I held onto him and he covers some of my mares every year, and hopefully there's more to come from him,” Bolger said of Parish Hall. “They would be out of lesser mares; I sent him very ordinary mares, but some of them have shown me enough this year to indicate that they'll probably be fairly good next year.”

Flying Visit brought up the hat trick on a remarkable day for Bolger in the Eyrefield going 1800 metres at Leopardstown. Bolger bought the second dam Six Nations (Danzig), a full-sister to Chief's Crown, for €52,000 from Goffs November when she was 17, and the second mating that Bolger planned for her produced Flying Visit's dam Fionnuar (Ire) (Teofilo {Ire}). Flying Visit is the mare's fifth foal; she has produced two winners by Pour Moi (Ire) and placed fillies by Vocalised and Intense Focus.

“She was quite good, she won a few races for us and she's a great-looking mare with plenty of scope,” Bolger said of Fionnuair, adding modestly, “I'm sure she'll make a good broodmare, but I haven't done so well mating her. Hopefully I'll get it right now in the future.”

It was certainly a tip of the cap for Pride Of Dubai to be sent a mare by Bolger for his first Northern Hemisphere book, and the Coolmore sire has obliged with five first-crop stakes winners including Flying Visit. Bolger admitted that while the script has worked out well, Flying Visit was not the result he had planned for with the mating.

“I knew Pride Of Dubai was a fast horse and I was looking for some speed, but I ended up getting a middle distance horse,” Bolger explained. “I'll take what I got, but it wasn't what I intended. I probably was hoping to get a filly out of that mare with a good turn of foot that I could keep to go to stud, but anyway, it wasn't to be but the consolation is alright.”

Flying Visit was, remarkably, making his 10th start in 10 weeks in the Eyrefield. Bolger explained, “he's not the easiest horse to manage. He's ridden out every day by the one person. Because he was like that, after he ran the first time he did no more fast work at home. He does everything on the track and it's working out well for him. He'll definitely improve for next year and he'll stay well also.”

By the time an eventful Saturday had passed, the Oct. 17 G3 Killavullan S. must have seemed like a distant memory in the Bolger camp, but indeed it was Poetic Flare who kicked off the entire sequence that day at Leopardstown. Poetic Flare had been a debut winner at Naas on Mar. 23 over Ballydoyle's last-out Listed Doncaster S. winner Lipizzaner (Uncle Mo), and having not been seen in over six months, finished 10th of 14 in the G1 Dewhurst S. seven days prior to the Killavullan.

“I probably didn't manage him that well,” Bolger reflected. “He won first time out and then we got locked up with the Covid. At the same time he began to grow. He was only 15.2 when he won his maiden and he has grown 2 1/2 inches since then. So I left him alone all summer but I left him on the easy list too long. Then I had to rush him back a little bit. He needed the run in the Dewhurst so I knew he'd come on a nice bit after that. He's ready for the big time now.”

“Tom Gentry was a good friend of mine and he sent me Saviour to train,” he recalled. “I won a couple races with her but she wasn't very correct and he wasn't interested in bringing her back to breed from her, so I bought her from him.”

Saviour's first foal was the listed-winning Graduated (Ire) (Royal Academy) and her third was Elida (Ire) (Royal Academy), who would later foal Maria Lee (Ire) (Rock Of Gibraltar {Ire}), the dam of Poetic Flare and listed winner Glamorous Approach (Ire) (New Approach {Ire}). Those would all be outshone, though, by Saviour's sixth foal Speirbhean (Ire) (Danehill), who provided Bolger with the champion 2-year-old and dual Group 1 winner Teofilo, who has become so synonymous with the success of his breeder and trainer as evidenced by the past two weekends' results.

To breed and train four 2-year-old black-type winners in the space of seven days is a truly remarkable accomplishment. For that breeder and trainer to have also developed each of those four families from at least two generations back was likely unheard of before last weekend. When it comes to the development of top-class Thoroughbred families and homebred success, there are few that can claim more accolades than Jim Bolger.