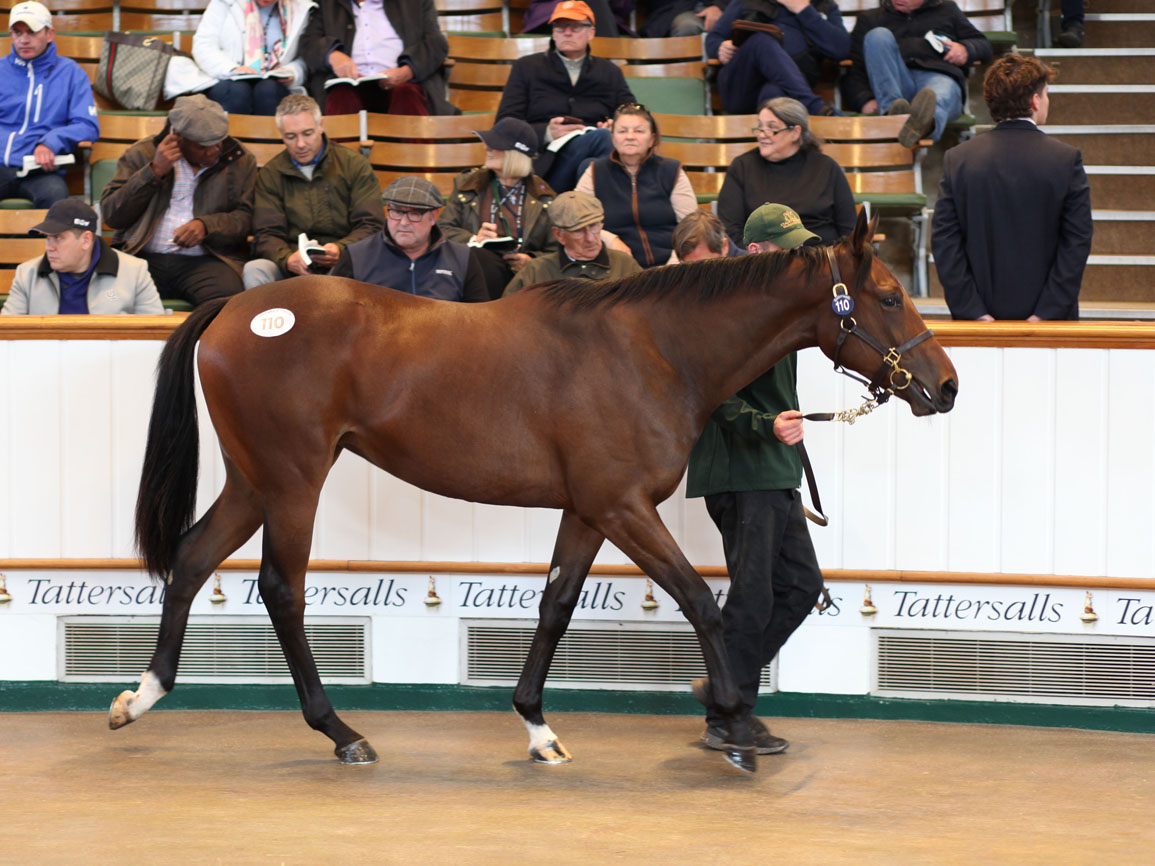 By Emma Berry and Kelsey Riley

NEWMARKET, UK–Philipp Stauffenberg is well known for being a pretty fearless pinhooker but he surpassed even his own decent results of the recent past when selling a full-sister to Arizona (Ire) (No Nay Never) to Cheveley Park Stud for 825,000gns. A further compliment to the filly's family was paid by having the team from Juddmonte as underbidders, and this type of scenario was in Stauffenberg's mind when he paid €260,000 for lot 110 at Goffs last December.

“She was a very good physical but on top of that she is an outcross for most of the big owner/breeders, and that is what we saw with Cheveley Park Stud taking on Juddmonte,” he said. “This is just one step though, the racecourse is the primary goal. It is wonderful to see Mrs Thompson investing in the future in a filly like this. She is not a horse in training, Mrs Thompson will have to wait for her until at least next year, but it is very encouraging for the industry.”

As well as having the G2 Coventry S. winner and G1 Dewhurst S. runner-up as a brother, the filly's other full-sibling is the GII Mrs Revere S. winner Nay Lady Nay, while the further family also includes Group 1 winners Dabirsim (Fr) and Sea Of Class (Ire). The filly's dam Ederle (English Channel) is herself a daughter of G1 Oaks d'Italia victrix Bright Generation (Ire) (Rainbow Quest).

Patricia Thompson, who outbid Simon Mockridge of Juddmonte, admitted that she has bought the Stephen Sullivan-bred filly as an early Christmas present to herself, but it is a gift with plenty of upside for her Newmarket stud.

“She's a lovely filly and she's a nice outcross,” said the Cheveley Park Stud owner. “She should be a very good purchase for the stud, and hopefully on the racecourse as well. We've always strived to have quality, so we're just trying to prune and buy a bit of quality. It's the only way to go.”

No Nay Never, whose leading winners this year include the classy fillies Alcohol Free (Ire) and Zain Claudette (Ire), was quickly back in the spotlight when Mick Kinane went to €475,000 for lot 114, a colt out of the G1 Premio Lydia Tesio winner Laganore (Ire) (Fastnet Rock {Aus}). Sold by The Castlebridge Consigment for breeder Newtown Anner Stud, the colt's half-brother Real Dream (Ire) (Lope De Vega {Ire}) was sold for 430,000gns at this sale last year.

A Trio For Juddmonte

In a sad year for the bloodstock industry with the loss of major owner/breeders Prince Khalid Abdullah, Sheikh Hamdan Al Maktoum and David Thompson, further encouragement can be drawn from Juddmonte's selective investment in the yearling market. Having been outbid by Patricia Thompson for the No Nay Never filly, Simon Mockridge held sway when in pursuit of the Dubawi filly out of German Group 2 winner Longina (Ger) (Monsun {Ger}). Offered as lot 127 by Newsells Park Stud, the filly from Gestut Ittlingen's top-class family of Lauro (Ger) and Lando (Ger) brought the hammer down at 800,000gns.

“The No Nay Never was a beautiful filly. We were strong on her but not strong enough, but it is nice to see Mrs Thompson here. This is also a very nice filly by Dubawi, who for us is a great outcross for stallions like Kingman and Frankel,” said Mockridge.

“The positive news is that Prince Khalid's family want to continue to develop Juddmonte and we need to buy some outcross fillies, and that is the reason why we are here. The No Nay Never and this Dubawi filly fitted the bill perfectly.”

He continued, “It has been a tough year losing Prince Khalid, but the family is committed to the future. The prince left us with a great legacy and it is there for us to drive forward. Fortunately we have a strong stallion base, we are very fortunate to have Frankel and Kingman, that is number one, it keeps us going, we just need to refresh a little bit.”

“They deserve all the credit,” said Newsells Park Stud's Julian Dollar. “We have five yearlings in the draft for Al Shahania and they arrived with us looking fantastic. They have been with us for 10 weeks and we've just put a bit of polish on them.”

In addition to the Dubawi filly, Juddmonte also bought two fillies by their freshman sire Expert Eye (GB), including lot 113, a half-sister to the Group 3 winners Brown Sugar (Ire) (Tamayuz {GB}) and Burnt Sugar (Ire) (Lope De Vega {Ire}). Bought as a foal from breeder Ballylinch Stud for €180,000 by Yeomanstown Stud, she was resold at 290,000gns.

“We bought two very nice Expert Eye fillies,” said Mockridge. “The one from Barouche Stud is a very nice filly–well made, very strong and active. And the other from Yeomanstown we were underbidders on as a foal.”

Given A Great Start

Many of the yearlings at Book 1 represent generations of careful nurturing by their breeders, and this was certainly the case for lot 49, the first foal of G1 Premio Lydia Tesio winner God Given (GB) (Nathaniel {Ire}), who won four group races for her breeder Andrew Stone of St Albans Bloodstock before returning to her birthplace of Whatton Manor Stud. Those same Nottinghamshire paddocks have also been home to her grandam, the former Irish champion 2-year-old and Group 1 winner Bianca Nera (GB), and dam Ever Rigg (GB) (Dubai Destination), whose other offspring include four-time Group 1 winner and sire Postponed (Ire) (Dubawi {Ire}).

God Given's initial mating with Lope De Vega (Ire) produced a colt who was one of the standouts of the day and will eventually race in the Godolphin blue, having been bought by Anthony Stroud at 725,000gns.

“We have always aspired to have horses nice enough to bring to Book 1,” said Ed Player of Whatton Manor Stud. “Andrew Stone has entrusted us with God Given–we had Bianca Nera here years ago so it has come full circle to get God Given back again.”

He added, “That's the highest price we've had for a yearling and we're delighted with that. He is such a good-moving horse, he walks for fun and hasn't put a foot wrong since he arrived here.”

“It's always great when a horse goes to a good trainer,” Player continued. “That's what it's all about, what they do on the racecourse, so it's very important. The colts were two very good first foals and the team at home have done such a good job preparing them for the sale.”

Ballylinch Stud's Lope De Vega is well represented in Book 1 with 44 yearlings catalogued. Fifteen sold during the first session for an average of 264,000gns and included a filly from Longview Stud, who was also bought by Godolphin for 475,000gns. Lot 64 is out of How (Ire) (Galileo {Ire}), a full-sister to a pair of Classic winners in Minding (Ire) and Empress Josephine (Ire).

MyRacehorse.com was launched into the racing elite in the U.S. when Authentic (Into Mischief) won the 2020 GI Kentucky Derby, providing the more than 5,300 investors who owned a 12.5% share in the colt the ultimate ownership experience. The microshare syndicate has since soared in popularity in the U.S.; it expanded to Australia earlier this year, and the next frontier is Europe. MyRacehorse purchased the third yearling for its European stable at Tattersalls on Tuesday, spending 450,000gns on Watership Down Stud's Dubawi (Ire) colt out of dual Group 3 winner J Wonder (Footstepsinthesand {GB}) (lot 81).

A $300,000 Keeneland November foal, J Wonder was raced by Andrew Rosen and won the G3 Fred Darling S. and G3 Oak Tree S. at three for trainer Brian Meehan before joining Shug McGaughey for a short stint in the U.S. Returning to Britain for her broodmare career, J Wonder produced for Rosen a Dubawi colt that fetched 850,000gns at this sale in 2018 and, named Boccaccio (Ire), was listed-placed for Godolphin. The mare's second foal, Gal Wonder (GB) (Galileo {Ire}), has won this year, and she had a Kingman filly in 2021 before being covered by Wootton Bassett (GB). J Wonder is a full-sister to the G1 Matron S. winner Chachamaidee (Ire), and their second dam is Legend Maker (Ire), the dam of G1 1000 Guineas victress Virginia Waters.

MyRacehorse Managing Partner Jules Pittam and Director of Operations Kate Hardy were at Park Paddocks on Tuesday, and Hardy said, “we loved this horse as soon as we saw him. He has a real presence about him. Dubawis are really classy horses and he's a nice type. He is quite strong with a nice topline and looks like he'll be sharp.”

“Dubawi is one of the best sires in the world and J Wonder has already produced a full-brother who is listed-placed,” she added. “What MyRacehorse is trying to do is provide elite bloodstock at an accessible level to our owners, so he really fit the bill.”

While plans are not yet set in stone for the bay, the MyRacehorse team is hoping he could be bound for Kingsclere.

“At this stage, Andrew Balding makes a lot of sense,” Hardy said. “That isn't confirmed but that's the direction we're looking in right now. He's going to be our first colt in training here in the UK, so we would be pretty excited to have a trainer like Andrew on board.”

MyRacehorse signed for a daughter of Zoffany (Ire) for €170,000 at Goffs Orby for its European stable who is bound for Joseph O'Brien, and a Mendelssohn filly bought at Keeneland September for $300,000 will also be crossing the Atlantic. Hardy said the first three yearlings purchased for the microshare syndicate to race in Europe will be available to investors by the end of 2021.

“By the end of the year we are hoping to launch MyRacehorse in Europe,” she said. “We will launch with the three yearlings we've purchased this year that have been chosen by our head of bloodstock and racing Roderick Wachman, so the bill is filled. The plan is to syndicate these horses on our microshare platform. We average about 1,200 owners per horse in the United States, and that's probably what we'll aim for here as well.

“We're really excited to launch here in Europe. The MyRacehorse story started in the U.S. where we had Authentic win the 2020 Kentucky Derby and Breeders' Cup Classic. We now have over 60 horses in training, and we launched in Australia in April, so Europe seemed like the next most appropriate market.”

Hardy said the deep-seated connection of Europeans with horses made it an obvious next frontier for MyRacehorse.

“It's a model that works in America so well; it's great to be able to bring people from all over such a large country in on one horse that they can cheer for together,” she said. “We really thought the European market would be a good market to come into because there is already such a huge demographic that loves racing. The horse here is such a part of the history and the culture so we felt that if we could offer a way for fans to get involved at an ownership level, it could really take off. Growing the number of people who get to experience the thrill of ownership is our main objective and we think there is quite a fan base here that would really enjoy MyRacehorse.”