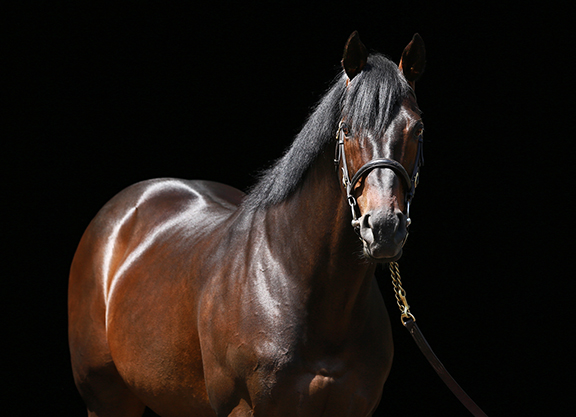 We have long appreciated the role serendipity can play in our lives and major events, so imagine our arched eyebrow reaction to a link that popped up during our research into this dispatch. Having settled on delving into the sire-line of GI Kentucky Derby and GI Preakness S. winner Justify (Scat Daddy), we took notice of very strong evidence that it is one that has held on by a thread through only two sons of its founder, Hennessy.

That's when our admitted tendency to get to the pourquoi of things brought memories of a visit to Cognac, France, where the fumes of the distillation process of the libation named after the rustic town rise above and then settle on the red clay rooftops in what the locals call “angel hair.” More lusciously, however, is that some visitors get lucky enough to sample (by sniff only) the finest blends of vintages which are labeled V.S.O.P., which stands for Very Superior Old Pale (or Very Special Old Pale). Only after resting for a minimum of 25 years are the contents of V.S.O.P. casks allowed to enter bottles.

Enter Justify in 2018, the link to his great-grandsire, Hennessy, named after a brand of cognac, who was born in 1993, which we believe was 25 years ago. That Hennessy was a somewhat plain, and not flashy, chestnut, we shall claim poet's license in judging him to have been about the right shade of that color to fill out all the requirements of that V.S.O.P. veneration.

Hennessy was a bit of a conundrum both as a racehorse and a stallion. The son of power influence Storm Cat was unbeaten in his first three starts at two, all sprints including two graded stakes, which was a bit of a surprise since his dam, Island Kitty, was by the turf router *Hawaii. His attempt at a mile in his next start, the GI Champagne S., was uninspiring for those looking for evidence of his dam's contribution.

However, in one of the more memorable GI Breeders' Cup Juvenile renewals, he hammer-and-tonged his way through the Belmont Park stretch with the larger Unbridled's Song, only to succumb at the end by a neck. That race took a toll on the $500,000 Keeneland July yearling purchase made by D. Wayne Lukas on behalf on Bob & Beverley Lewis, and his sophomore year was nothing to write home about.

Still, he entered stud at Ashford with a splendid reputation for speed, and he was, after all, a Storm Cat. Phenotypically he was a very well-balanced horse as far as power and stride factors were concerned and he had adequate weight to process the energy generated by his powerful quarters. But many observers thought he was long in the back, which depending on what you are looking for is a plus or minus in terms of extension. The reality is he had an exceptionally long ilium, the bone that runs from the back of the hip to the point where it meets the femur. This alignment is well noted for early thrusting power and he showed it as a racehorse, but it is not something which is passed on consistently.

Hennessy apparently didn't pass that factor on much, but he served breeders well with more than 60 stakes winners, including a number in Argentina where he passed away suddenly at the age of 14. What stands out most from his record is that he got only two sons who have gone on to real success at stud, and they could not be more different from each other.

For reasons implied below, we'll deal with Henny Hughes first who came along in 2003 and was a genuine high-class sprinter-miler who emulated his sire in that he also placed second in the Breeders' Cup Juvenile after leading almost all the way. He was a decent success when he first went to stud, but was sent to Japan, and then came back to North America where he sired his best runner, the multiple champion filly Beholder. He has more than 30 stakes winners to his credit, and one son in this country–Chitu, in Florida, with first foals yearlings–who looks like he is the last chance to move this branch along here because Henny Hughes is now back in Japan.

On the other hand, we have Johannesburg, a member of Hennessy's second crop, who rolled out of Europe as a Group 1-winning juvenile to shatter his rivals in the Breeders' Cup Juvenile, thereby getting revenge for his sire and Henny Hughes. A splendid individual who was very much like his sire phenotypically and in his average size and scope, Johannesburg achieved quick success at stud with current New York stallion sprinter-miler Teuflesberg (Grade II winner) in his first crop who sired GI Breeders' Cup Sprint winner Trinniberg in his first crop.

Though a success wherever he went, nothing he sired was of as high class as Scat Daddy, a foal of 2004 who entered stud just about when his sire was being exported to Japan. A larger and more powerful individual than his sire and grandsire, Scat Daddy had a “Mr. Prospector look” reflective of his broodmare sire. His racing career was excellent-he won the GII Sanford S. and GI Champagne S. before finishing fourth to Street Sense in the Breeders' Cup Juvenile after being steadied. (Ironic fact here: Each of the four stallions in this essay ran in the Breeders' Cup Juvenile at Belmont Park). He came back at three to take the GII Fountain of Youth S. and GI Florida Derby before a rough trip wiped him out in Street Sense's Kentucky Derby–after which he never raced.

From the start of his career Scat Daddy simply floored them in all kinds of races, in all kinds of places, and with all kinds of class during his career in Kentucky and Chile. In addition to Justify and his three other sons who started in the Kentucky Derby (Mendelssohn, Flameaway, Combatant), you have multiple European sprint champion Lady Aurelia, European juvenile champion No Nay Never and Chilean champion Il Campione (Chi) (now at stud in Argentina)-and more than 20 stakes winners around the world in 2017 alone.

In addition to those and others which are still racing, he has sons such as Group 1 winner Caravaggio at stud in Ireland, Graded winners Handsome Mike, Frac Daddy, and Daddy Nose Best and Tu Brutus (Chi) at stud in Kentucky. His final crop sold like they could do no wrong as yearlings last year and 2-year-olds this year, so it looks like he may be about to build a legacy of his own with only eight crops.

Like his equally short-lived grandsire, Scat Daddy has made quite an impression even though Hennessy may not get the credit he deserves for starting it all. But Hennessy's impact has been somewhat analogous to the way the cordial for which he was named came about.

Cognac was developed by happenstance and environment. The Champagne grape of the region (not the same varietal from which bubbly Champagne is made) was turned into wine and shipped to The Netherlands in the late 16th Century where the Dutch distilled it into brandy-and the French caught on.

The expansion of trade to the Far East created a demand for white wine like that of the Cognac region, but the long voyages naturally distilled the product in oak barrels and turned into something which puzzled the recipients. So, they cut it with water to make it taste like white wine. That's how it's still taken in many places in Asia, where Hennessy the stallion's two best sons now spend their lives carrying on the Very Special Order of Propagation for their old man.