Bodexpress Springs the Upset in the Clark 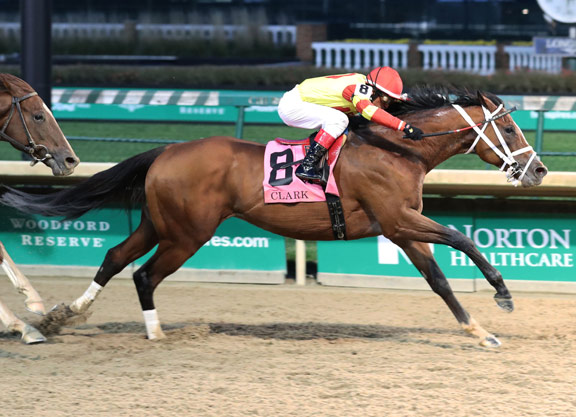 Bodexpress (Bodemeister) has had an unconventional career, running in the GI Florida Derby, GI Kentucky Derby and GI Preakness S. last year–and throwing his rider at the start of the latter–as a maiden. Placing in a trio of stakes since then, the bay finally earned his black-type badge Friday at the highest level with an 11-1 upset in Churchill's GI Clark H.

Away alertly, Bodexpress pressed from second early as 155-1 shot Phantom Currency (Goldencents) clocked opening splits of :23.39 and :47.94. Headed by Mr. Freeze (To Honor and Serve) to his inside, Bodexpress maintained his position through three-quarters in 1:12.77. Mr. Freeze took over from Phantom Currency approaching the far turn and Bodexpress ranged up on his outside with favored Code of Honor (Noble Mission {GB}) splitting horses outside of him. Coastal Defense (Curlin) joined the assault to Mr. Freeze's inside and Owendale (Into Mischief) rallied outside of Code of Honor, but Bodexpress was going strongest of all and forged clear in the final sixteenth to score.

“This is a different horse than we saw last year during the Triple Crown campaign,” said trainer Gustavo Delgado's son and assistant, Gustavo Delgado, Jr. “He's really matured. Turning for home I thought we had a really good shot. The horse deserves this most of all. I'm very happy for everyone involved but we are so happy for Bodexpress.”

“This horse just showed so much run today,” winning rider Rafael Bejarano said. “I'm so proud of him. [Phantom Currency] was going so fast on the lead and we were able to sit a really good trip just behind him. He relaxed very nicely for me and turning for home I could feel I still had a lot of horse underneath me. He had a lot of energy in deep stretch when we needed it to hold off the rest of the horses. It's very special winning a race like this returning to Kentucky to ride this year. This is my home and we've had a lot of success here in my career. This was very special.”

Runner-up to future champion Maximum Security (New Year's Day) in the Florida Derby last season, Bodexpress was promoted to 13th due to the disqualification of that rival in the Kentucky Derby and dumped his rider at the start of the Preakness. Breaking his maiden next out at Gulfstream West last October, he won an allowance there a month later and finished his sophomore season with a third in the GIII Harlan's Holiday S. last December. Off the board in the GI Pegasus World Cup Jan. 25 and the GII Gulfstream Park Mile Feb. 19, Bodexpress was third in the GIII Hal's Hope S. Mar. 28 and filled the same spot in Saratoga's Alydar S. Aug. 9. Second in a Churchill optional claimer Sept. 5, the 4-year-old demolished the field by 11 1/4 lengths next out at Gulfstream Park West Oct. 17.

Bodexpress is the second Grade I winner for the expatriated Bodemeister, following GI Kentucky Derby hero Always Dreaming. He is also one of six graded winners and 19 black-type scorers for the stallion. The winner is the second graded winner and 15th stakes winner out of a daughter of City Zip. Pied a Terre has only produced one foal since Bodexpress, a juvenile filly by Gemologist.