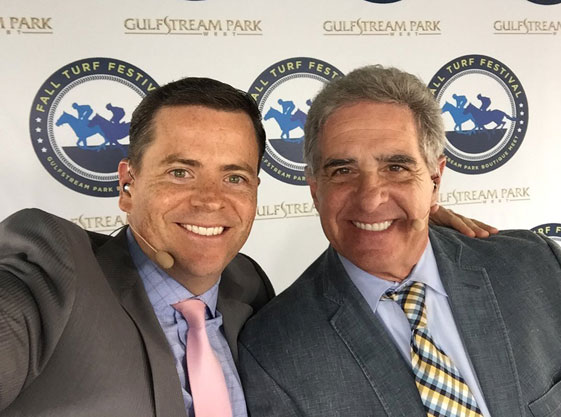 HALLANDALE BEACH, Fla.—Growing up in the shadow of Belmont Park as a racegoer and fan, it seemed to be destiny that Jason Blewitt became one of the faces of New York Thoroughbred racing. And while he was perfectly happy living out that dream, it was a sudden jolt out of that comfort zone which has shown the 39-year-old that his influence went far beyond the Empire State and landed him a permanent new home in sunny South Florida.

Last January, the New York Racing Association announced that Blewitt, who was with the company since 1998, was having his position of television host and analyst eliminated.

“They just wanted to go in a bit of a different direction,” Blewitt said. “They felt as though they didn't need a year-round host for their TV product. At that time, my identity was basically being the TV host for NYRA. I grew up there and New York racing was my life. I'm not the first person to ever get fired or lose their job obviously, but it was pretty traumatic.”

While absorbing that shock to the system, the Floral Park native was simultaneously stunned to discover how many people he had impacted, in all walks of racing, and how willingly those people rallied to his defense in his darkest hour. It was a stark counterbalance of disappointment along with a renewed appreciation for his place in the sport.

“I was really shocked, flattered and humbled by the outpouring of love from people,” Blewitt said. “I wasn't expecting or prepared for any of it. Fans, people I knew, people I don't know, it seemed like everyone was really upset by my dismissal and how it went down.”

Some of those people expressing support were some of the game's power players, who boosted the analyst with promises of better days ahead.

“Working in the industry, which I consider a gift and a privilege, I've met many people who are very successful in their own lives,” Blewitt said. “Without a doubt, they all said, 'This will be the best thing that ever happened to you, everything happens for a reason.' Being a year removed from it, I've learned that all those cliches were definitely true.”

By being in racing for almost 20 years, Blewitt had amassed a lot of contacts, and soon he had freelancing work with XBTV and Gulfstream Park. He wanted to be able to settle somewhere with his wife Kristina, however, and Gulfstream obliged, making him a full-time TV host starting Kentucky Derby week, alongside mainstays Ron Nicoletti, Acacia Courtney and track announcer Pete Aiello. Aside from a bit of a climate adjustment, Blewitt hasn't looked back.

“It was a little hot at first in the summer, but you get used to it,” he said. “It's really been a seamless transition. Working for The Stronach Group and Gulfstream Park has been so great. I look forward to going to work every day and it's been really neat transferring all the repetitions and experience I got in New York to South Florida racing, where you get learn an entirely new circuit year-round.”

That year-round aspect of Gulfstream racing is relatively new, as the track used to devote most of its resources to the December-April Championship meet, but now looks to present a more well-balanced racing calendar. Blewitt hopes to be part of the track's growth from in front of the camera after helping to develop NYRA television into a leader in racing media.

“As just a fan of the game and a horseplayer, the product here over the summertime was way, way, way more interesting than I originally thought it was going to be,” Blewitt said. “As this year-round signal continues to grow in terms of the quality of racing on a daily basis, I think the TV side and the presentation will match that growth in terms of improving and adding new features. It's just about giving more content and treating your existing customers as great as you can in the form of presentation.”

In addition to landing him on his feet at Gulfstream, the relationships and connections Blewitt has made in his life of racing also provided a surreal moment for him last month, only it happened back home, at the Big A.

A Todd Pletcher-trained, Mike Repole-owned and bred son of Uncle Mo, born and raised in New York like his namesake, Blewitt, appeared in the entries Dec. 1. Bet to favoritism, the colt cruised to a 5 3/4-length graduation. He followed up with a neck second Dec. 23 while running an 89 Beyer.

Blewitt's connection to Repole goes back to 2005, when he had a friend who worked for Glaceau, the company Repole founded that created Vitaminwater and later sold to Coca-Cola for $4.2 billion.

“My buddy was like, 'Dude, you have to meet my boss, he loves racing,'” Blewitt recalled. “It was friendship off the bat, and he's been like a big brother who I look up to with everything he's accomplished in his life and his personality. I know he took my dismissal at NYRA very hard and was upset, which I appreciated.”

Two weeks before Blewitt the horse ran, the human Blewitt got a text from Repole saying that he had a really good New York-bred who he thought was going to be a stakes horse.

“He said, 'You're either gonna love the name or you're gonna hate it,'” Blewitt remembered. “It was amazing. I called my wife at work, I called my parents, and it does seem like with the name on social media and even at Gulfstream, people are excited about him, which is so cool. And with him winning his first race, that was one of my greatest moments ever.”

Given what a huge transition he's made, it doesn't seem like only a year ago that Blewitt's life was turned upside down. The experience was valuable, however, not just because it led to a new challenge, but because it showed him that the enthusiasm he exuded for all those years hadn't gone unnoticed.

“I'm so happy that my love of the game and passion for the game came across on the air and translated to the other side of the camera,” Blewitt said. “That was the one resonating feeling I felt. And I want to be clear—I'm really proud of where I came from, that hasn't changed at all, but I also really love where I'm at now.”