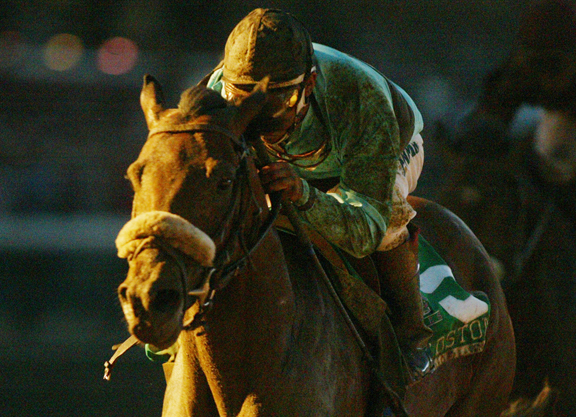 Birdstone (Grindstone–Dear Birdie, by Storm Bird), who sired the winners of two-thirds of the 2009 Triple Crown with runners from his first crop to race, has been retired from stud duties at Gainesway. He will live out his days at Old Friends Retirement Center in Georgetown, KY.

Bred by the late Marylou Whitney and trained by Nick Zito, the year-older half-brother to GI Kentucky Oaks winner Bird Town (Cape Town) won two of his three starts as a juvenile, including a 2 1/2-length success in the GI Champagne S. Eighth in a sloppy renewal of the GI Kentucky Derby in 2004, the bay was roundly dismissed at 36-1 in the GI Belmont S., with Smarty Jones (Elusive Quality) heavily favored to become the first Triple Crown winner in a quarter-century. Birdstone commenced a rally on the turn and employed his superior stamina to cause the upset, with Whitney openly apologetic to the racing public. He made his next start in the GI Travers S. nearly three months later, drawing clear by 2 1/2 lengths as a massive rainstorm was about to hit Saratoga. He retired to stud with a record of 9-5-0-0 and earnings of $1,575,600.

Birdstone sired nearly a third of his 22 stakes winners from his first crop, including Kentucky Derby upsetter Mine That Bird and Summer Bird, who would add the Belmont, Travers and Jockey Club Gold Cup en route to Eclipse Award honors. Birdstone was the sire of 10 graded/group winners in total, including GI Stephen Foster H. hero Noble Bird and Peruvian G1SW Birdie Gold.

“We are so grateful to John Hendrickson for allowing Old Friends to care for Birdstone in his post-breeding career,” said Blowen. “He's a living tribute to the late Marylou Whitney, and we plan to carry on her great contributions to the aftercare of both humans and horses. We're extremely grateful to John for trusting us to care for his tremendous stakes winner. Birdstone had a great life at Gainesway and we plan to continue that tradition at Old Friends.”