Big Test For Baaeed on Sunday 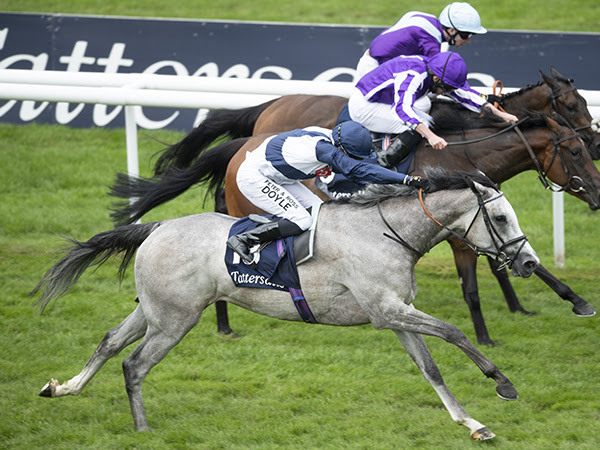 Occasionally, a division leader can come from nowhere during the course of a season and Shadwell's unbeaten Baaeed (Ire) (Sea the Stars {Ire}) fits that bill as he looks to step closer to the title of king of the milers in Sunday's G1 Prix du Moulin de Longchamp.

Not seen in public until after Poetic Flare (Ire) (Dawn Approach {Ire}) had run in all three of Europe's 2000 Guineas, the full-brother to the more stamina-infused Hukum (Ire) gave early indication of his innate ability on his debut at Leicester June 7 and shouted it loud 12 days later in a Newmarket novice. Demonstrative again with a four-length success in the latter track's Listed Sir Henry Cecil S. at the July Festival July 8, the bay did nothing to bank the flames of excitement with a 6 1/2-length verdict in the G3 Thoroughbred S. at Goodwood July 30. William Haggas has spoken of his desire to protect what he sees as a long-term project, but has had his hand forced by the manner of Baaeed's progression and this small and select affair will provide connections with a clearer picture of where they stand.

“He's going up another couple of grades and there's no point jumping the gun–let's see if he's up to it,” Angus Gold commented. “We're taking on a very good filly who is obviously a Group 1 winner already and very highly thought of. It's going to be a big test for him and we'll see if he can live up to the hype now. I'm told it's going to be nearly good ground. They might get a little bit of rain, but not too much. He's won on good-to-soft, so I don't think the ground will worry him unless they get a downpour and it goes heavy or something.”

Despite the visual and technical impression of Baaeed's successes, he has yet to meet a rival of the calibre of Snow Lantern (GB) (Frankel {GB}), who holds the bragging rights of being the winner of one of the season's leading contests, the G1 Falmouth S. That July 9 Newmarket contest has thrown up the subsequent winners of the G1 Sussex S., G1 Prix Rothschild, G1 Nassau S., G2 Celebration Mile and G3 Atalanta S. with sheer class running through the form top to bottom. Rockcliffe Stud's TDN Rising Star, who was behind the Falmouth third Alcohol Free (Ire) (No Nay Never) when rain intervened both in Royal Ascot's G1 Coronation S. June 18 and the Sussex at Goodwood July 28, was supposed to be building up slowly to the G1 Sun Chariot S. later this month. Like Baaeed, she is here purely on the basis of her wellbeing and should make this a genuine clash with experience and the sex allowance in her favour.

Ballydoyle's contenders can never be discounted from these races, but Order of Australia (Ire) (Australia {GB}) and Lope Y Fernandez (Ire) (Lope de Vega {Ire}) have to find significant improvement on their best efforts this term when third in the Aug. 15 G1 Prix Jacques le Marois and second in the June 15 G1 Queen Anne S., respectively.

That also applies to Godolphin's Victor Ludorum (GB) (Shamardal), who has not at any time since exceeded the level of his promising success in the 2019 G1 Prix Jean-Luc Lagardere to any major degree. Even a confidence-boosting win in a soft renewal of the G3 Prix Messidor at Chantilly July 18 failed to have the desired effect, as he was a poor seventh in the Jacques le Marois and it will take all of Andre Fabre's considerable guile to conjure the requisite revival here.

Godolphin's Lisa-Jane Graffard summed it up when saying, “Victor Ludorum ran below expectations last time, but pulled out fine afterwards and appears to be well in himself both physically and mentally. We have no real explanation for that run and would love to see him return to his best form here, although we are realistic about the task in front of him.”

Sisfahan Faces His Elders in Germany

Sunday's other top-level contest is the G1 Wettstar Grosser Preis von Baden, where Darius Racing's July 4 G1 Deutsches Derby hero Sisfahan (Fr) (Isfahan {Ger}) tackles the older horses headed by Godolphin's July 30 G3 Glorious S. scorer Passion and Glory (Ire) (Cape Cross {Ire}). One of Saeed bin Suroor's crew of improvers, the 5-year-old has won five of his last six starts on European turf and Polytrack and is lightly-raced and unexposed for his age. “Passion and Glory has been in excellent form since coming back to the UK this season,” his trainer said. “He deserves to take his chance at this level following a nice win at Goodwood last time. His best performances have been with give in the ground and it was soft at Baden-Baden earlier in the week, although it looks as though it will dry out for Sunday. He heads out there in good form and we are looking forward to seeing how he gets on in a big race like this.”

He said, “He has done well since the Pat Eddery S. and a repeat of that effort will make him very competitive.”

Rebel Path, who was second to the smart Topgear (Fr) (Wootton Bassett {GB}) over six furlongs at Deauville Aug. 5 before going back to the same track and trip to get off the mark 19 days later, hails from the Andre Fabre stable successful eight times but not since Diamond Green (Fr) in 2003.

“Rebel Path has some good form under his belt, having run against strong opposition at Deauville on both his starts so far,” Lisa-Jane Graffard said. “This is a big test for him, stepping up in class and trip, but he is going the right way.”