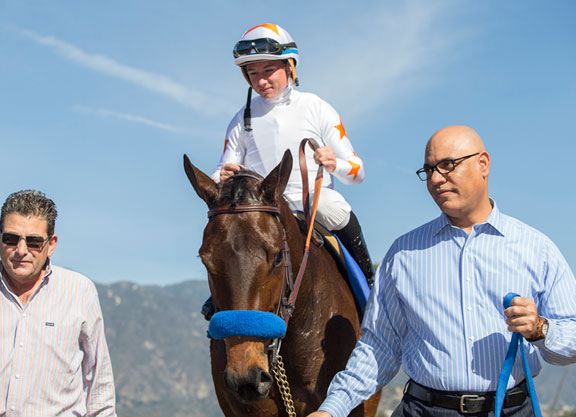 Look back at the big talking points in the Thoroughbred industry last year, and at or near the top of the list has to be when Kerri Radcliffe materialized seemingly out of nowhere at Fasig-Tipton's Gulfstream sale and spent $1.55-million on a pair of 2-year-olds for the unheard-of Phoenix Thoroughbreds. As the sales season wore on and Radcliffe continued to make headlines-the top lot at breeze-up sales in the U.S. and France and again at Arqana's August yearling sale, plus a 1-million gns colt at Tattersalls and the $3-million Nickname (Scat Daddy) at Fasig November-we continued to learn more about Phoenix Thoroughbreds, a Dubai-based investment fund with aspirations to be involved in racing, sales and breeding at the top level globally.

Phoenix Thoroughbreds is the brainchild and baby of the Bahrain-born Amer Abdulaziz, who confirmed with a tone of pride that Phoenix is in the final stages of being recognized as a regulated investment fund, a process that should be complete “in the next few weeks.”

“There is no other [Thoroughbred] investment fund in the world that is regulated except Phoenix Thoroughbreds,” he said. “It will be regulated in the next few weeks; it's in the final stages.”

“The fund is registered in Luxembourg and the head office is based in Dubai, with operations in different countries,” Abdulaziz continued. “We're focusing mostly on the U.S. market and the European market which is Ireland, France and the UK, and Australia and New Zealand.”

Abdulaziz, now a Dubai resident, grew up on an Arabian horse farm and was formerly a champion owner of Arabians. He said when he moved to America to study finance at the University of California Berkeley, however, the seed was planted for a life in the Thoroughbred business.

“I was close to Golden Gate Fields and I went there all the time, so that's when I first fell in love with Thoroughbreds,” he said. “I had a good friend who was racing Thoroughbreds so I went with him to all the races and started reading about the whole Thoroughbred industry and building my own knowledge and database. When I graduated I went into the corporate world, and decided no, this isn't what I'm going to do, I'm going to go back to horses. That's where the fund idea came from.”

Abdulaziz said that the time between him getting Phoenix started and Radcliffe bidding on those top-of-the-market 2-year-olds at Gulfstream Park was about five years. During that time, in addition to getting his team together, Abdulaziz was putting together proposals to convince high net worth individuals to invest in Thoroughbreds.

“Our focus was not on the horse people, but more high net worth individuals and [people in] the financial industry,” he said. “The equine people, we were thinking of leaving them until last, when we've built up our own track record. Then we can go to them and say, 'this is who we have, this is our track record', and if they want to join they can. It took a lot of time to get everything together and bring the whole team, the right people, together; not only the horse people but the management and finance people as well.”

Abdulaziz said Phoenix Thoroughbreds has been organized as a five-year investment fund, with the option to extend the fund a further three years, but “investors sometimes don't like to lock up their money for seven years, so we say a five-year fund,” he explained. All assets will be valued at the end of five years and purchased by the second fund.

It would be fair to say, with the opportunities Phoenix Thoroughbreds has had from its breeze-up purchases, it is doing well. The very first filly Radcliffe bought for Phoenix at the Gulfstream sale was a $750,000 daughter of Uncle Mo named Dream Tree, who is unbeaten in four starts for Bob Baffert including the GI Starlet S. and GII Las Virgenes S. The other purchase from that sale, the $800,000 Take Me With You (Scat Daddy), broke her maiden by nine lengths at Windsor in September for Jeremy Noseda. Phoenix's $1.7-million OBS March topper Diamondsandpearls (Congrats) broke her maiden by 6 1/4 lengths in a 'TDN Rising Star' performance for Baffert in July but was injured when fourth in the GII Sorrento S.

Walk In The Sun (Street Sense), the €1.4-million top lot at Arqana's breeze-up sale last May, broke his maiden over Kempton's all-weather at first asking on Jan. 26 and will run again in “about 10 days' time,” according to Abdulaziz. Walk In The Sun, a son of GI Kentucky Derby winner Street Sense, and Gronkowski (Lonhro {Aus}), a 300,000gns Craven yearling also in the Noseda yard, look likely to have targets in America.

“He's a beautiful horse and he has the right pedigree,” Abdulaziz said of Walk In The Sun. “I think he'll do very well on dirt.”

Abdulaziz said the Kentucky Derby is the race he'd most like to win anywhere in the world, and that could be a target for Walk In The Sun. A decision on whether the strapping bay tries the dirt in the G2 UAE Derby on Mar. 31 will be made after his second run.

In the meantime, this early success-with plenty of promise from a crop of newly minted 2-year-olds-has led to increased interest from investors, Abdulaziz said.

“Nowadays, because of the international success we have had, people are getting to know us better and we're getting calls from people all the time,” he explained. “The success we've had so far has made our lives a lot easier. There's been a lot of interest and we're closing more deals. New investors are coming on board as well.”

Phoenix's Australian arm gained some publicity last week when it was announced it had partnered with another young, up-and-coming force, Aquis Farm, to purchase and stand the Group 1-winning 2-year-old Invader (Aus) (Snitzel {Aus}) at Aquis in Australia. The announcement came about six weeks after Phoenix partnered with Aquis, Yulong Investments and trainer Ciaron Maher to purchase a colt by I Am Invincible for A$1.6-million at the Magic Millions Gold Coast Yearling Sale. While Radcliffe manages Phoenix's Northern Hemisphere operations, that responsibility in Australia falls to David Lucas, who made a splash buying up mares and weanlings for Phoenix at last year's Australian breeding stock sales. In addition to purchasing one of the top-priced lots, Phoenix also entered the sellers' market at the Gold Coast sale, selling four pinhooks for a combined A$1-million. They sold two at the Inglis Classic sale earlier this month and have nine to sell at Inglis's Easter sale in April.

“We're adopting a different strategy in Australia,” Abdulaziz said. “We're focusing more on the breeding side; we have our stallion [Invader] that we bought 25% of. We have about 22 top-quality broodmares and we have the yearlings and 10 2-year-olds that will be racing soon. So far the Northern Hemisphere is mostly focusing on the racing side of it, but the idea is to move into the breeding side as well and that's going to come with time.” Phoenix also bought into the National Stud's Group 1 winner Aclaim (GB) (Acclamation {GB}), who enters stud this year.

Phoenix has its 2-year-olds in training in Australia with the likes of Ciaron Maher, Toby Edmonds and John O'Shea, and the first of those, colt called Hard As (Aus) (All Too Hard {Aus}), will debut on Sunday at the Sunshine Coast for trainer David Vandyke.

If Phoenix in Australia can pick up the momentum the company has started with in the Northern Hemisphere, it shouldn't be long before it is making an impact.

“We're very excited that we're the first soon-to-be-regulated investment fund worldwide in the Thoroughbred industry,” Abdulaziz reiterated. “We just want to make sure we do well so we can keep our investors happy so we can come back to the auctions and expand our operations.”