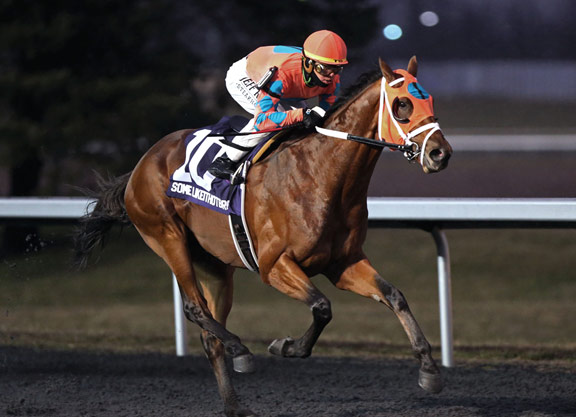 Somelikeithotbrown (Big Brown), winner of the local John Battaglia Memorial S. last time Feb. 15, repeated that effort with a decisive victory in Turfway's GIII Jeff Ruby Steaks S. Saturday, collecting points towards a spot in the GI Kentucky Derby in the process. Rushing away from post 10 to contest the pace alongside Five Star General (Distorted Humor), the Empire-bred gained a narrow lead as through an opening quarter in :23.61 and registered a half in :47.03. Galloping along comfortable under a motionless Tyler Gaffalione, the 3-5 chalk kept on finding in the lane, extending clear to win as he pleased.

Graduating at second asking in a nine-panel turf test for NY-breds at Saratoga in August, Somelikeithotbrown completed the exacta in both the Spa's GIII With Anticipation S. Aug. 29 and Belmont's GIII Pilgrim S. Sept. 29. He closed out his juvenile campaign with a third-place effort, beaten less than a length, in the GI Breeders' Cup Juvenile Turf at Churchill Downs Nov. 2. and was making his seasonal and synthetic debut in the Battaglia last time.

Somelikeithotbrown is the 28th black-type victor and ninth graded winner for his sire Big Brown. He is the second foal out of Marilyn Monroan, who is also responsible for a 2-year-old colt by Mission Impazible and a yearling colt by Temple City. She was bred back to Palace Malice last spring. The winner hails from the family of champion Stevie Wonderboy (Stephen Got Even) and GSW & MGISP Theysken's Theory (Bernardini).