Bell's The One California-Bound 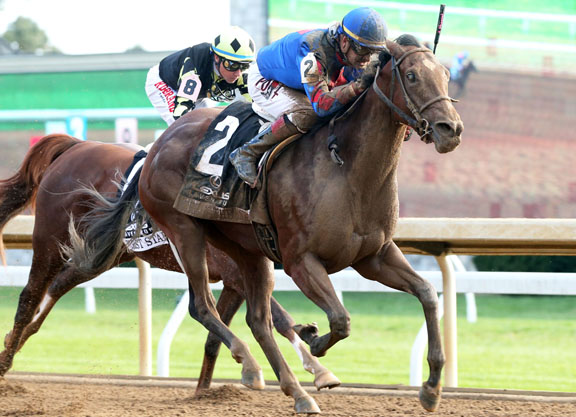 Bell's The One | Coady

Lothenbach Stables' Bell's The One (Majesticperfection), the impressive last-out winner of the GII Lexus Raven Run S. at Keeneland Oct. 19, was en route Monday evening from the Fair Grounds to Santa Anita, where she will make her next appearance in the GI La Brea S. on opening day of the winter/spring meeting Dec. 26.

The $155,000 Fasig-Tipton July graduate has excelled at the seven-furlong distance of the La Brea, finishing runner-up in the GII Eight Belles S. at Churchill Downs May 3 and to future GI Breeders' Cup Filly & Mare Sprint and likely Eclipse Award winner Covfefe (Into Mischief) in the Listed Dogwood S. in Louisville Sept. 21 before rallying from well back to take the Raven Run by 1 1/4 lengths.

Bell's The One has worked four times since her arrival at trainer Neil Pessin's winter base in New Orleans, capped by a half-mile move Dec. 15 that was timed in :48.40 (12/149).

“Visually it was a very impressive work,” Pessin said. “I had her a bit faster than the clockers, but we broke her off about two lengths behind her company and she beat her five lengths and did it very easily. She's as good as she can be right now.”

While the La Brea field does not figure to include Covfefe, Filly & Mare Sprint runner-up Bellafina (Quality Road) is likely for the race, a fact not lost on Pessin.

“Bellafina is obviously very tough at Santa Anita,” he admitted. “If she runs [her Filly & Mare Sprint] back, I can't beat her. But if my filly runs her race, I don't have to worry about anything else. She's been doing well, we wouldn't be going if she wasn't 110%. When they're doing well, you take a shot. We're going to take a shot and see what happens.

Pessin, who is scheduled to arrive in California on Christmas Eve, confirmed that Corey Lanerie would retain the mount in the La Brea.