Belladonna Partnership Off and Running 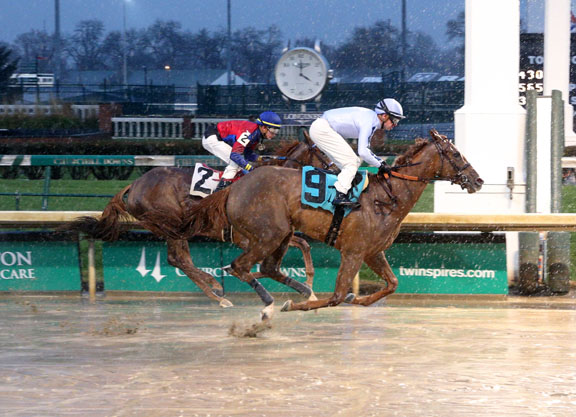 David Ingordo was busy buying juveniles this past spring on behalf of a newly formed racing partnership and, by the final 2-year-olds in training sale of the season last June, the bloodstock agent had purchased six fillies in the name of Belladonna Racing. The sextet, now under the care of trainer Cherie DeVaux, have gotten off to a flyer on the racetrack, with the fledgling partnership’s record currently standing at nine starts and five wins. The group enjoyed a banner day at the track with a pair of winners on the “Stars of Tomorrow II” card at Churchill Downs Saturday.

“A lot of people in Belladonna are new to racehorse ownership, so it’s been a learning experience for them,” DeVaux said. “And they’ve all been great. We had a couple of setbacks as far as Thoroughbred ownership goes, but I couldn’t be more pleased with the success they are having now and how it’s gone so far.”

DeVaux served as an assistant to trainer Chad Brown for eight years before going out on her own in the spring of 2018. One of her initial clients was Paul Manganaro, who helped bring people into the Belladonna partnership which includes some 25 owners.

“It started with just networking through a few people that we knew were interested,” DeVaux explained. “It was a project with Paul Manganaro and David [Ingordo]. He started networking through some of his clients. He is from the racing industry, his family is very deep into it, but he just got some people that really wanted to get their toe in and then it was just word of mouth, a couple of people had friends who wanted to get into it. They put their money together and it has grown from there, from a seedling idea that has really taken off.”

Of the decision to invest specifically in fillies, DeVaux said, “It was for the residual value. The intention was to buy fillies who had some pedigree, so that if they never ran they would retain some sort of value that they could get some return on their investment.”

Three of the fillies were maiden winners in Kentucky this fall, with Curlinesque (Curlin) returning to finish fifth in the Oct. 27 Rags to Riches, and a fourth filly broke her maiden at Indiana Downs in September.

“We had pointed her towards the allowance race and the added distance because it was the next logical progression,” DeVaux said. “I thought running her in the [GII] Golden Rod going 1 1/16 miles and two turns [Saturday] would be asking a little bit much early on in her career. She has always shown that she had a lot of ability and she has a lot of class to her. She had to run and be professional to get it done, so I was extremely pleased with her effort.”

Bayerness shipped to Payson Park Monday and will get a few easy weeks before gearing up for what DeVaux is hoping will be a big sophomore campaign.

“We are contemplating a few different routes for her,” she said. “Obviously, the big pie-in-the-sky goal for her would be the GI Kentucky Oaks. So we’ll just try to get a plan together for her, whether it be Florida or maybe through Fair Grounds to get her there. Right now, she needs to do a little growing. We are going to give her a few light weeks to get her body to come around.”

Earlier on Saturday’s Churchill card, Veruca (Twirling Candy) broke her maiden going six furlongs (video) in her second start. She had opened her career with a third-place effort over the turf at Keeneland Oct. 23, but moved to the main track over the weekend.

“She is bred to handle both surfaces,” DeVaux said. “We tried the turf at Keeneland and she actually ran very well. But she trained very well on the dirt, so we put her in the dirt race. It was a sealed, sloppy track and she handled it well and she put in a really professional effort. She doesn’t strike me as a filly who will stretch out a route of ground, but she can definitely go farther than six furlongs.”

Curlinesque was a debut winner at Churchill Sept. 26, but was well beaten in the Rags to Riches.

The team thought highly enough of Curlinesque that they made an usual yearling purchase this fall, purchasing the filly’s half-brother by Empire Maker for $270,000 at the Fasig-Tipton October Sale.

“She was ready to run at Keeneland and got very sick on us,” DeVaux said of the filly. “Before she got sick, she was really showing that she had some ability and a lot of talent. So we’re going to have to start back at zero with her. She acts like she can have a lot of talent as well.”

The six fillies will eventually be returned to the sales ring.

“After the horses run the course in their racing career, they will be sold at public auction. That is how the partnership is structured,” DeVaux said.

The partnership is already gearing up for the 2020 juvenile sales.

“There are bigger plans,” DeVaux said. “As you can imagine, a lot of these guys that are new have friends who are interested in doing it. I’d have to say the budget has grown substantially from what it was this past year. We waited until they were all up and running before we went to fund raise for the next group because people are more excited when the horses are all running and doing well. A lot of the partners just wanted to see how it was going to pan out before they wanted reinvest into the next year.”

For the moment though, the Belladonna Racing partners are enjoying the quick start to their ownership experience.

“There is usually a big group [at the races],” DeVaux said. “It’s a mix in age, but there are a lot of young people–relatively for the industry. They have really good, positive, fun energy.”