Behind The Lens: Kurtis Coady 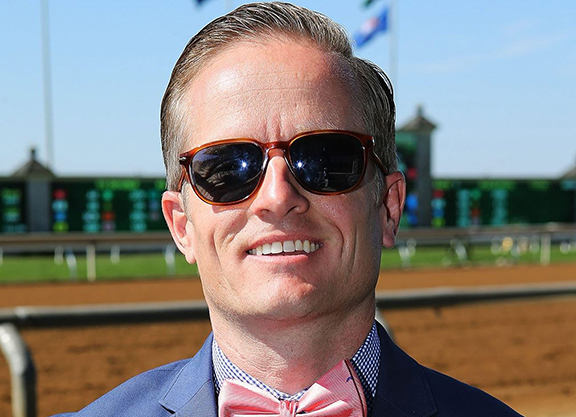 This is the fourth installment in a series highlighting racetrack photographers.

Around 1960, a funeral director decided he’d had enough of the cold Chicago winters, so he uprooted his family to Phoenix to ply his trade in a warmer clime. Upon arrival, Jack Coady, Sr. learned his Illinois mortician’s certification didn’t match Arizona’s requirements, so he set out to look for another line of work. He liked photography and caught on with the Arizona Republic newspaper. On one of his very first assignments, he was sent to shoot the races at Turf Paradise.

Jack Sr. enjoyed the racing so much that he accepted a position as the Turf Paradise track photographer in 1962. As the years went on, sons Jack Jr. and Jeff helped to expand the family business, taking winner’s circle pictures, operating the race timing, and later providing video services for numerous small tracks across the Southwest.

By the 1990s, a third generation of Coady photographers started getting involved. Jeff was based primarily in Texas, and his sons, Shawn (now 44), and twins Kurtis and Kevin (now both 40) took turns behind the lens while also learning the bookkeeping and how to move the whole operation from meet to meet.

In high school Kurtis wanted to be an architect. But then he took an advertising design class that was progressive in 1996 because of its use of computerized technology to edit and lay out photos. This sparked an interest in computer programming, and even before Kurtis started pursuing an information systems degree at the University of Texas, he began laying out for his father a vision of how digital photography and transmitting images over the internet was about to revolutionize the industry.

The Coadys bet big on that transition to digital, and the gamble paid off in the form of landing more track contracts. The family decided to get out of the timing and video end of the business to concentrate on what it did best: shooting and supplying racetrack photography for 32 venues across the country, including all the Kentucky tracks and as the official photographer of the GI Kentucky Derby.

Kurtis now splits the shooting with Shawn, and together they oversee a staff of 50 Coady photographers who rotate from track to track. Kevin handles the accounting while Jack Jr. remains involved as an ownership partner. Jack Sr. (2008) and Jeff (2013) have both passed away. But speaking from his home and horse farm in Fisherville, Kentucky, Kurtis detailed how the third-generation family business still resonates with their founding spirit. An edited and condensed transcript follows.

TDN: Describe the “Ah-ha!” moment when, as a kid in high school, you convinced your dad to alter the fundamental way the family had run its family business for close to four decades.

KC: At the time, we were all film. And that jump into digital, at that time, was very expensive. The very first professional body camera was the Nikon D1, and it was stupid expensive. Especially if you consider that we owned all the film equipment and had no overhead. But my father said, “We need to do this big. We need to go big.” So we went full-steam ahead; a huge investment for my father. But we went from a handful of contracts to the point where we now serve 32 tracks. My father, he’s second generation. I’m third generation. That was very inspirational, because all we did day and night was work together to make that transition.

Compared to other photographers, we’re very data-oriented. So much so that everything we do is on one server out of Phoenix that we built ourselves. It’s 120 terabytes. And every Coady computer across the country is synched to it. So if I’m at Keeneland and an owner walks into the office who just had a horse win at Indiana Grand, no problem. I can print those photos in two minutes. I programmed our first six generations of websites along with my father and Shawn. On our current website, we have 250,000 races available for sale. And some of those races have 30 photos posted.

TDN: Coady Photography’s first all-digital meet was Delta Downs in 2001. But it still took a few years for larger tracks to embrace that format. Where and when was the big breakthrough?

KC: Our biggest, biggest break was getting the Oaklawn Park contract in 2003. At the time, I always thought we we’re a mom-and-pop business. And, at the time, I didn’t want to be a photographer. I wanted to be an architect and go off and do my own thing.

Then we went to Oaklawn and we had Azeri, Smarty Jones, Curlin. All these big horses just kept hitting, year after year. And as the racing got better for us and the bigger tracks started noticing us, I kind of just realized that this was my calling and what I was born to do. It was so amazing for us. You just felt so alive. And that’s pretty much the same for my brothers. Shawn has worked for the family company since he was 16 years old. And Kevin’s actually a commercial pilot. He quit flying cargo planes and working as a flight instructor to come work for the company.

TDN: To what extent, if any, do emotions creep in now that you’re routinely shooting elite-level horses at history-making events?

KC: My first Derby [that Coady Photography had under contract] was Nyquist in 2016. I wasn’t nervous, and neither were my brothers or my staff. We were just meant to be there. We were ready. And it didn’t hit me–at all–until the crowd started singing “My Old Kentucky Home.” Then I had to turn away. I was a wreck. I just started bawling. Because my dad missed it. When my father died, it was before the Breeders’ Cup at Keeneland. He had shot the Breeders’ Cup before, but never as the official photographer of the host track. And that was hard, knowing he had missed both his first official Derby and his first official Breeders’ Cup. Those were his gigs as much as mine.

TDN: What are some shots you’ve taken that stand out?

KC: The most important photo I ever took in my life was Justify [at the 2018 Derby] with the rain coming down; the toughest lighting. And everybody on my staff nailed it. You would have thought it was full daylight outside. It was beautiful. My shot, the shutter was perfect. I stopped the rain. The background with the military personnel standing at attention. Everything in my picture was perfect.

I also had a shot of American Pharoah in the [2015 GII] Rebel S. at Oaklawn. It had rained really bad. A small puddle settled on the track after they floated it. And he hit that puddle and broke his shoe. So in my shot going to the finish, his shoe’s halfway off. You can see it perfectly. And the way he stumbled just a little bit, yet prevailed with that monstrous energy, I remember thinking, “This horse is going to be the only Triple Crown winner I’ll see in my lifetime.” And that was at the Rebel S. in March. Then Justify came around the corner three years later to win his Triple Crown, and that too was life-changing.

TDN: Lately there hasn’t been much energy at tracks because fans either aren’t permitted or attendance is scaled back because of COVID-19 restrictions. What was it like this spring shooting big races in front of empty grandstands?

KC: For a while, we just had Oaklawn and Will Rogers going. Normally, we would have had about 16 tracks running at that time. I was shooting at Oaklawn, and it was tough. It was weird. And all I could think of every day was, “I wish so many people were here.” So many great fans, people I’m friends with, horse owners who couldn’t get in because of the lockdown. I was just thinking how fortunate I was to be one of the ones actually allowed on the grounds.

TDN: Your work takes you to far-flung tracks that most people only see on the simulcast feed. Can you list a few that stick with you because of either the background or the ambience?

KC: It’s so hard to nail them all. Shooting at Hialeah, very briefly in 2001–the flamingoes and the absolute beauty of all of it. And then you go out west and see a place like Sunland Park. It looks like it’s in the middle of the desert. You watch it on video, but it doesn’t do it justice with the mountains in the background.

Turf Paradise–the amount of work they put in that infield and the condition of that turf course. And everything there is that 1960s architecture. It’s like going back in time.

Then you have the small tracks like Delta Downs. It’s just a little bullring. But the feel is amazing–it just feels “Louisiana.” The same with Evangeline Downs.

It’s neat because we get to see every bit of this country going to all these tracks. And every track has an appeal. There are so many things that people don’t get a chance to appreciate.

TDN: What advice do you have for photographers who aspire to shoot horse races for a living?

KC: I think the best advice I could give is come shoot with us. Drop me a note saying, “I just want to shoot for the weekend to learn how to get into this.” We’ll teach you the ins and outs. We love it. We’re happy to help. We want to be there for the community of horse racing photographers. And the same thing goes for amateur photographers. If you can actually show to me that you’re dedicated and I feel it, I’ll put you on the track right next to me and we can shoot together.

TDN: What about words of wisdom for fans who just want to get decent shots on their phone cameras from either the stands or near the rail?

KC: Of all the cell phone shots I’ve ever seen, the shots that really hit home are the shots where the crowd stands out. Get that finish with the crowd in front of you. Show that excitement. Show those hands in the air, the screaming, the cheering. Everybody gets the shot of the horse. But get the shot of the reason we’re running that horse–the crowd. Those are the best shots.