Behind the Lens: Adam Coglianese 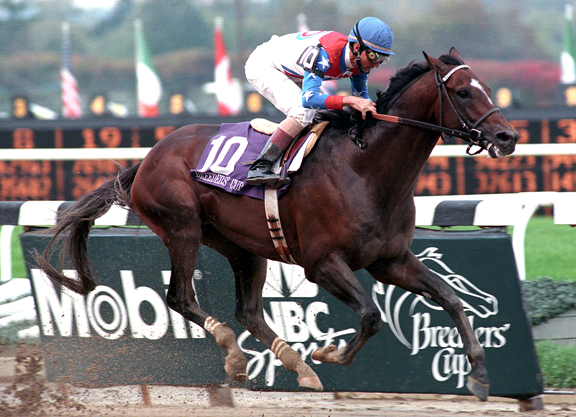 This is the second installment in a series highlighting racetrack photographers. We'll be asking about the most memorable horses, races, and people they've viewed through the lens and talking about how the craft of equine imagery has evolved. Each time we profile a photographer, TDN will feature their hand-selected favorite shots in multiple editions throughout the week.

Members of the Coglianese family have been photographing horses at New York racetracks since the early 20th Century.

Bob Coglianese, 85, first started shooting horse races in 1952 under the tutelage of an uncle who began apprenticing as a racetrack photographer decades before. They formalized what was at first a niche business by setting up an on-track office in 1962 to sell black-and-white prints to horsemen. A decade later Bob became the New York Racing Association (NYRA)'s official photographer, modernizing the operation to color photography.

Bob shot Secretariat's 1973 Triple Crown romp at Belmont Park and won two Eclipse Awards (one for his noted “Savage” shot of one horse trying to bite another during the stretch run of the 1980 Tremont S.). In the 1990s, he brought his son Adam on board to learn and eventually take over the daily operation of Coglianese Photos. Together, father and son made the leap to all-digital shooting while expanding to include Gulfstream Park in Florida.

TDN spoke with Adam, 47, about his shooting preferences and how the family business has evolved. An edited transcript follows.

TDN: When I hear about you learning racetrack photography from your dad, I have visions of you running around Saratoga as a kid with a camera in your hand getting access to all these neat places that usually are off-limits to children. Was that how it happened?

AC: Not at first. I was more interested in computers during my younger education. I got interested in racetrack photography in my high school years. I enjoyed going to the track and I enjoyed the sport, primarily at Aqueduct, and then I started to follow my father around. I spent half the summer season at Saratoga–at that point it was only a four-week meet. But I started from the ground up. My father wanted me to work in a one-hour photo developing shop before he'd let me start taking pictures at the track. So I learned how to develop film, both color and black-and-white, at a lab on Long Island. He wanted me to have a little schooling in the basics before I could get to be where the action was.

TDN: Please explain a bit about how the business is currently structured.

AC: My father's retired now. So I shoot both New York and Florida. I have staff on both circuits, and I'm back and forth all year. I never miss a Grade I race, but unfortunately, I missed this year's [GI Curlin] Florida Derby because that was the week that the stay-at-home quarantines went into place. Right now, I am in New York waiting out the pandemic.

I have a great team of photographers at each track. Day to day, I usually have three people shooting–two action shots and an inside person manning a remote camera under the rail. They've all learned under my direction what I require from them on a daily basis. I am ultra-critical of my work, and I pass that on to people who work for me. When it comes to big races, I bring in six to eight other photographers to shoot different angles–on the turns, different views from the building, inside [rail] shots, and remote shots and gate shots that we will set up.

We operate completely differently than we did 25 years ago when we had to develop film and print photos using chemicals and darkrooms. Digital technology has really sped things up. I can give clients their winner's circle photos before the next race.

TDN: On the NYRA circuit you have three distinct tracks running in four different seasons. Tell us how a photographer sees them.

AC: Each track is unique in its way. Saratoga has the greatest lighting because the sun is in front of the horses most of the day. At Aqueduct, in the fall and wintertime, the light is also quite good, but the air quality is not as hazy, so you get nice, crisp shots. Belmont Park is huge and it's a great track to take photographs in the morning.

TDN: Two of the tracks you cover–Saratoga and Gulfstream–are known for apocalyptic rainstorms. What's the plan of action when the skies open up?

AC: At Saratoga, we get these monstrous thunderstorms that roll in the middle of a beautiful day. For my full-time photographers, we have rain suits, garbage bags, camera coverings, and we bring out towels. And I usually insist that for big races in thunderstorms, we still shoot everything we would normally shoot if it was sunny out. It's a challenge, but we get through it. Gulfstream, the same thing. I will not stop shooting, and I will not limit my camera usage for different angles just because it's raining.

TDN: So has Mother Nature claimed a few cameras over the years?

AC: Never. I am very protective of the quality of my work and my gear. And, like I said before, I instill it in my employees to make sure things are always kept perfect, the quality's there, and the cameras are in tip-top shape. If they come back to the office with mud on them, the first thing we make sure to do is clean them off.

TDN: To fans, shooting a winner's circle photo looks pretty routine. But there's a lot to choreograph in a short time frame. The winning connections are excited, and sometimes so is the horse. What's does managing all that involve?

AC: That's probably the hardest shot to take at the racetrack. It requires a tremendous amount of patience and being aware of every individual that's in that winner's circle. Big syndicates all have multiple owners. I make sure before I shoot that everybody's eyes are looking at me. It's not easy, because you also want the horse to look good. So if the horse is acting up, you have to make sure everybody's looking at the camera and that the horse is cooperating. It doesn't always work that way, but you have to go into the situation with patience, and don't shoot just to shoot. You try to make everything as perfect as it can be.

TDN: What are some action shots from your career that stand out?

AC: I'm kind of biased in that my favorites go back to the time when I started full time in the business. I loved my shot of Cigar in the Breeders' Cup of 1995. Rachel Alexandra winning the [GI] Woodward at Saratoga is another. I did a couple of rain shots that I really liked with the horses really standing out with the photo-finish lights on them. And of course, more recently, American Pharoah. I did a nice wide-angle fish-eye shot of him winning the Triple Crown with the full Belmont grandstand in the background.

TDN: Do emotions ever creep in during those history-making moments? If so, how do you keep them from distracting you?

AC: I treat every horse race the same, so emotions don't really get in my way. I did get excited after seeing American Pharoah win the Triple Crown. But I don't get carried away or nervous when I see them coming down the stretch.

TDN: How about some advice for amateur photographers with a smart phone camera who just want to take some decent shots at Saratoga?

AC: If you're going to shoot movement, like a horse race, the first thing I would do is Google “how to pan.” You have to move with the speed of the horses–that's panning. What you see through the lens is what you're going to get, because your hand is quicker than the eye. If you're going to take finish action photos, I would say stand against the rail past the finish line. If you don't have access to that, I would say stand mid-stretch by the eighth pole. Or if you're up early in the morning, I would say shoot some workouts. There's beautiful morning light at Saratoga, and I would highly suggest taking the backstretch tour. The lighting is fantastic, and you'll probably get to see the steam coming off the horses as they're being washed and cooled out.

TDN: How about advice for someone who's a more experienced photographer who wants to make the leap into shooting horse races professionally?

AC: I would say give me a shout, because I'm always open to teaching new people, and I'm always considering adding to my staff when it comes to big racing days.

TDN: Do you have a son or daughter who might be interested in carrying on the family business to yet another generation?

AC: My son Ethan is 14. I don't know what he wants to do yet or if he's interested. But he spends the summer with me, he's always grabbing a camera, and he wants to take pictures of horses when he's with me.