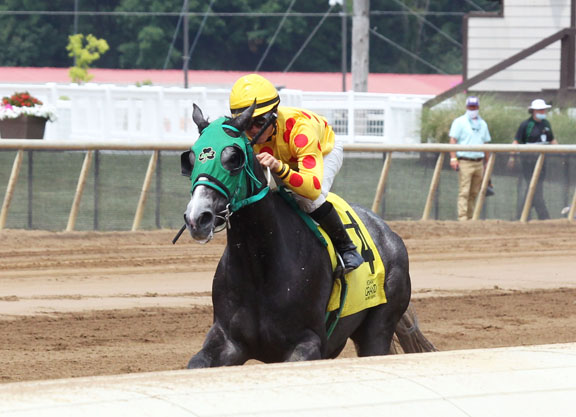 Baytown Bear (Upstart) cruised to a 9 3/4-length victory to become the first winner for his freshman sire Upstart (Flatter) at Indiana Grand Tuesday. The gray gelding, who RNA’d for $9,500 as a Keeneland September yearling, was well-beaten in a pair of efforts sprinting at Churchill Downs, over the main track May 22 and over the turf June 5, and was coming off a fourth-place effort going 5 1/2 furlongs over the dirt in Louisville June 12.

Sent off the 9-5 second choice in this stretch-out to a mile, Baytown Bear was floated wide around the first turn and pressed the pace while three wide. He raced in tandem with 1-5 favorite Onenightstandards (Archarcharch) through fractions of :24.71 and :45.91. The two favorites turned for home well in front of the rest of the field and Onenightstandards began inching clear despite drifting out. The favorite suddenly bolted to the outside rail with a furlong to run, leaving Baytown Bear in total isolation to the finish.

Baytown Bear is out of And You Can, a half-sister to GI Kentucky Oaks winner Believe You Can (Proud Citizen). The mare, in foal to American Freedom, sold for $12,000 at this year’s Keeneland January sale. She produced a colt by that sire this spring and also has a yearling filly by Creative Cause. Click for the Equibase.com chart.