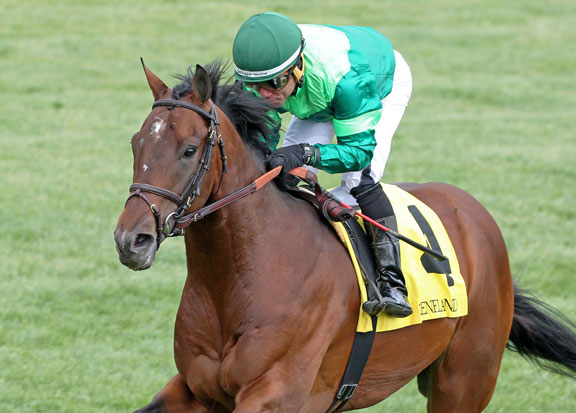 A trio of top-rung winners head a field of nine in Friday's feature at Keeneland, the GI Maker's Mark Mile S. Leading the fray is Raging Bull (Fr) (Dark Angel {Ire}), who most recently marked his seasonal debut with a victory in the GI Shoemaker Mile at Santa Anita May 25. A three-time graded winner in 2018, including Del Mar's GI Hollywood Derby, the French-bred hit the board in three of five starts last term, including a second in the GI Fourstardave H. at Saratoga in August followed by a third-place finish, after being moved up via DQ, in the GI Woodbine Mile in September. Accompanied by Joel Rosario, Raging Bull is trained by Chad Brown, who is also represented by G1 St James's Palace S. hero Without Parole (GB) (Frankel {GB}).

Winless in eight starts since that career-high performance in 2018, the Gunther family homebred–third to stablemate Uni (GB) (More Than Ready) in last year's GI Breeders' Cup Mile–most recently finished third in the Shoemaker Mile. Throwing in an interesting twist is the Classic-winning War of Will (War Front). Trained by Mark Casse, the annexed the GIII Lecomte S. and GII Risen S. at the Fair Grounds last winter before going on to take the GI Preakness S. later that spring. On the board in one of four starts after that effort, recorded in the GI Pennsylvania Derby, the Gary Barber-owned colt returned in 2020 with a fifth-place finish in the Shoemaker Mile.