Battaash Brilliant In the King’s Stand 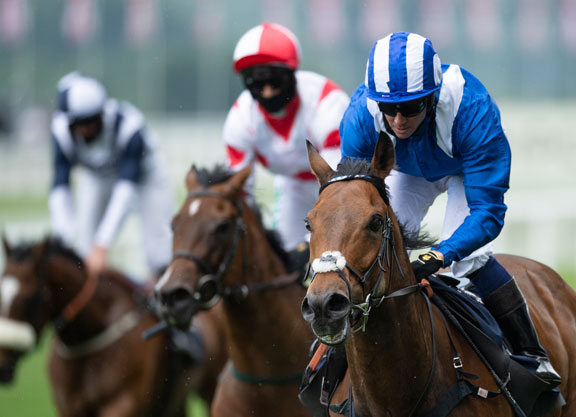 Twice cruelly denied by his nemesis Blue Point (Ire) (Shamardal) in the last two runnings of the G1 King’s Stand S., Battaash (Ire) (Dark Angel {Ire}) was on Tuesday the undisputed ruler of Royal Ascot’s five-furlong strip of verdant racing ground to provide the opener’s undisputed highlight. Out of the first four for only the second time in his career when last seen trailing in the G1 Prix de l’Abbaye de Longchamp, Shadwell’s 6-year-old may have had a slight question mark over his head as he exited the stalls but within a furlong all doubt was firmly cast. Jim Crowley’s main task where this particular customer is concerned has always been to hold on and by halfway the writing was once again already on the wall for all who had dared to dream he might have one of his rare off-days. Pursuit was merely futile by the furlong pole, with the 5-6 favourite having opened up and at the line there was a comfortable 2 1/4-length margin back to his stablemate Equilateral (GB) (Equiano {Fr}), with a short head back to Liberty Beach (GB) (Cable Bay {Ire}) in third. His victory was one of three on the opening day card for Sheikh Hamdan’s Shadwell operation.

“He was on a bit of a going day and wanting to charge off, so my only concern was to try to get the fractions right on him because he was quite keen,” man-of-the-day Jim Crowley commented. “There was nothing quick enough to lead him and I wanted to save enough for the finish, which worked out. Every time he wins it feels special, he’s a real superstar and hopefully we’re not finished yet. He was really good going down to the start, but when those gates opened he was gone. He is just such a naturally fast horse, it’s hard to find anything quick enough to lead him. He has got better as time has gone on–obviously two years ago at York, he completely blew his lid before the race and I think not having the crowd did help today.”

The winning time of 58.64 narrowly missed last year’s and was half a second off the 2018 renewal staged on a slicker good-to-firm surface, demonstrating that Battaash is indeed as good as ever. Having buried a hoodoo when winning last year’s G1 Nunthorpe S. also at the third attempt, the 2017 Abbaye hero now has the well-deserved clean sweep of Europe’s group 1 five-furlong sprints. Charlie Hills, who was stamping this edition, is relishing going back to Goodwood for the G2 King George S. that he has proven so categorically unbeatable in. “Obviously, we will have to speak with Sheikh Hamdan, but I am really looking forward to going back to Goodwood to try and win the King George there for the fourth time–I think that would be some achievement to do that,” he said. “It is a real shame that Sheikh Hamdan is not here to witness it, but it’s great to finally win a King’s Stand with him.”

“He was really on his ‘A’ game today,” Hills added. “He was beautifully relaxed before the race and as soon as the gates opened you could see he was going to be very hard to beat. He has been quite relaxed in his work at home, until Saturday when Jane rode him and he was really quite strong in the first half of the gallop. I think he’d got to the point really when we needed to get a race into him. The race will do him the world of good, we can train him off today. I’ve lived every emotion with him now. We have been beaten here twice before and, had it been three times, I don’t think I could have dealt with that. We always think his ace card from the two to the one-furlong pole is that he can get horses off the bridle and he gets them all going whilst he is still cruising.”

Hills also had praise for Battaash’s popular groom Bob Grace, who was leading up his first Royal Ascot winner. “Bob probably gets a stride slower every year, but the horse now goes at the same pace that he does,” he joked. “It is amazing the connection the two have. He might be one of the fastest horses in the world, but he walks so slowly.” Of the runner-up, he said, “Equilateral has run brilliantly and I always thought he was going to run a really big race. He has always shown that he is a really good horse. I know a lot of people has lost a lot of money on him over the years. He deserves to win a big one in time, but he hasn’t even won a group race yet so we’ll try and find one for him somewhere if we can.”

Battaash’s top speed was 43.4 mph, with his first and last furlongs being the fastest of the field, while Equilateral’s last three furlongs were finished off in 33.8 seconds which made them the quickest.

Battaash is the first foal out of Anna Law (Ire) (Lawman {Fr}), a half-sister to four black-type performers including this Stud’s smart Etlaala (GB) (Selkirk) who captured the G2 Champagne S. and was third in the G1 July Cup. Her other half-sibling Bird Key (GB) (Cadeaux Genereux {GB}) produced another leading sprinter for the operation in the G2 Duke of York S. winner and G1 Diamond Jubilee S. and G1 QIPCO British Champions Sprint S.-placed Tasleet (GB) (Showcasing {GB}). Anna Law also has Phoenix Thoroughbreds’ unraced 3-year-old filly Valletta Gold (Ire) (Gutaifan {Ire}) who is in training with John Quinn, and the 2-year-old full-sister to Battaash who was bought by Shadwell for 800,000gns at last year’s Tattersalls October Yearling Sale Book 1. She is named Altaayshah (Ire).