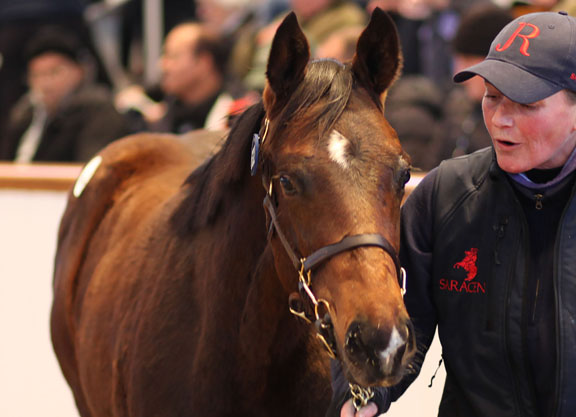 NEWMARKET, UK—Juddmonte’s Bated Breath (GB) often has to play second or third fiddle to his more celebrated stud-mates Frankel (GB) and Kingman (GB) but the limelight was all his on Thursday when his colt out of the Proud Citizen mare Unnatural headed trade at Tattersalls at 185,000gns.

Bred by Laundry Cottage Stud’s Colin and Melba Bryce—who also bred popular French-based sire Wootton Bassett (GB)—and consigned on their behalf by Jamie Railton, the colt (lot 632) is from a family which featured prominently on the first day of the sale via the El Kabeir colt (326) who shared top billing. The latter’s third dam Sahara Star (GB) (Green Desert) features as the grandam of the Bated Breath colt and she is also the grandam of top-class sprinter Dream Ahead (Diktat {GB}).

Peter and Ross Doyle signed for the colt for pinhookers Brendan and Ger Morrin of Pier House Stud.

Railton indicated that the Bryces had originally planned to sell the colt as a yearling. He said, “He’s a lovely colt and physically really impressive so he looked such a good foal [sale] prospect.”

The mare’s first foal Grandscape (GB) (Lemon Drop Kid) was a winner for Ed Dunlop and her current yearling by Pride Of Dubai was sold for 14,000gns as a foal and was offered at the October Sale by Manister House Stud for young pinhooking syndicate Blind Leading The Blind, consisting of a number of Newmarket assistant trainers, vets and friends, for whom she returned a handsome profit when sold for 115,000gns.

A memorable year on the track for Bated Breath included the Royal Ascot winners Daahyeh (GB) and Space Traveller (GB).

Highland Fling
The brilliant Highland Reel (Ire) retired to Coolmore Stud with seven Group/Grade 1 victories to his name in Britain, America and Hong Kong and as his first foals emerge in Europe, several members of his first crop appeared near the top of the board at Tattersalls on Thursday.

Jersey-based breeder Bunny Roberts boards the Medicean (GB) mare Self Centred (GB) at Newsells Park Stud, which sold her colt foal (lot 722) by the young son of Galileo (Ire) for 150,000gns to Bertrand Le Metayer. The half-brother to Aqueduct listed winner Feel Glorious (GB) (Bated Breath {GB}) was purchased to race for a partnership in France.

“It’s early days but we will see how he gets on,” said the agent. “It was hard not to be hugely impressed by Highland Reel as a racehorse and this is a good-walking colt who had everything going for him.”

Julian Dollar of Newsells Park Stud added, “He’s been very busy but he was a true pro. He’s a terrific advertisement for his young sire.”

Three lots later (725) Luke Barry went to 60,000gns for another Highland Reel colt from Castletown Stud and bred by Lech Breeding Ltd. He is the second foal for his winning dam Wholesome (Lemon Drop Kid), whose juvenile half-brother Three Technique (Mr Speaker) provided an update for the family recently with his second victory at Aqueduct and looks to be heading for the 2020 Kentucky Derby trail.

Six Highland Reel foals have sold so far this week for an average of 59,667gns.

Smart Return For Postponed Colt
The first foal by Postponed through the ring (lot 545) wasted no time in advertising the merits of his young sire when bringing the hammer down at 150,000gns in favour of Gay and Annette O’Callaghan’s Yeomanstown Stud. His dam Shemya (Fr), a winning daughter of Dansili (GB) has already provided breeders Michael and Giles Wates of Langton Stud with three previous six-figure sales offspring, including Cormorant (Ire) (Kingman {GB}), who sold for 135,000gns as a foal and 1.05 million gns when reoffered as a yearling. From an Aga Khan family, the mare, a daughter of dual Group 3 winner Shemima (GB) (Dalakhani {Ire}), was bought by the Wates family in France five years ago and she is set to return there next year to visit Wootton Bassett (GB) at Haras d’Etreham.

“We decided on Postponed as he was a pretty good son of Dubawi,” said Giles Wates.

“This foal has been busy ever since he arrived and he took it all in his stride.”

Another member of the O’Callaghan clan, Guy, who operates under the Grangemore Stud banner— signed for the most expensive Showcasing (GB) foal of the day, lot 710, at 125,000gns, while his fellow pinhooker Ciaran ‘Flash’ Conroy, was another to commit to the stallion, buying lot 590 for 90,000gns. Both colts were bred and consigned by Whitsbury Manor Stud, which is home to Showcasing.

Iffraaj Colt To Paca Paca
Whitsbury Manor Stud is currently the leading vendor at the sale and another of its graduates was top of the list of purchases for Harry Sweeney, visiting from Japan. The Irish expat has bought eight foals this week in the name of his Paca Paca Farm in Hokkaido and is the second leading buyer at the sale so far.

Lot 727, bought for 125,000gns, hails from a family which has been cultivated by the Harpers at the Hampshire nursery for several generations. The Iffraaj (GB) colt’s

Updates Galore For Jawlaat
McCracken Farms bought the Shamardal mare Jawlaat (Ire) as an unraced 3-year-old from the Shadwell draft of the 2016 Tattersalls February Sale for 18,000gns. The following season her half-sister Tantheem (GB) (Teofilo {Ire}) won the G3 Prix de Cabourg for Sheikh Hamdan and she backed that up with a further two Group 3 victories this season, while another half-sister, juvenile Khayzaraan (GB) (Kingman {GB}), looked impressive in two wide-margin victories in France this year for Freddy Head.

That prevalence of recent French form may well have been a spur for Hubert Honoré, buyer of Jawlaat’s strong colt by freshman Ribchester (Ire), who became the most expensive foal by his sire to sell so far when knocked down at 145,000gns.

“He is a pinhook prospect and will come back to my farm for the winter and spring and might be resold here or in France,” said the Normandy-based buyer after signing for lot 759. “He is a well-balanced foal with a good shape to him.”

As well as the performances of her half-siblings, Jawlaat’s page has also been boosted since her purchase by her dam’s half-brother Motamarris (Ire) (Le Havre {Ire}), a treble winner who was third in this year’s G1 Prix du Jockey Club.

Father and Son Lead Tatts Sires
The first of five weanlings from the debut crop of French champion Almanzor (Fr) took an early lead as the second session of foals got underway on Thursday. The daughter of Plume Rose (GB) (Marchand De Sable) became the first six-figure lot (524) of the sale at 125,000gns and was bought by the successful pinhooking team at the Egan family’s Corduff Stud. Their agent Richard Brown was familiar with the family having bought the mare for Simon Sweeting of Overbury Stud.

“I bought her carrying this foal for €55,000,” Brown said. “It’s a family I know very well—I bought her 2016 Sea The Stars (Ire) colt Desert Icon (Fr) for Sheikh Juma. We really believe that he is smart and can be a proper horse next year.”

Later in the session a colt by Almanzor’s sire Wootton Bassett (GB) (lot 780) continued Overbury Stud’s good day when selling for 130,000gns to Peter Doyle. His dam Jeu De Plume (Ire) (Montjeu {Ire}) was another 2018 Arqana purchase by Brown for Sweeting, bought for €95,000 carrying this colt. Already the dam of winners at the time, her 3-year-old Jeck Yeah (Fr) (Makfi {GB}) won twice in France this season. The 12-year-old mare is a half-sister to five black-type winners including the G3 Kilternan S. winner Hearthstead Maison (Ire) (Peintre Celebre).

With nine foals sold for 410,500gns, Overbury Stud is third on the consignors’ table for the sale after two days.

Sweeting, who was announced as the new chairman of the British EBF on Thursday, said, “It has been an amazing day. Richard Brown bought both mares while I was in church for my children’s carol service.”

Another decent result for Wootton Bassett came with a colt from Almanzor’s family, who was a rare non-pinhook of the day when sold to Joe Foley for 135,000gns.

“We bought a yearling by Wootton Bassett at Goffs and we like him a lot. I’m a bog fan of the stallion,” said Foley after signing for lot 700. “This is a gorgeous, well-balanced colt. Almaznor is in the family and also [G3 Round Tower S. runner-up] Guildsman (Fr), who is by the same sire and very similar in type. We’ll take him back to Ballyhane Stud. He’s been bought to race.”

Bred by Emma Capon and consigned by New England Stud, the colt is the second foal of Dazzling Rose (GB) (Raven’s Pass) whose dam is a half-sister to the dams of both Almanzor and Guildsman.

Wootton Bassett is the leading sire at Tattersalls with three weanlings sold for an average of 116,667gns, while Almanzor has had eight sold for 83,750gns to make him the leading freshman.

Trickledown Doubles Up
A pair of colts by perennially popular proven sires Acclamation (GB) and Kodiac (GB) fetched six-figure sums within minutes each other, both sold from the Trickledown Stud draft. Lot 691, the Chris Mills-bred full-brother to listed Ripon Champion 2YO Trophy S. winner Enjazaat (GB) (Acclamation {GB}) was added to the select bunch of pinhooked foals for Philipp and Marion Stauffenberg at 120,000gns, while Angus Gold signed for lot 693, the Kodiac half-brother to another listed winner, Fashion Queen (GB) (Aqlaam {GB}) at 100,000gns. The new Shadwell recruit is out of a Shamardal half-sister to group winners Wunders Dream (Ire) (Averti {GB}) and Grecian Dancer (GB) (Dansili {GB}) and was bred by Bolton Grange.

A former member of the Curragh Bloodstock Agency, Minton sent up David Minton Bloodstock in Newmarket in 1985 before forming Highflyer Bloodstock with Anthony Bromley and Bernice Emanuel in 2001. A familiar and popular face on the National Hunt circuit, his long list of top-class purchases runs to the dual Champion Hurdle winner Comedy Of Errors (GB), Cheltenham Gold Cup winner Long Run (Fr), Champion Chaser Sprinter Sacre (Fr) and one of the current stars of the jumping game, Altior (Ire).

“I first me David when he joined the Curragh Bloodstock Agency in Newmarket in 1970,” said Howson. “I have always admired his talent in establishing a wonderful client base and sourcing so many top-class winners. The winner’s enclosure at the Cheltenham and Aintree Festivals is synonymous with David Minton and Highflyer Bloodstock.”

He added, “Probably what I admire most in David is his boundless—probably the wrong word in view of his current knee problem—and infectious enthusiasm after almost 50 years in the game. David is greatly respected within the profession and among so many within the bloodstock and racing industry on both sides of the Irish Sea.”