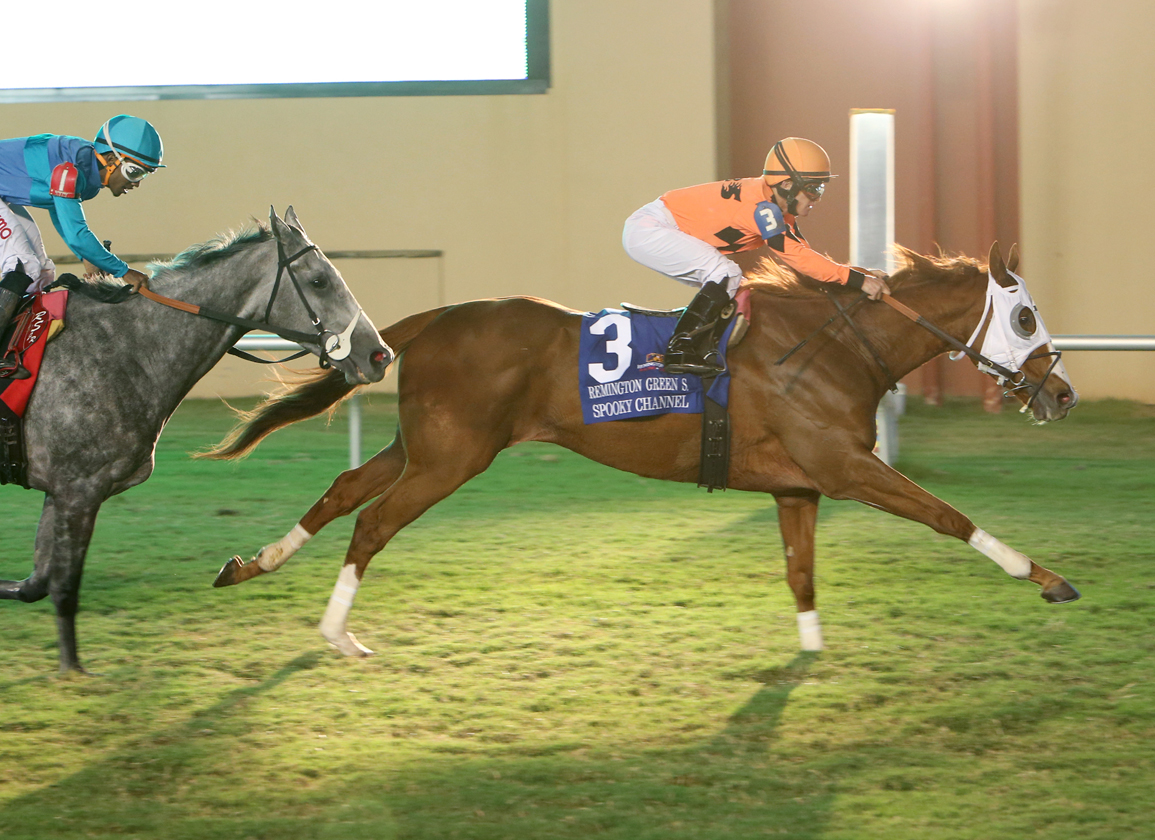 John Ballantyne, a transplanted New Zealander living in Fargo, North Dakota, has big plans for the NBS Stables he operates along with partners Art Neuhedel and Daryl Shaw. To that end, the co-founder of the biotech company Aldevron was busy bidding online during the recent Keeneland September Yearling Sale, virtually signing the ticket on five yearlings for a total of $1.14 million before the stable capped its month with a stakes win at Remington Park last Sunday.

Ballantyne traces his love of horse racing back to his childhood.

“Some of my earliest memories are of my grandmother listening on the radio to races,” he recalled. “She had a little phone account–which was state of the art back then–with the TAB and she called up and put a dollar each way on certain horses. I grew up in an area where there were a lot of good Standardbreds. Probably one of the greatest of all time, Luxury Liner, was owned by some people who were in the town I grew up in. So I was around that and I spent a lot of time out on the beach fishing when I was a kid and the Standardbreds and the Thoroughbreds and even the Greyhounds would use the beach to train on in the morning.”

His love of the sport was solidified by a fortuitous bet on the 1986 G1 Melbourne Cup.

“When I was 14 or 15, one of my cricket coaches loved betting on horses and I asked him to put $5 on the horse that he liked in the Melbourne Cup that year,” he said. “And he did. It was At Talaq and he won. He didn't pay a lot, but after that I was hooked. When I went to University, I was right next to a huge racetrack and fell in with a few other guys who were interested as well and we spent a lot of time looking at out Turf Digest and Best Bets magazine and really it progressed from there.”

Ballantyne was completing his graduate work in pharmacy at North Dakota State University in 1998 when he and Michael Chambers founded Aldevron. And it was in the U.S. that he first became involved in racing ownership.

“The very first horses I was ever involved with was with some Standardbreds,” Ballantyne said. “There was a group called Stake Your Claim Stables and I got involved there and had a few nice ones.”

He also became involved in the West Point Thoroughbreds partnerships, but it was another partnership group which eventually became NBS Stable.

“Before I was involved with West Point, I was involved with Art Neuhedel, who is the 'N' of NBS Stables and he had Public Stables LLC,” Ballantyne said. “There were a bunch of us that went in on some horses in that. Over time, it just winnowed down to just myself, Art and another guy called Daryl Shaw, who is the 'S' of NBS. We picked up the slack and kept going.”

He continued, “I have done very well in business and science and I wanted to start getting more and more involved and go after a different class of horse. Between NBS and West Point, I think I am involved in something like 55 horses now.”

Ballantyne's dream for his racing partnership has expanded as his success in the business sector has increased.

“As I became more affluent, I wanted to really turn it from my own hubris of wanting to have nice horses and the thrill and enjoyment I get out of racing and the sales process and start turning it into a stand-alone viable entity over the course of the next few years, which is what my goal is.”

NBS Stable's interests, which also include a majority interest in the Iowa-based stallion Timeline, are expected to include more breeding and selling in the future.

“I want us to be an operation where perhaps we become a niche seller at the yearling and 2-year-old sales,” Ballantyne said. “I will always be dipping in and buying as well. I think if we were rocking along with maybe a dozen mares and eight to 10 yearlings every year, six or seven 2-year-olds and five or six older horses. I think that's probably where we'd go, but those numbers may go up. It all depends. But I am interested in all  aspects of the industry. I am going to have more time in the relative near future to spend on this and be a bit more strategic perhaps. That's the goal.”

Heading into the sales, Ballantyne focuses on pedigree, while relying on his team on the grounds to relay back information on the individuals on his short list.

“There are Captain Obvious types in there, you see an Into Mischief or a Tapit, you know you are going to be bidding against people chasing the name,” he said. “Inasmuch as the syndicates–this is nothing against them, this is their MO, it's how they operate–but if you are spending $1.5 million on a horse and then franchising it out for 2 1/2 times the price within 48 hours, that $1.5 million is the best money you could spend. I understand the Quality Road and Uncle Mos–the ones that have absolutely proven themselves–are going to draw a lot of attention. So I end up getting into those type of horses with West Point to help mitigate some of the risks and because they are very astute. I've known Terry [Finley] and Jeff [Lifson] and all of those guys for a long time now. And they know me and they know what I like.”

Ballantyne is more cautious on sire power when purchasing for the NBS partnership.

“If you are buying to race for yourself, you have to look at what I think are the inflated PE ratios of yearlings and 2-year-olds relative to their potential future earnings,” he said. “I care more about winner circle photos than money, frankly, at this point in my life. But I am also a business guy and that is why I want to have a vision towards a sustainable thing.”

That focus on the bottom line has led Ballantyne to find value in younger stallions. His biggest purchase at the Keeneland September sale was a colt from the first crop of Army Mule (hip 2201) purchased for $390,000.

“I think Army Mule has every right to be a good sire,” Ballantyne said. “His progeny looked pretty good at Keeneland. So I kind of really wanted that one. The bit was in the teeth–no pun intended. I would have just kept going there.”

The colt is out of the unplaced August Snow (Tapit), who is a half-sister to multiple Grade I winners Hoppertunity (Any Given Saturday) and Executiveprivilege (First Samurai).

“When I look at the dam side, I spend a lot of time looking at the dams of dams–a big percentage of the blood is coming from that side as well,” Ballantyne said. “I think that with the absolutely brilliant mares, the likelihood that they are going to be the equivalent of Into Mischief and throw horses that are better than they were is pretty low. So I am looking for mares that were durable in their career. And of course, if you have a mare who is throwing runners with two or three different sires, chances are that's on her. So I really look at that. I probably spend more time looking at that then anything.”

Ballantyne continued, “Obviously then we have a ton of bodies on the ground. There are a bunch of trainers that I trust, although trying to get three or four trainers to agree on whether water is wet or not is a different story.”

Another young stallion who has impressed Ballantyne is Mo Town. He purchased a colt (hip 157) by the Coolmore stallion for $300,000 at the Fasig-Tipton Saratoga sale in August. And he was an underbidder on the colt (hip 2242) by the stallion who sold for $450,000 to trainer Tom Amoss at Keeneland September.

“I actually hit the bid button right when they closed it out,” Ballantyne said of missing out on that session-topping yearling. “I have a feeling the other party would have kept going.”

Ballantyne has made good use of the newly offered option of bidding on the internet, although it has caused the odd misadventure.

“I do most of my bidding while I am on conference calls,” he explained. “When I got that Twirling Candy filly, I was in the middle of a conference call with a group and I had it muted, but when I hit the bid button, the damn sound came back on again and everyone was starting, looking around.”

“But I love it. I absolutely love it,” Ballantyne said of internet bidding. “Every now and then, of course because I'm technically supposed to be working, there is a bit of bandwidth issue. There is probably still maybe a 10th of a second lag. Which is why they got that Mo Town colt for $450,000 and not $500,000. And whether it's Keeneland, OBS, or Fasig, the interfaces are great. It would be nice if the volume button didn't come on when you bid. But I think it's very smooth.”

Bidding from his office in Fargo, Ballantyne imagines the end-users and pinhookers he is competing with.

After 27 winters in North Dakota, Ballantyne is contemplating a semi-retirement in warmer climes and plenty of horse racing, while still making use of his background in science to support the sport he loves.

“My semi-retirement is going to include a lot of fishing and a lot of going to horse races,” he said. “I am planning on being down in Florida. My plan is to obviously to get to more races and I will have the time and the resources to do that a little more. I am not going to rely on it for a living, I will tell you that. But I am very interested in all elements of the game.”

As an example he said, “I have the wherewithal and the knowledge and the Rolodex that I will be able to get a fully functional equine herpes vaccine made. I am kind of starting a planning process of what that looks like now. And the technology is there now to come up with far better vaccines than those that exist. And I'm interested in the Permanently Disabled Jockeys Fund  and Old Friends and places like that. I would like to spend time working with them on some stuff.”

Of the day when he can spend much of his time bidding in person instead of online during conference calls, Ballantyne said, “Not too much longer. Hopefully. I am going to show up at a sale and I'm probably going to get attacked by a pinhooker. But I do when I have the time, I really do want to spend it at the sales and raise the pedal, as it were, and see some of the characters there.”