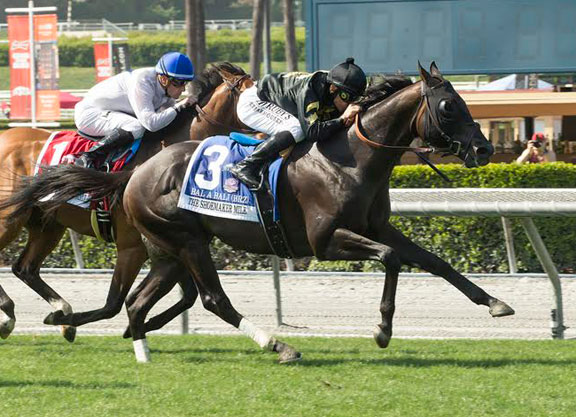 Imported into this country with the highest of hopes as Brazil's horse of the year and champion 3-year-old, Bal a Bali overcame a well-documented bout with laminitis and shaped as one of this country's top milers not so long ago while owned by Rick Porter's Fox Hill Farms and Anthony Manganaro's Siena Farm. Off form for the better part of 18 months and nearly retired, the Southern Hemisphere 6-year-old seems to have rediscovered his best and earned his second U.S. top-level score in the Shoemaker Mile Saturday afternoon while earning an automatic bid to the GI Breeders' Cup Mile later this year at Del Mar.

The connections of Bal a Bali would have loved the potential shape of the Shoemaker on paper with the speedy Heart to Heart and What a View (Vronsky) signed on, and that expected pace duel materialized as Bal a Bali settled in fifth and with plenty of running room through an opening half-mile that went in a taxing :45.07. Heart to Heart, dangerous when left to his own devices, but susceptible when taken on, did manage to put away What a View outside the quarter pole, but it was at that point that Mike Smith had Bal a Bali in full gear. Heart to Heart was trying hard up front, but those early fractions began to take their toll and Bal a Bali reeled him in methodically inside the final 70 yards. Farhaan closed off nicely from last to grab second on the wire.

Fifth in this race two years ago, Bal a Bali was an allowance winner that October, but did not win again for 19 months until knocking out What a View on the wire in the Mar. 11 GI Kilroe Mile S. under a perfect ride from Javier Castellano, who went on to win the GI Santa Anita H. with Shaman Ghost (Ghostzapper) later that afternoon. Bal a Bali was exiting a fifth behind Divisidero (Kitten's Joy) in the GI Woodford Reserve Turf Classic over a stamina-testing nine furlongs on Derby Day May 6.

“He's had some problems in his life and he's had some nice owners, some of the best in the business, that have been willing to let me do what's right by him,” said Richard Mandella, who was fittingly winning the other Santa Anita feature on a day when the GI Beholder Mile was held. “The fruits of that are what you saw.”

He added, “It's very gratifying but you expect him to win every time because he's a great horse. He's had a few things that didn't materialize, but with the setbacks that he's had… the industry needs to give him the credit due that he overcame it and came back to be such a good horse.