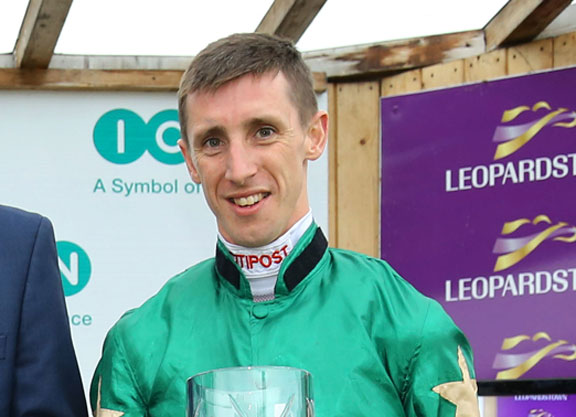 There was an unfortunate incident at St Moritz on Sunday when British jockey George Baker was airlifted to hospital following a fall from the Jamie Osborne trained Boomerang Bob (Ire) (Aussie Rules) in the opening race. Baker, who had his finest hour last September when guiding Harbour Law (GB) (Lawman {Fr}) to victory in the G1 Ladbrokes St Leger at Doncaster was apparently knocked unconscious when brought down in a three horse melee that unfortunately lead to his mount Boomerang Bob being put down. Baker was flown to a trauma hospital 100km away in Chur and the rest of the meeting was abandoned. St Moritz press officer Claudia Grasern-Woehrle said, “We've had a bad accident in the first race. The jockey George Baker was brought down. Unfortunately his horse died and the jockey has been airlifted to hospital. We checked the track following the incident and we have found a hole in it, which means we have had to cancel the rest of the meeting as safety comes first.”

Baker's agent, Guy Jewell, provided a positive update on the jockey later in the day. “George has woken up, and with the hospital releasing that news I can only imagine they are pleased with his progress,” he said. “He'd already had a CT scan and that has come back clear.

They will obviously need to check that everything is working properly and his wife is on her way out there.”

Christophe Soumillon also rode in the race and speaking to French Racing Channel Equidia he said, “It was the first race and there were only nine runners. Turning into the straight the snow was only up to the horses' shoes. You could see by the prints afterwards that there was water between the ice and the snow.

It could be because of the temperature which is in positive figures, though I don't have much to compare it with as I have not ridden here before.”

Following further track inspections by St Moritz officials the management released a statement saying that, “a crack in the ice had occurred on the inner rails in the direction of the racetrack, some 150m from the finishing line.” This meant that water had risen up towards the surface thus undermining the racing surface and leaving it unfit for use.