Baffert Tells Fox: “We Did Not Cheat” 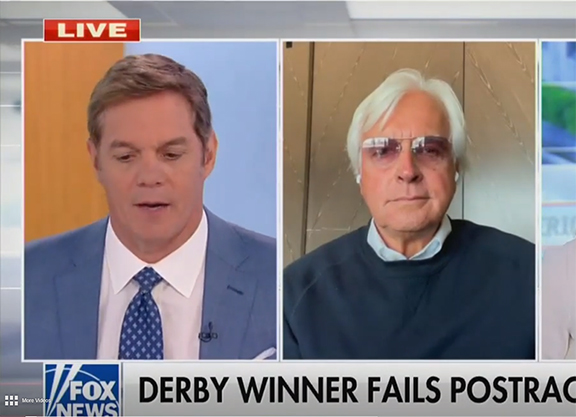 Embattled trainer Bob Baffert took his fight to clear his name to a national audience Monday, appearing on the Fox News show “America's Newsroom” where he once again emphatically denied any wrongdoing in the case of Medina Spirit (Protonico). Pressed on the issue by co-host Bill Hemmer, Baffert doubled down on denials he made Sunday, saying, “We did not cheat to win the Kentucky Derby.”

Baffert has found himself in the cross hairs of one of the biggest scandals ever to hit horse racing and the GI Kentucky Derby. The story exploded Sunday morning when Baffert hastily called a press conference at Churchill Downs to inform the media that the he had ben notified by the Kentucky Racing Commission that Medina Spirit tested positive for the corticosteroid betamethasone. The betamethasone finding, if confirmed by a split sample, will be Baffert's fifth positive test for a regulated but prohibited-on-race-day drug within the past year. In every instance, he has denied any wrongdoing.

As he did Sunday, Baffert made the case to the Fox audience that the problem was not with him or his stable but with a drug testing system that is so precise it can find minuscule trace amounts of therapeutic drugs that are not known to be performance-enhancers.

“What's happening is they're testing at these picogram levels,” Baffert said. “America doesn't know about picograms. It's like a salt grain in an Olympic size pool. He had 21 picograms, which has no effect at all. The thing is, a few years ago this never would have been called. In California, they never would have called this a positive. They shouldn't have called it a positive. We're living in a new world. These horses don't live in a bubble. They are out in the open, people are touching them. After the Derby, everybody was up there touching him. There are so many ways these horses can get contaminated. They're testing at these ridiculously low levels. I've been saying for over a year now, this is going to get innocent people in trouble. This is what has happened now.”

Baffert has maintained all along that Medina Spirit has never been given betamethasone.

“This did not happen,” he said. “This horse has never been treated with that. Actually, it's a legal therapeutic medicine and the amount (found in the post-race drug test) wouldn't have any effect on the horse anyway. That horse was never treated with that and so that's the disturbing part of it. I never thought I'd have to be fighting for my reputation and this poor horse's reputation because of the new regulations. They are testing these horse at contaminated levels. It's been a horrible experience.”

Baffert told the Fox audience that there was no way he would have given this particular drug to a horse just prior to a race.

“Bob Baffert is not stupid,” he said. “That is not a drug that I would use on a horse. We don't use that drug. The horse never had that in him. We have the documentation. We're going to show everything.”

Baffert confirmed that Medina Spirit and stablemate Concert Tour (Street Sense) were on their way to Baltimore to prepare for the GI Preakness S. By early afternoon Monday, it was not clear if the Maryland Jockey Club would allow them to be entered or whether or not they could be entered under another trainer's name.

On Sunday, Churchill Downs issued a statement in which it said that Baffert had been suspended from entering any horses there during the remainder of the meet.

“I haven't heard anything officially,” he said of the Preakness. “They haven't told me anything. Churchill Downs came out with that statement and that was pretty harsh. We live in a different world. This America is different. This was a cancel culture kind of thing, We're prepared to run.”

Baffert said he realized that he is under a microscope and that the Medina Spirit positive could have lasting impact on his reputation.

“I want to protect my legacy,” he said. “I have trained great horses, the best horses that have run. My record has proven that. It's horrible that this has happened. This horse never got that medication. It's an injustice to the horse. He's a great horse. He ran hard and he deserved to win that race. It kills me. These horses are like my children.”