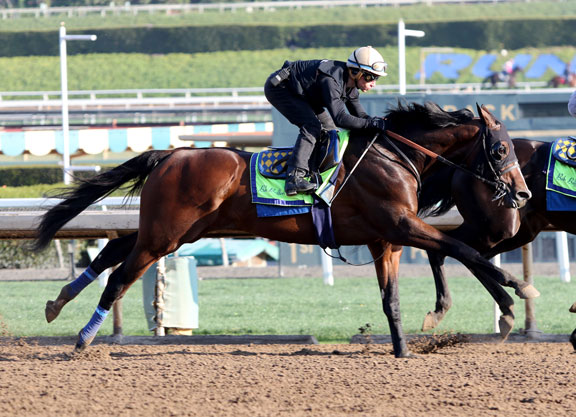 Following a disappointing spring which saw two top Bob Baffert trainees-Nadal (Blame) and Charlatan (Speightstown)-get bounced off the GI Kentucky Derby trail, the horseman emerges with a pair of live contenders in Saturday's GIII Los Alamitos Derby. The more accomplished of the two is Albaugh Family Stables and Spendthrift Farm's Thousand Words (Pioneerof the Nile), the winner of his first three starts, including last winter's GII Los Alamitos Futurity and the GIII Robert B. Lewis S. Feb. 1. After fading to fourth behind stablemate Authentic (Into Mischief) in the Mar. 7 GII San Felipe S., the Florida bred faltered at the start of a soggy renewal of the Oaklawn S. Apr. 11 and came home a well-beaten 11th as the 5-2 favorite. Flavien Prat, who was aboard for all three career wins, reunites with the colt, who sheds the blinkers in this return. Farther back on the experience spectrum, but seemingly not lacking in the talent department is stablemate Uncle Chuck (Uncle Mo). A front-running seven-length winner in his debut going a mile at Santa Anita June 12, the Watson, Pegram and Weitman colt has had a pair of maintenance breezes since that effort, including the most recent a six-furlong move in 1:12.4 June 28 (XBTV). Anneau d'Or (Medaglia d'Oro) showed promise at two, winning his debut at Golden Gates before finishing a close-up second in both the GI Breeders' Cup Juvenile and the Los Alamitos Futurity. Off the board in all three starts this seeason, including a fourth in the GI Santa Anita Derby June 6, the Peter Redekop owned colt will try to recapture some of his juvenile form while facing easier company.