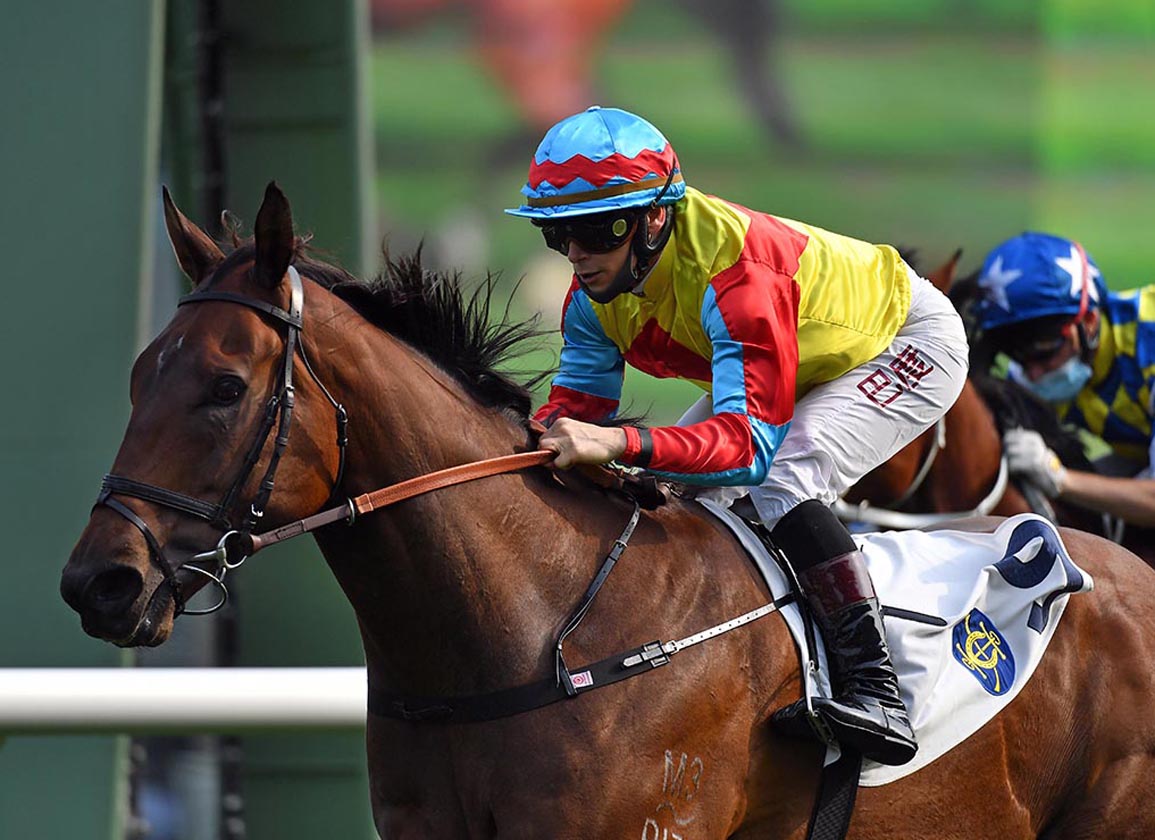 Frenchman Alexis Badel rode his first race in Hong Kong on a two-month contract on Longines Hong Kong International Races day Dec. 11, 2016 and earned his first local victory a little more than two weeks later, guiding Supreme Profit (Aus) (Encosta de Lago {Aus}) to a 24-1 upset of a 2000-metre Class 2 at Sha Tin for trainer Danny Shum, one of seven wins during that stint. Five years later, the former French champion apprentice will ride for much bigger stakes, with mounts in three of the four races that comprise the 2021 HKIR at Sha Tin on Sunday week.

Just 31 years of age, the son of trainer Myriam Bollack-Badel and former jockey Alain Badel rode his first winner at group level in France in 2013, scoring aboard Norse King (Fr) (Norse Dancer {Ire}) in the G3 Prix du Conseil for his mother. He served His Highness the Aga Khan as second-retained rider behind Christophe Soumillon at the outset of the 2015 season and finished in the top 10 in the French jockeys' premiership.

Badel returned to Hong Kong for the next two seasons, racking up a respectable 40 winners, while further honing his craft back at home, where he registered a maiden Group 1 success astride Nonza (Fr) (Zanzibari) in the Prix Jean Romanet. In his first full season in Hong Kong in 2020/2021, Badel booted home 58 winners–good for a share of fifth on the jockeys' premiership– winning at a strike rate of 9.32%, sixth-best among the locals. During that first full season in 2020/21, he partnered with Healthy Happy (Aus) (Zoustar {Aus}) to win the Hong Kong Classic Cup under a coy ride from the front and a first Hong Kong Group 1 badge courtesy of Wellington (Aus) (All Too Hard {Aus}) in the Chairman's Sprint Prize.

The latter, trained by Richard Gibson, gives Badel his best chance at HKIR success in next Sunday's G1 Longines Hong Kong Sprint, where he squares off with the likes of Japanese raiders Pixie Knight (Jpn) (Maurice {Jpn}) and Resistencia (Jpn) (Daiwa Major {Jpn}) as well as top locals Hot King Prawn (Aus) (Denman {Aus}) and the progressive Lucky Patch (NZ) (El Roca {Aus}). Badel put Wellington through his paces in a 1050-metre barrier trial over the Sha Tin all-weather track Friday morning, 'winning' the heat by a comfortable 3/4 of a length (video). Wellington missed an intended appearance in the G2 Premier Bowl H. Oct. 17, but was found to be lame, and resumed in the G2 Jockey Club Sprint Nov. 21, finishing seventh in a race he was certain to need.

“He gave me a good feel today as he was off the track for a long time, so he needed that first run to get him back to a better shape,” Badel told the HKJC notes team. “I'm expecting improvement from him, he trialled well and delivered a strong finish this morning. Hopefully he pulls up great, but he gave me a nice feel, he was strong and sharp so I'm very happy.”

He added, “We know he is a top horse in Hong Kong, we're just looking for some improvement following his first run–he should be back to a better shape now, so let's see on the big day what he can do.”

“It was much better today because last time he couldn't pass the trial naturally, so today he showed a very big improvement and that's very positive,” Badel told HKJC media.

And for the trainer that gave him a leg up on his first Hong Kong winner five Decembers ago, Badel will climb aboard the very honest Tourbillon Diamond (Aus) (Olympic Glory {Ire}) in the afternoon's richest event, the G1 Longines Hong Kong Cup (2000m), to which he was supplemented for HK$30,000. The gelding, formerly known as Eric the Eel, was a troubled third for Badel in last year's Hong Kong Classic Mile and he has been aboard in all four starts this term, including a short-head success under a feather-weight in the G3 Sa Sa Ladies' Purse H. (1800m) Nov. 7 (video).

“So far he's done well, I hope he can maintain his good form and we will see if it is good enough to win such a big race but he's been very consistent with good form recently, so if he can repeat that again then he should run well,” Badel said.

Before his busy Sunday, Badel will look to improve on his podium finish in last year's Longines International Jockeys' Championship at Happy Valley Dec. 8. He shared third with Hollie Doyle last year and joins Purton, Moreira and Vincent Ho as the local representatives. He has 19 wins from 158 rides this term and ranks third behind Purton and Moreira.

“It's fantastic, I was very keen to participate again and I was fighting very hard for my spot to compete in the IJC again,” Badel said. “Now I just hope I can pick up some good rides, it looks competitive, but it looks quite fair and I believe the competition will be very competitive and open.”