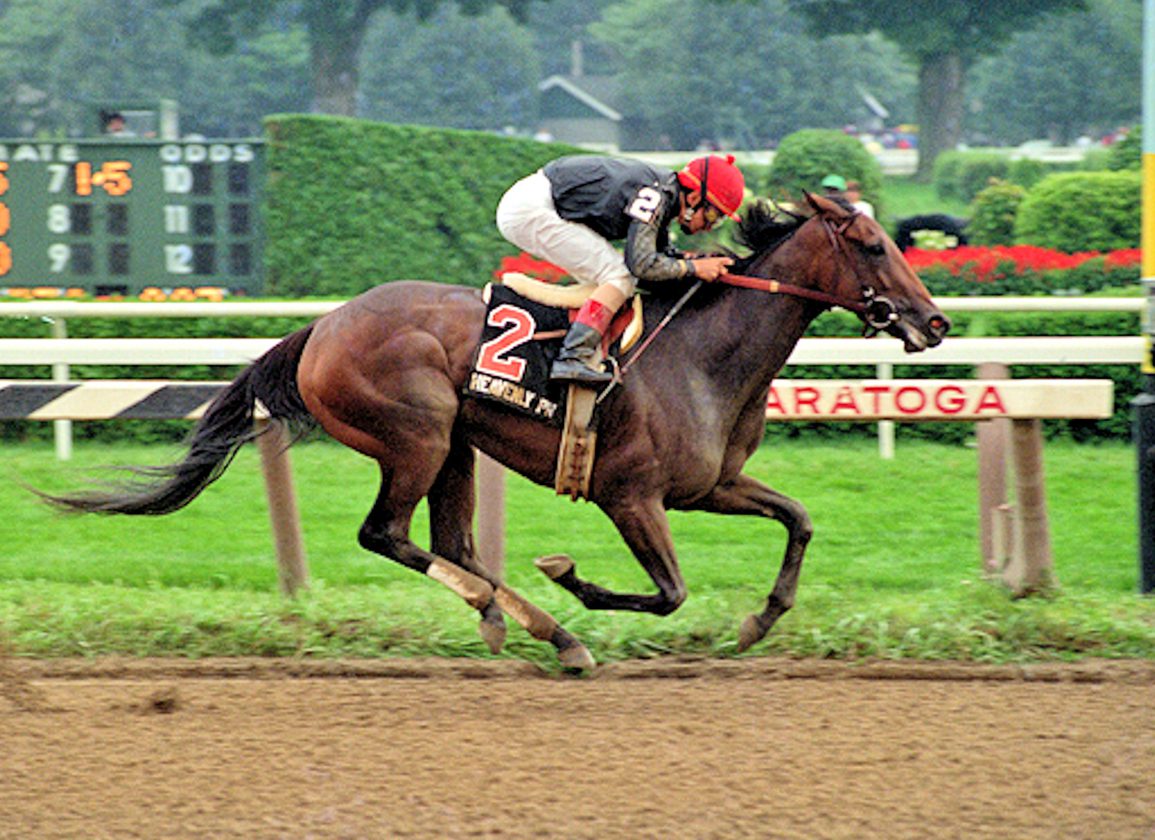 In this continuing series, we examine the past winners of significant filly/mare races by the lasting influence they've had on the breed. Up today is the GI Alabama S., one of the oldest stakes races in the country.

Dating to 1872, eight years after the first Travers S. was run and 12 years after the first Queen's Plate (the oldest stakes race in North America), the Alabama is the last leg in New York's Triple Tiara following the GI Acorn S. and the GI Coaching Club American Oaks. The major-league 3-year-old filly contest was run at different distances early, but has remained a constant at 1 1/4 miles since 1917. It's a safe bet anyone with a good sophomore filly would love few things more than adding the Alabama to their win column. As with most races this old, a few years were skipped owing to various circumstances, but history has recorded 141 individual winners of the Alabama. How have they fared as broodmares?

Several Alabama winners through the years also won the GI Test S., GI CCA Oaks, GI Diana S., or GIII Schuylerville S.; please see those previous profiles for notes on broodmare phenomenons Sky Beauty, November Snow, Tempted, Busanda, Vagrancy, and Cleopatra. Following are the some of the other most important Alabama winners by what impact they have had on the breed through their sons and daughters.

Pretty Discreet (1992, Private Account–Pretty Persuasive, by Believe It): Her three stakes winners were all colts–GISWs Discreet Cat and Discreetly Mine, as well as MSW & MGISP Pretty Wild–and her three daughters to stay in this country are all stakes producers. She is also the granddam of GISW Awesome Maria, who sold for $4 million at the 2013 Keeneland November sale, and June 9 Astoria S. winner Devious Dame, the first black-type winner for freshman sire Girvin.

Heavenly Prize (1991, Seeking the Gold–Oh What a Dance, by Nijinsky II): One would expect a mare descended from Blitey and Lady Pitt to do great things and Heavenly Prize held up her end of the bargain. Her sons included MGISW Good Reward and GSW Pure Prize, while her descendants thus far include GISWs Persistently, Queen Goddess, and Instilled Regard, plus GSW & MGISP Stays in Vegas.

Maplejinsky (1985, Nijinsky II–Gold Beauty, by Mr. Prospector): Her daughter, Sky Beauty, won the Alabama and the CCA Oaks in 1993, was named champion older mare in 1994, and captured a total of nine Grade I races before producing MGSW Hurricane Cat and a daughter who would later be granddam of GISW Violence. Maplejinsky didn't stop there. Other daughters and granddaughters have produced MGISWs Guarana, Point of Entry, Pine Island, and Tale of Ekati, as well as GI Breeders' Cup Distaff winner Pleasant Home and a slew of other high-quality stakes winners. Her great-granddaughter Magical World sold for $5.2 million at last year's Fasig-Tipton November sale, while Magical World's daughter Guarana brought $4.4 million at the same sale. 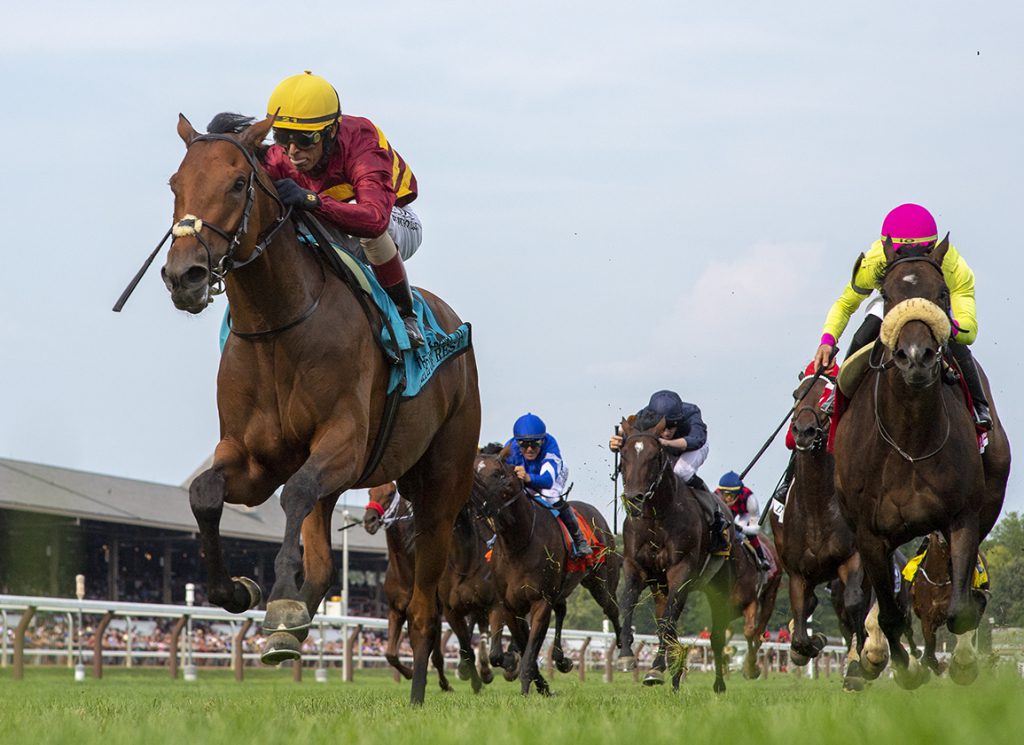 It's in the Air (1976, Mr. Prospector–A Wind Is Rising, by Francis S.): This mare, often remembered as her sire's first of many champions, has had some very significant activity among her female descendants in the last year. Her MGISW granddaughter, Music Note, produced the 2021 G1 Dubai World Cup winner Mystic Guide, while another unraced granddaughter is the dam of 2021 GI Saratoga Derby Invitational S. winner State of Rest (Ire), who is also a G1 winner in England, France, and Australia. Other GI/G1 winners produced by her daughters include Musical Chimes and Storming Home (GB).

Lauries Dancer (1968, Northern Dancer–Its Ann, by Royal Gem II {Aus}): Although she didn't produce a stakes winner, this Canadian Horse of Year's daughters and granddaughters have produced MGISWs Will's Way and Tizway, as well as GISW Willa On the Move, and GISP and excellent Maryland sire Citidancer.

Natashka (1963, Dedicate–Natasha, by Nasrullah {GB}): Named Broodmare of the Year in 1981, Natashka sports a long list of black-type winners tracing to her, including leading U.S. sire Elusive Quality and a number of champions.

High Bid (1956, To Market–Stepping Stone, by Princequillo {GB}): This Wheatley/Phipps mare is on this list for one very sound reason. Her first foal was Bold Bidder, not only a champion on the racetrack, but sire and broodmare sire of several luminaries. His two Kentucky Derby winners in a six-year span included one considered among the Top 10 runners of the 1900s: Horse of the Year Spectacular Bid.

Parlo (1951, Heliopolis {GB}–Fairy Palace, by Pilate): Her daughters included 1969 Broodmare of the Year All Beautiful, who produced Horse of the Year Arts and Letters and is great-granddam of dual champion and five-time GISW Silverbulletday.

Salaminia (1937, Man o' War–Alcibiades, by Supremus): A number of stakes winners trace to this daughter of Man o' War, none more notable than English Horse of the Year and excellent sire Sir Ivor. He lives on particularly through his daughters, although his sire son, Sir Tristram (Ire), redefined the breed in Australia and New Zealand.

Risque (1928, Stimulus–Risky, by Diadumenos {GB}): 1980 Broodmare of the Year Key Bridge traces to her, as does U.S. Horse of the Year Fort Marcy and Canadian Horses of the Year Izvestia and With Approval. Champion Key to the Mint, MGISW Touch Gold, and excellent European sire Wootton Bassett (GB) are just a few on the long list of other high-class descendants of Risque.

Malachite (1913, Rock Sand {GB}–Miss Hanover, by Hanover): A number of stakes performers trace to this mare, most importantly 1943 Horse of the Year and Triple Crown winner Count Fleet. He was ranked among the leading sires and broodmare sires in the country for many years.

Sallie McClelland (1888, Hindoo–Red and Blue, by Alarm): This wonderful producer of yesteryear is the dam of 1904 Kentucky Oaks winner Audience and ancestress of Horses of the Year Whisk Broom II and Crusader, as well as dual champion Top Flight.