Home » Archive » Shared News Europe » Back to the Roodee 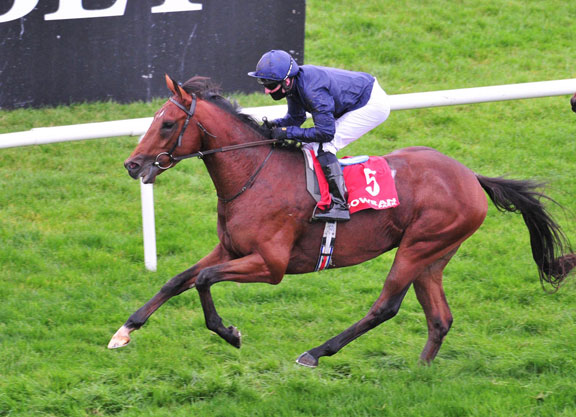 Chester's May meeting gets underway on Wednesday, with the G3 Chester Vase and Listed Weatherbys ePassport Cheshire Oaks offering the opportunity for Epsom hopefuls to enter the fray at the famous “Roodee”.

While neither has attracted a standout this year, the Derby and Oaks trials are at times fertile ground for the lesser-exposed types to flaunt their wares such as Godolphin's Wirko (Ger) (Kingman {GB}) in the Vase. Having already proven himself on Epsom's inimitable terrain when winning the Apr. 20 Listed Blue Riband Trial, the Charlie Appleby-trained bay could become a serious contender for the Classic on the first Saturday in June if he is able to back up that performance here. “He's got his golden ticket to Epsom, but firstly we want to give him some more experience and secondly, we hope the step up to a mile-and-a-half at Chester will see further improvement,” Appleby explained. “He did all his best work in the last couple of hundred yards at Epsom and he's a horse who we think, with his pedigree and the way he races, should be suited by a step up in trip. He's by Kingman, but he does have a German pedigree on the dam's side, so one would hope he'll be able to handle softer ground.”

With Chester being hit by 26mm of rain from Monday, the good-to-soft going description means that Aidan O'Brien has stripped his Vase team to one with the likely favourite Sir Lamorak (Ire) (Camelot {GB}) and his pacemaker San Martino (Ire) (The Gurkha {Ire}) being left at home. He still has the Apr. 15 G3 Craven S. sixth Sandhurst (Ire) (Galileo {Ire}) to attempt to stretch his tally to 10 in this extended 12-furlong prize, having won six of those in the last seven runnings. Godolphin also have the John and Thady Gosden-trained Apr. 9 Leicester novice scorer Law of the Sea (GB) (Golden Horn {GB}), whose stamina is assured unlike Michael Pescod's Listed Ascendant S. scorer Fancy Man (Ire) (Pride of Dubai {Aus}) who steps up markedly in trip having finished one place behind the re-opposing Youth Spirit (Ire) (Camelot {GB}) when fifth in the nine-furlong Listed Feilden S. at Newmarket Apr. 13.

“Law of the Sea has won well on his last two starts, firstly at Kempton and then at Leicester last time,” said trainer Thady Gosden. “He's a nice horse, who has already won over a mile-and-a-half, and he should handle the soft ground. It's a tough race, but hopefully he'll run well.”

In the Cheshire Oaks, Sheikh Hamdan bin Mohammed Al Maktoum's G2 May Hill S. and G3 Sweet Solera S. runner-up Dubai Fountain (Ire) (Teofilo {Ire}) sets a clear standard and probably only needs to repeat that form or that of her fourth in the G1 Fillies' Mile at Newmarket in October which is looking very strong now. Shadwell's unbeaten Zeyaadah (Ire) (Tamayuz {GB}) could be a major Oaks contender and the form of her 1 1/4-length defeat of Mystery Angel (Ire) (Kodi Bear {Ire}) in Newmarket's Listed Montrose Fillies' S. over a mile on heavy ground at Newmarket in October looks better now that the runner-up has won the Listed Pretty Polly S. “She's a nice, tough filly and she had a good year last year,” said Angus Gold. “She won on heavy ground at Newmarket and had to grind it out to do so. She's taken a bit of time to come to herself this spring. Roger [Varian] himself said we'll see her looking better than this, but she's done enough to start. Obviously the Oaks is approaching and we need to see if she's up to that class or not.”

One of the darker ones is Lord Lloyd-Webber's Darlectable You (GB) (Dubawi {Ire}), but the full-sister to Too Darn Hot (GB) has to improve markedly on her return second in a 10-furlong Newbury maiden Apr. 16. “She ran well at Newbury first time out this year,” commented Thady Gosden. “When she hit the front she just got a bit lonely, as you would expect. They've obviously had plenty of rain at Chester, which she will hopefully be able to handle. It's a good race with Mark Johnston's filly [Dubai Fountain], who was fourth in the Fillies' Mile, and Roger Varian's filly [Zeyaadah], who won the Montrose. It's a tough race, but our filly is in good form and hopefully she'll run well.”

At Gowran Park, last year's G1 Prix du Cadran heroine Princess Zoe (Ger) (Jukebox Jury {Ire}) looks to put a disappointing return effort behind her when ninth in the Listed Noblesse S. at Cork Apr.  3 as she tackles the 14-furlong Listed Irish Stallion Farms EBF Vintage Tipple. “I'm hoping that the ground stays yielding-to-soft and the extra two furlongs should make a difference as she's getting fitter all the time,” revealed trainer Tony Mullins. “This will be her last run before the Ascot Gold Cup and I'm hoping to see a big improvement from Cork. She's got to give away weight, but she's going to have to do that all the time now, apart from in Group 1s, and we can't avoid it. Gowran is our local track and the race is named after a horse my father trained to win a Classic, so it would be a lovely to win it.”

In the Listed Irish Stallion Farms EBF Victor McCalmont Memorial over an extended nine furlongs, Ballydoyle's Empress Josephine (Ire) (Galileo {Ire}) goes up in trip after going a shade too quick in front before fading to 10th in Leopardstown's seven-furlong G3 1000 Guineas Trial Apr. 11. The full-sister to Minding (Ire) encounters older fillies and mares including Moyglare Stud Farm's progressive Listed Trigo S. winner and G2 Blandford S. runner-up Amma Grace (Ire) (Galileo {Ire}) who as a full-sister to Search For a Song (Ire) and half to Free Eagle (Ire) (High Chaparral {Ire}) et al is a fascinating prospect as a 4-year-old.