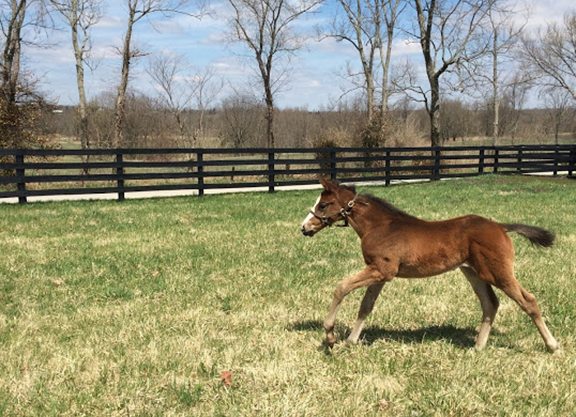 Bricks and Mortar as a foal at Stone Farm | Alberto Davalos

I know I shouldn't do it. Nothing good ever comes out of it, but I can't help myself sometimes: I read the comment sections on horse racing websites.

Typically, I have no proverbial horse in the race in regards to the arguments I read in almost every article. But recently I've felt my blood pressure rise and face begin to heat up when reading arguments about this year's Horse of the Year. We can all agree that Midnight Bisou (Midnight Lute), Mitole (Eskendereya), and Bricks and Mortar (Giant's Causeway) all had objectively wonderful years, but to me it's clear that Bricks and Mortar is the Horse of the Year. That said, it's not uncommon for me to yell at my computer screen and scoff whenever I see someone argue against my boy Bricks. But I know I'm biased–that's my baby you're talking about.

I was an intern at Stone Farm when Bricks and Mortar and I met on a foggy Kentucky morning in March, 2014. We met politely with a firm handshake as I pulled him out of his dam. A remarkably unremarkable delivery, Beyond the Waves '14 entered the world quietly and quickly. “Good morning, buddy” are the first words he ever heard.

Even if his foaling was unremarkable, he quickly set himself apart from his peers early on. I was astounded by his maturity and eagerness to please. Whereas other foals were an exercise in patience and horsemanship, Bricks and Mortar took to everything quickly. I remember always leaving Beyond the Waves and her colt towards the end when bringing in mares in the morning because I knew they wouldn't cause any trouble.

A few weeks into his life, Beyond the Waves required a small medical procedure done at the clinic so her foal was separated from the herd for a while. Because his dam required stall rest, Bricks got a lot of one-on-one time with me, an overly eager intern living his dream in the Bluegrass. After a few days of stall rest, Beyond the Waves graduated to hour-long stretches in a small paddock where she could hand-graze while her bouncing colt could stretch his legs. During these sessions I would brush Bricks and tell him about a horse from my home state who was on the Kentucky Derby trail.

“Ya know, California Chrome was on stall rest when he was a baby, too. Don't forget me when you're famous like him, bud.”

As he grew and developed from an impressive foal to a lanky weanling, he continued to impress me. I worked with over 40 foals that breeding season, including a tenacious (and STUBBORN) colt that would later be named Mastery, but Bricks was always my favorite.

He wasn't one to bully the other colts around or always be in front when they started to chase each other. What drew me to him was his quiet confidence. A level of maturity I hadn't seen in such a young horse before.

I moved back to California a few days after Bricks was weaned, a poetic way to end our time together. I made sure to keep track of my foals through the years and was surprised when he went for a “bargain” of $200,000 during Book 1 of Keeneland September.

“Wow, someone just got a steal,” I thought to myself.

Watching my favorite foal develop into the strong competitor he has become today has been a thrill. Watching him win the Breeders' Cup brought a literal tear to my eye.
He has made me so proud and I can only hope he keeps up his end of the promise and still remembers me.

Alberto Davalos completed the Spring 2014 session of the Kentucky Equine Management Internship at Stone Farm. He is now the Assistant Director of Admissions at the University of California, Berkeley. He keeps a photo of Bricks and Mortar at his desk.