Baaeed Brilliant In The International 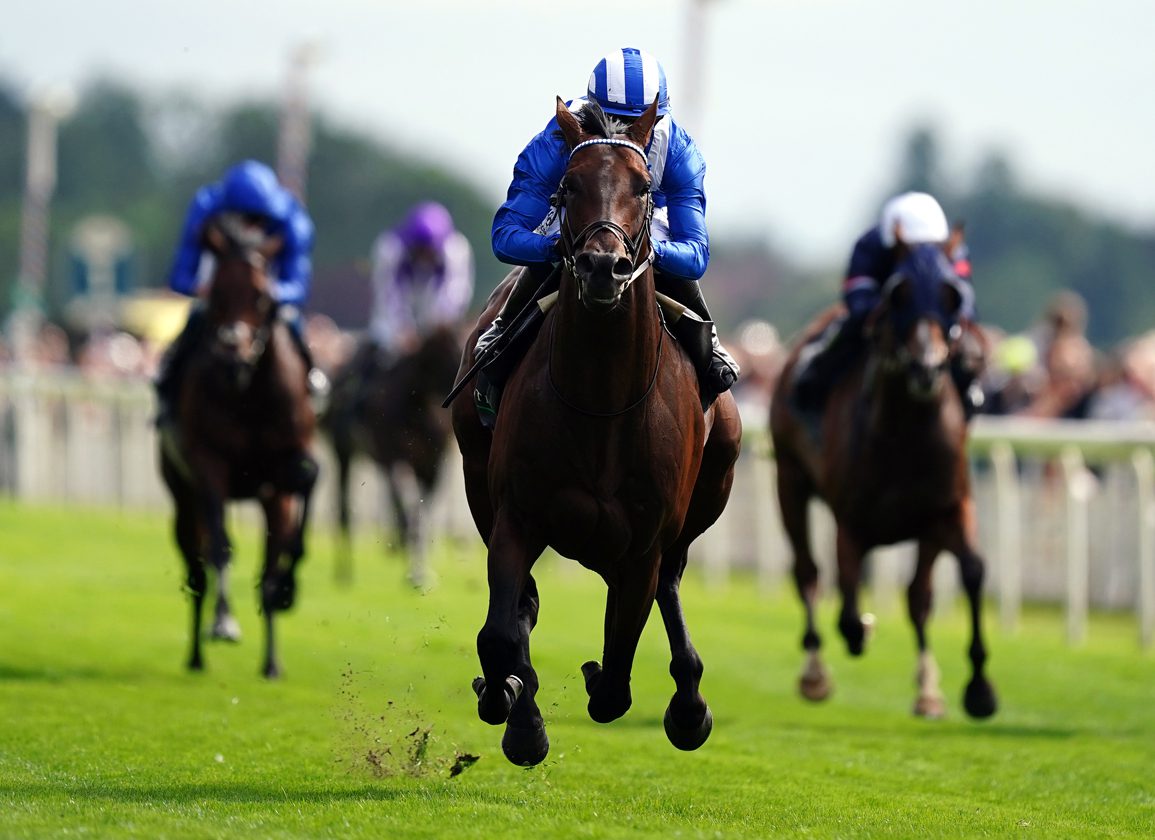 There was talk of stamina and wellbeing doubts ahead of Wednesday's G1 Juddmonte International, but with his usual dash and distinction Shadwell's Baaeed (GB) (Sea The Stars {Ire}) made light work of the York feature to bring a large measure of both delight and relief to Sheikha Hissa Al Maktoum and William Haggas. The race is a qualifer for the GI Breeders' Cup Classic at Keeneland in November. Always travelling well within himself detached from the strong pace set by High Definition (Ire) (Galileo {Ire}), the 2-5 favourite cantered to the flanks of Mishriff (Ire) (Make Believe {GB}) heading to the furlong pole and when set alight by an ice-cold Jim Crowley soon after delivered his sprinter's surge to annihilate last year's impressive winner. Strong to the line as fears that he was in defiance of his pedigree as just a miler melted away, the homebred had 6 1/2 lengths to spare over the Gosdens' title-defender there, with the 100-1 shot Sir Busker (Ire) (Sir Prancealot {Ire}) another 2 1/2 lengths away in third. “He has everything. He is an easy ride and was on it today,” Crowley said. “He is just the perfect racehorse.”

WOW, And that is why he's the best racehorse in the world, Baaeed makes it 10 from the 10 in devastating fashion in the Group 1 Juddmonte International Stakes for the team of Jim Crowley and William Haggas. @JuddmonteFarms @JimCrowley1978 pic.twitter.com/qQBg4My6QC

Had Baaeed not looked so spectacular at a mile, all the evidence would have pointed to this extended 10-furlong trip being an optimum or even a minimum but the manner of his wins pre-QEII in 2021 painted him more as a freak of pedigree. By beating Palace Pier (GB) (Kingman {GB}) in that mile feature of Ascot's Champions Day, he did little to dissuade the doubters and after the show of force on his return in the May 14 G1 Lockinge S. at Newbury it was beginning to look as if he was cut-and-dried at that trip. After upstaging Nature Strip (Aus) (Nicconi {Aus}) in terms of closing sectionals at Royal Ascot and playing with his rivals in the Sussex, he was entering a new sphere in this test with the majority still uncertain how far the elastic would stretch. With those misgivings surrounding this bid, he was 2-5 purely because he is a brilliant colt and they tend to be able to do anything asked of them.

High Definition was on hand to space out the protagonists here and with Mishriff putting his recent slow-starting tendency behind him as he raced into a clear second, the pressure was on Crowley to time it right. Any anxiety was hard to gauge from the rider, who allowed his mount to coast with only Sir Busker behind and presented everyone with a moment of deja vu as he slipped the favourite between rivals in early straight much as Mick Kinane had on the sire in 2009. Granted cover there, Baaeed locked on to Mishriff and by the time they had passed the two pole all the visual signs were pointing only to an easy extension of his unbeaten record. Once he had control, the homebred who had idled at Goodwood galloped out to the line to open up a margin not only on Mishriff but also on the rest of the world's elite which should prove impossible to bridge from here until the end of the year.

William Haggas has his eye on the G1 QIPCO Champion S. now, resisting temptation to try the Arc much as the late Sir Henry Cecil had with Frankel (GB) 10 years earlier. “He can't do both and we wanted our finale in the Champion S. and that has always been the plan,” he said. “It was a spectacular performance and I'm glad now that everyone will believe me. We think he is fantastic and have felt so for some time. He clearly stays it well, it was a superlative performance and it was very satisfying to see him on the bridle a furlong and a half out. We had a little scare with a veterinary issue before the race, which I will deal with later, and those sort of things add to a bit of pressure.”

Elaborating on that, Haggas who was fined £140 by the stewards who ruled that Baaeed was “showing signs of a skin condition” for which the trainer did not have the correct paperwork explained, “Apparently the vet saw some spots on his neck which he thought was ringworm, but I can assure you he never had any spots when he left the yard and when I went to saddle him I couldn't see any. I just felt it was unnecessary and I hope they don't think we don't know what we're doing. It was probably a heat rash.”

Angus Gold commented, “There were many whose judgment I respect who said we were mad, that his stride pattern suggested he wouldn't stay and that he was too quick, so it's always nice to see that one's judgment is spot-on. For me the Arc is the greatest horse race in the world and I can't think of anything better than winning it, but the plan was always the Champion and that is Plan A.” Sheikha Hissa added, “He has proven he is versatile and this is the right distance for him obviously. I don't think the Arc is for him, I think it will be the Champion S.”

John Gosden was one of the chief exponents of Baaeed's stamina for this trip beforehand and was taking a heavy defeat for Mishriff on the chin as a result. “He has run great, absolutely,” he said of the runner-up. “I was saying earlier that I thought Baaeed will actually be a better horse over this trip and that he has been crying out for it. Mishriff has done nothing wrong and we are very happy with him. We probably could have done with good-to-firm ground rather than the rain they had overnight, but no complaints whatsoever.”

William Knight said of the G2 York S. winner Sir Busker, who is unexposed at this trip, “He was slow away, which he has done a couple of times now and I'm not sure why. I think when we really looked at it, that was the best possible position we could finish and that was fantastic. He might have a little break now, as he has had a long season. He started off quite early and has had some hard races, but we will sleep on it. Australia has been mentioned–the Cox Plate–or potentially Bahrain.”

Baaeed's dynasty has been will-discussed by now, with his full-brother Hukum (Ire) capturing the G1 Coronation Cup in June in what could be his career swansong. Their dam Aghareed (Kingmambo), who was successful in the Listed Prix de Liancourt, is a daughter of Lahudood (GB) (Singspiel {Ire}) who achieved champion grass mare status with wins in the Breeders' Cup Filly and Mare Turf and Flower Bowl Invitational. The fifth dam is the renowned Height Of Fashion (Fr) (Bustino {GB}), who got the Shadwell ball rolling in the late 80s by supplying the superstar Nashwan and smart Unfuwain and later also produced Nayef who took this race in 2002. Aghareed also has the unraced 3-year-old filly Zaghaareed (GB) (Intello {Ger}), the 2-year-old colt Naqeeb (Ire) (Nathaniel {Ire}) and a yearling colt by Night Of Thunder (Ire).