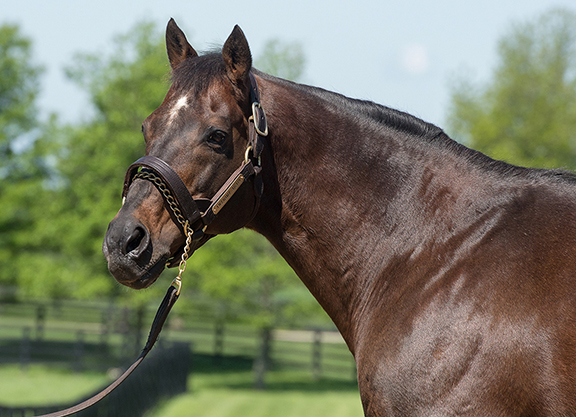 The exact cause of death is unknown. A full necropsy is pending and a full veterinary report will follow.

The Canadian-bred had an exemplary resume as both a racehorse and a stallion. He broke his maiden at Hollywood Park in just his second start as a 3-year-old in 1997. He returned a few weeks later to capture that year's Queen's Plate S. at Woodbine. Back in the U.S. that summer the Stronach Stables homebred went on to win the GII Jim Dandy S. and was third in the GI Travers S. at Saratoga.

At four, he completed an undefeated season that included five graded stakes victories, among them the GI Stephen Foster H., GI Whitney H., and one of the most memorable editions of the GI Breeders' Cup Classic, where, looking defeated, he rallied in the stretch to defeat Coronado's Quest and Swain and that year's GI Kentucky Derby-Preakness hero, Silver Charm.

As significant in the breeding shed as he was on the track, Awesome again sired three champions: Ghostzapper, 2004 Horse of the Year and champion older horse; Ginger Punch, 2007 champion older mare; and Nominee, a multiple champion in Trinidad and Tobago.

Awesome Again had been retired from stud duty at Frank Stronach's Adena Springs in 2019 and was pensioned to Old Friends in October of this year.

“Anyone who ever saw Awesome Again on the racetrack or at Adena Springs knew he was aptly named,” Michael Blowen, founder and President of Old Friends, said. “I'm just sorry his time at Old Friends was so short because I know he would have made a searing, lasting impression on his many fans, and I'm so sorry that circumstances prevented him from displaying his greatness for a lot longer. Awesome, indeed.”