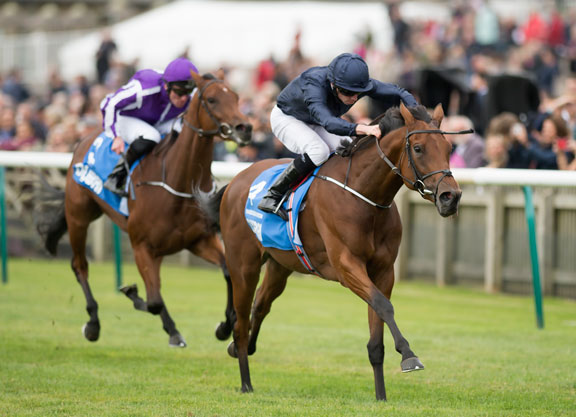 Aidan O'Brien has already got the Breeders' Cup at Del Mar in mind for two of his star fillies. Both Rhododendron (Ire) (Galileo {Ire}) and Alice Springs (Ire) (Galileo {Ire}) could well have California in November on their agenda with Rhododendron still taking things easy following her mishap in France when she was pulled up with a burst blood vessel in the G1 Prix de Diane Longines at Chantilly last month.

“Rhododendron is grand and she is cantering away,” O'Brien told The Racing Post. “She's still on the easy list and we haven't stepped her up in work just yet. Everything has been perfect since France, but because it was so traumatic for her we just have to take our time with her.”

Rhododendron looked a filly of the highest class when winning the G1 Dubai Fillies' Mile at Newmarket last October, but this season hasn't gone entirely to plan having also been beaten favourite in both the G1 QIPCO 1000 Guineas and the G1 Investec Oaks. However O'Brien is happy to sit out this part of the season with an eye to later in the year.

“We have our eye on the Breeders' Cup and maybe we might give her a prep beforehand, but we're not in any major panic just yet about plans, we're just concentrating on building her back up and are feeling our way.”

O'Brien has not had much luck with his older fillies this year; Minding (Ire) (Galileo {Ire}) is doubtful to be seen this year, G2 Dahlia S. winner Somehow (Ire) (Fastnet Rock {Aus}) had to be put down following a gallops injury and more recently the Group 1 placed Promise To Be True (Ire) (Galileo {Ire}) has been retired. However, the trainer is optimistic of getting triple Group 1 winner Alice Springs back for an autumn campaign. She made her seasonal debut at Naas in April when second in the G3 Gladness S.

O'Brien said,  “Alice Springs is in a similar situation to Rhododendron. She's back cantering every day and could go to the Breeders' Cup as well, but she'd definitely need a prep run beforehand.”