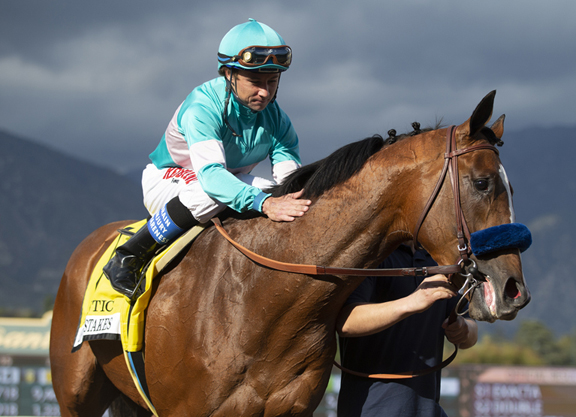 “Authentic is really doing well. I see him turning the corner,” trainer Bob Baffert said. “Both of my horses [Authentic and Thousand Words], I think they're live. We just need some luck, you never know what is going to happen with that many horses in there.”

Authentic, second behind Honor A.P. (Honor Code) in the June 6 GI Runhappy Santa Anita Derby, is coming off a narrow victory in the July 18 GI TVG.com Haskell S. at Monmouth Park. He is scheduled to arrive at Churchill Downs Monday on a flight from Southern California.

Jim Bakke and Gerald Isbister's Attachment Rate (Hard Spun) tuned up for the Derby with a five-furlong work in 1:01.20 (17/47) at Churchill Downs Sunday. The chestnut colt is coming off a runner-up effort behind Art Collector (Bernardini) in the Aug. 9 Runhappy Ellis Park Derby.

“I thought his race at Ellis made him worthy of trying the Derby,” trainer Dale Romans said. “This was his second work back from that race and we wanted to put a nice five-eighths move in him. He ran well over the winter in both the Gotham and the Unbridled. He hung in there pretty well to finish second behind Art Collector at Ellis.”

Attachment Rate was third in the Mar. 7 GIII Gotham S. and second in the Unbrided S. at Gulfstream Park Apr. 25. He was fourth in the May 23 GIII Matt Winn S. and fifth in the July 11 GII Toyota Blue Grass S.

Jim and Donna Daniell's Rushie (Liam's Map) will skip the Derby in favor of Saturday's GII Pat Day Mile, while trainer Todd Pletcher confirmed Sunday that Bob LaPenta and Bortolazzo Stable's Money Moves (Candy Ride {Arg}) will start in the Run for the Roses. The bay colt opened his career with a pair of wins at Gulfstream Park this past spring and missed by just a neck when stretched to nine furlongs in a Saratoga optional claimer July 25. He worked five furlongs at Saratoga Friday in 1:00.14 (10/17).

“The horse ran well last time and he's been training sharply,” Pletcher said. “I felt like this is an opportunity that you don't get very often, so we're taking a shot.”