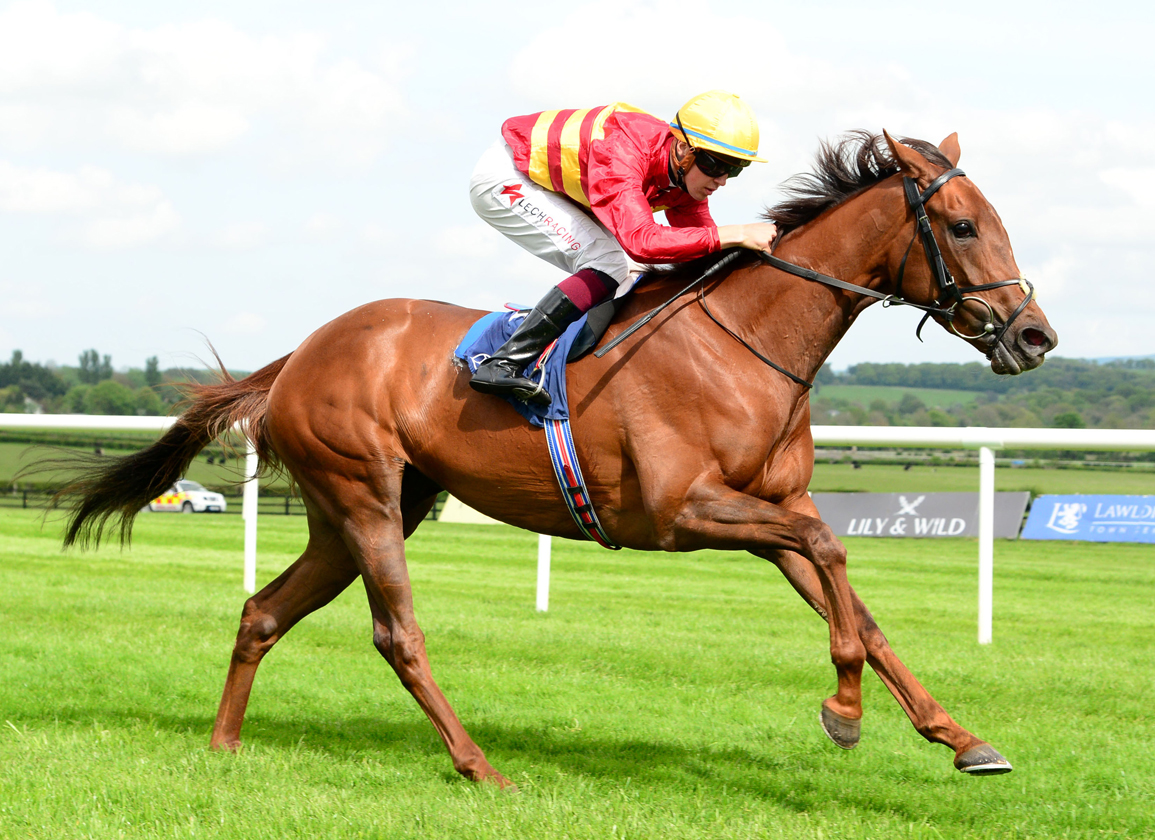 Six days after the G1 Prix Ganay victory of her half-brother State of Rest (Ire) (Starspangledbanner {Aus}), Teme Valley Racing's Tranquil Lady (Ire) (Australia {GB}–Repose) kept the family honour well and truly intact with an authoritative success in Naas' G3 Irish Stallion Farms EBF Blue Wind S. Sent off the 3-1 joint-second favourite in what appeared to be a tight contest, the chestnut who had been fourth in Navan's Listed Salsabil S. on her 3-year-old bow Apr. 23 travelled sweetly in third early under Dylan Browne McMonagle. Cruising to Ballydoyle's 11-4 favourite Lily Pond (Ire) (Galileo {Ire}) two out, she was sent on into a clear advantage soon after and relished the run to the line to hand that rival a four-length thrashing, with another 5 1/2 lengths back to the winner's stablemate Tosen Lydia (Ire) (The Gurkha {Ire}) in third. Joseph O'Brien admitted he hadn't been considering the G1 Cazoo Oaks for the impressive winner, but could be in for a change of heart. “She popped her head up today as if she should be going there,” he said. “It wasn't the plan, but it's definitely a conversation we'll have with Richard and Jim [Cockburn] now. We kind of had the Curragh in our minds, but we have to certainly talk about it now.”

Tranquil Lady, who had been second to the smart Limiti di Greccio (Ire) (Elzaam {Aus}) in The Curragh's Listed Staffordstown Stud S. in October, was paying a compliment to the Salsabil one-two Concert Hall (Ire) (Dubawi {Ire}) and Magical Lagoon (Ire) (Galileo {Ire}) here but her trainer believes she was not seen at her best on that occasion. “I don't know why she didn't really fire in Navan, it wasn't a bad run and it was probably a good race but we were hoping for more and it's nice to see her doing it today,” he revealed. “This was plan b to come here, to be honest, but she came out of Navan well and we thought it was a suitable race. I was a bit worried about the [easy] ground and [Teme Valley racing manager] Richard [Ryan] convinced me to run her. I don't think she wants it too soft, but she handled it well and Dylan gave her a lovely ride.” Of the yard's well-regarded Tosen Lydia, who met with defeat for the first time and was left behind by the front two, he added, “She probably won't go to the Oaks. We think she's a good filly, but I'm not sure if she might be best at a mile.”

Tranquil Lady is the third foal out of the unraced dam, with the second State of Rest already a G1 Cox Plate and GI Saratoga Derby Invitational hero prior to his weekend exploits in ParisLongchamp. The second dam Monaassabaat (Zilzal) took the Listed Virginia S. before producing the listed scorers Prince Alzain (Street Sense) and Echo River (Irish River {Fr}), with the latter also second inn the G3 May Hill S. She is also the second dam of the G2 Royal Lodge S. and G2 Vintage S. runner-up Artigiano (Distorted Humor) and listed-placed Dubai Legacy (Discreet Cat).